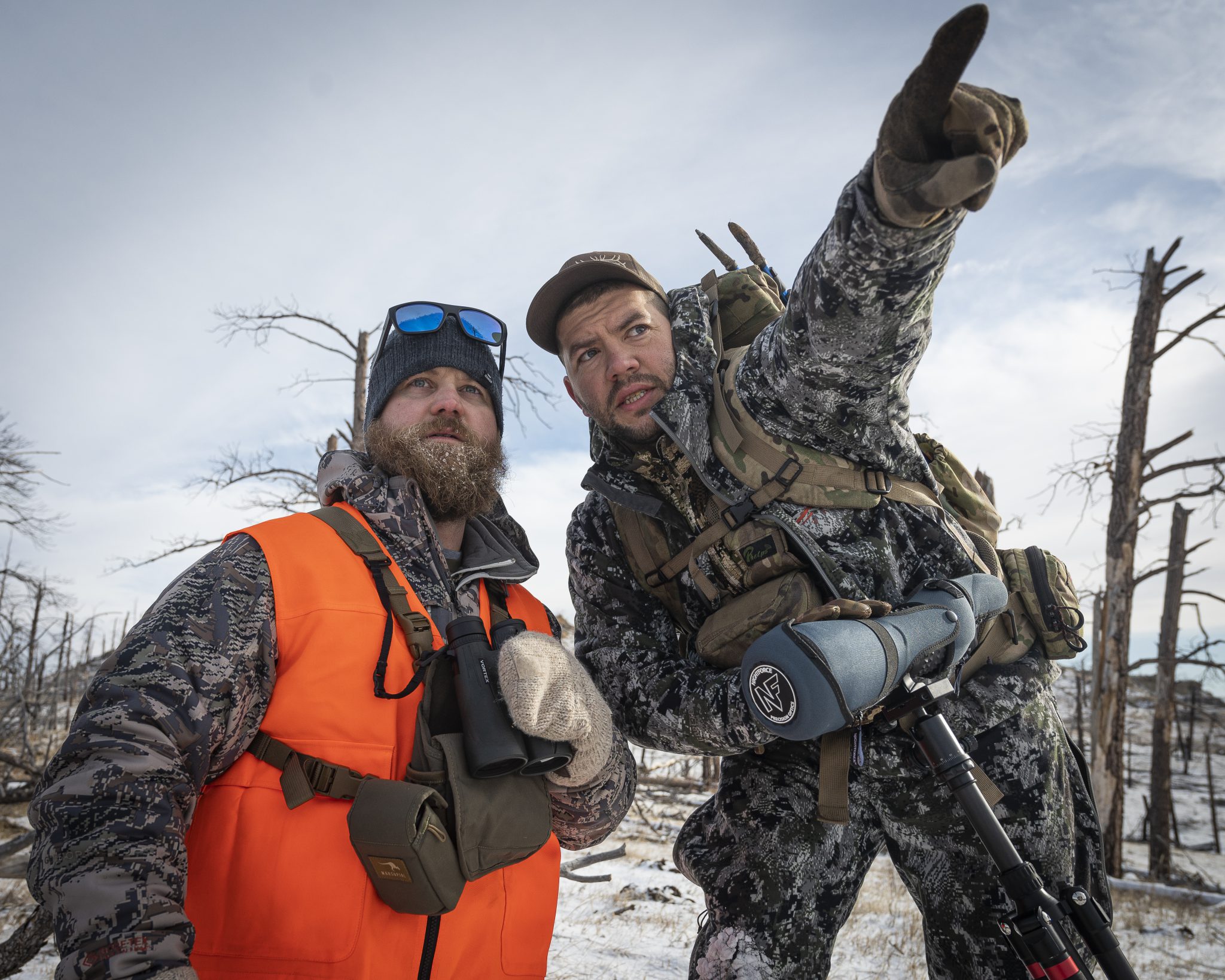 This article was originally published on Dec. 6, 2020, on Coffee or Die Magazine.

Steve Houghton’s rugged face shone orange in the firelight as he pulled in a deep breath of the frigid Montana backcountry air and shifted in his chair before taking his turn at a personal story. The stress lines of an often-furrowed brow and eyes tinged with sadness advertised the toll of an especially bruising year for the former motor transportation Marine.

The snipers and special operations soldiers around the campfire were half-expecting a familiar tale of combat trauma and trouble transitioning to civilian life. If anyone in the group of 17 military veterans had a thousand-yard stare, it was Houghton.

A crackle from the fire disturbed the brief silence as the circle waited for him to speak.

“You know, I didn’t know how much I needed this,” Houghton said with a somber Montana drawl as he opened up to the men and women who two days earlier were complete strangers. “It’s been a rough 2020 for me, and before I came out here, I was in pretty bad shape. I went through a divorce, and I’ve struggled with other issues. But the last two days have put a smile on my face even while I was sleeping.”

Houghton and 16 other military veterans traveled to eastern Montana’s vast swath of public lands Nov. 6 through 10 for an inaugural event hosted by Backcountry Hunters & Anglers (BHA), a nonprofit committed to preserving North America’s outdoor heritage of hunting and fishing in a natural setting through education and advocacy on behalf of wild public lands and waters.

After launching its Armed Forces Initiative in June, BHA developed its first-ever Veteran Dual Skill Acquisition Camp, where BHA mentors covered skills such as e-scouting, shot placement, field-dressing, meat considerations, carcass disposal, and education about public lands and related legislative issues. But as Houghton and the others quickly learned, the best parts of camp weren’t listed in the promotional materials that drew them to the event.

“I’ve been on my own for quite a while now, and I was kind of getting into a real rough spot just before I came out here,” Houghton continued. “But getting out in the woods with a bunch of veterans has made a world of difference. I feel supported on multiple levels, and it just feels really good. I’ve learned so much, and I think this is about the most therapeutic stuff I’ve experienced since I got out of the Marines. It gives you back that sense of camaraderie and that mission that, once you’re out, you just lack in life.

“This gives me hope for the future with myself and other veterans that are struggling to find a sense of meaning again. Just being around everybody and seeing that you’re not alone, it’s been absolutely incredible — absolutely lifesaving. You’re saving lives with this.”

Knowing nods and grunts of approval from Houghton’s newfound tribe validated his sentiments. There was the sergeant major from the 19th Special Forces Group, the recently retired special operations pilot, Marine snipers and grunts, Army snipers and other soldiers, sailors, National Guard members, and an Air Force member who cheerily absorbed all the standard trash talk that always gets heaped on extra thick for members of the “Chair Force.”

Morgan Mason, BHA’s Armed Forces Initiative coordinator and a former Army intelligence analyst, coordinated the camp. Mason was 20 when he participated in the invasion of Iraq in 2003.

“When I left the Army, I just wanted to head West and break free of everything,” Mason said. “I spent a lot of time on public lands, and they were my source of decompression. I thought it was amazing that I could go do all these outdoor activities — whitewater rafting, mountain biking, climbing, hunting.”

Mason said his experiences led him to the path he’s on now. His passion and mission are to make sure all military members and veterans can have the same experiences outdoors that were integral to his transition and that continue to enrich his life. For BHA’s Armed Forces Initiative, he focuses on three pillars: active-duty programming, veteran programming, and legislative efforts.

BHA has forged a unique relationship with the US military to develop its active-duty programming initiative. It has partnered with several major military installations, including Fort Bragg, North Carolina, and Camp Pendleton, California, to promote outdoor activities on public lands among military members at those locations and others.

“Spending time outdoors is like a reset button for your brain,” Mason said. “For military members and veterans who are dealing with issues like post-traumatic stress, survivor’s guilt, or opioid addiction, outdoor activities like hunting aren’t a cure-all, but having these experiences makes you a better person because they destress your mind by dumping some dopamine into your brain and making you feel good. We want people to feel the weight of the world drop off their shoulders and feel that stress melt away, and public land makes that possible for everyone.”

Mason put together the veteran camp as a pilot program for the veteran programming pillar, picking a diverse group of veterans — both mentors and mentees — from a pool of candidates who applied for the mule deer and whitetail hunt in Montana.

“We tried to bring folks of various skill levels and experiences,” Mason said. “Some are first-time hunters — never shot a deer until this camp — and some have been hunting since they were kids.”

Mason organized the camp around two focus areas: tactile and cerebral. The tactile portion covered skills such as stalking, glassing, and other field tactics. The cerebral portion consisted of campfire talks and bonding over shared experiences and public lands education.

One of the topics around the campfire was the Accelerating Veterans Recovery Outdoors Act, which President Donald Trump signed into law Dec. 5. The bipartisan legislation requires the Secretary of Veterans Affairs to establish an interagency task force on the use of public lands to provide health and wellness for veterans through outdoor recreation, meaning the federal government will study the health benefits of trips and activities like BHA’s veteran hunt.

It didn’t take long for fast friendships to form in the teams and hunting parties Mason organized. Houghton hooked up with BHA mentor and former Idaho National Guardsman Matthew Carlock and husband-and-wife-duo Andrea and Patrick Nofio — both Navy veterans — to form “Team Send It.”

Carlock’s stocky frame and boundless energy in the backcountry terrain earned him the moniker “The Mountain Goat,” and after Houghton bagged his first of four deer, Carlock helped pack the whole animal back to camp so he could give a demonstration on how to field-dress a deer, a vital skill that several first-time hunters put to use in short order.

On the second day of camp, Andrea earned her nickname, “Eagle-Eye Andrea,” when she spotted at about 300 yards a beautiful six-pointed mule deer buck at the 11th hour of a long day of following the Mountain Goat up and down endless ridges and valleys in frigid conditions. The Alaska native said she “saw every wild animal you could ever see” growing up in the Great North State, but her father, who raised four daughters, never took her hunting.

“I’d been thinking about it for a long time, but there’s so many barriers to entry,” Andrea said about finally learning to hunt with BHA’s support. “Hunting is expensive. You need a mentor, and you need to just be really intrepid.”

Andrea said she and Patrick jumped at the opportunity when they heard about the Montana hunt because it removed a lot of the intimidation factor they felt.

“The vast knowledge that is shared freely by everybody here has just been amazing,” Patrick said. “We’re checking off bucket list items with this trip, getting out here and finally putting the miles down, and being able to share in the pride and camaraderie of harvesting an animal with all these awesome veterans — it’s really meaningful and just an absolutely phenomenal experience.”

Around the campfire each night, a common theme kept permeating the conversation: Nobody gets veterans like other veterans.

Healthy competition, trash talk, and crude humor were sources of bonding throughout the weekend.

After former Army sniper Jim Vinson shared his personal story around the fire one night, he couldn’t help but end with a flex: “I smoked a doe last night at 511 yards, so somebody needs to top that.”

On a long hunt the day after Andrea bagged her buck, Carlock — The Mountain Goat — promised Team Send It they’d likely find deer if they’d follow him for yet another long push to a far-off ridge.

“Yeah, we’ve heard it before, Matthew,” she said. “Just the tip, just for a second, just to see how it feels.”

Houghton, who needed eight rounds to bag his four deer and was dubbed by his Team Send It brethren “Two-Shot Steve,” howled at the joke. “I love veterans,” he said.

Andrea, who is currently enrolled as a college student in Montana, said, “Yeah, I don’t usually get to make those kinds of jokes these days. I really miss being around veterans.”

After three days, on the Marine Corps birthday, the veterans broke down the camp. A handful of them held a small ceremony, taking down the American flag that had flown proudly at the entry path and folding it in accordance with military tradition. Together, they had killed 18 deer over four days and would feed their friends and families for months to come.

They shared some hot coffee on a final cold morning together, traded hearty hugs, handshakes, and contact information, and left for home — batteries recharged by new friendships and experiences and with plenty of great stories and newfound respect for public lands to share with friends and family. 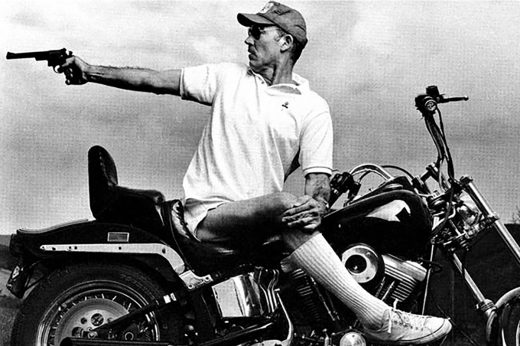 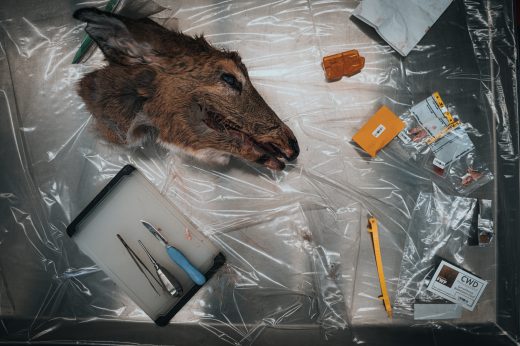 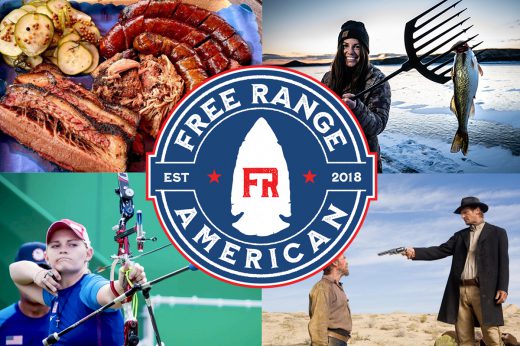