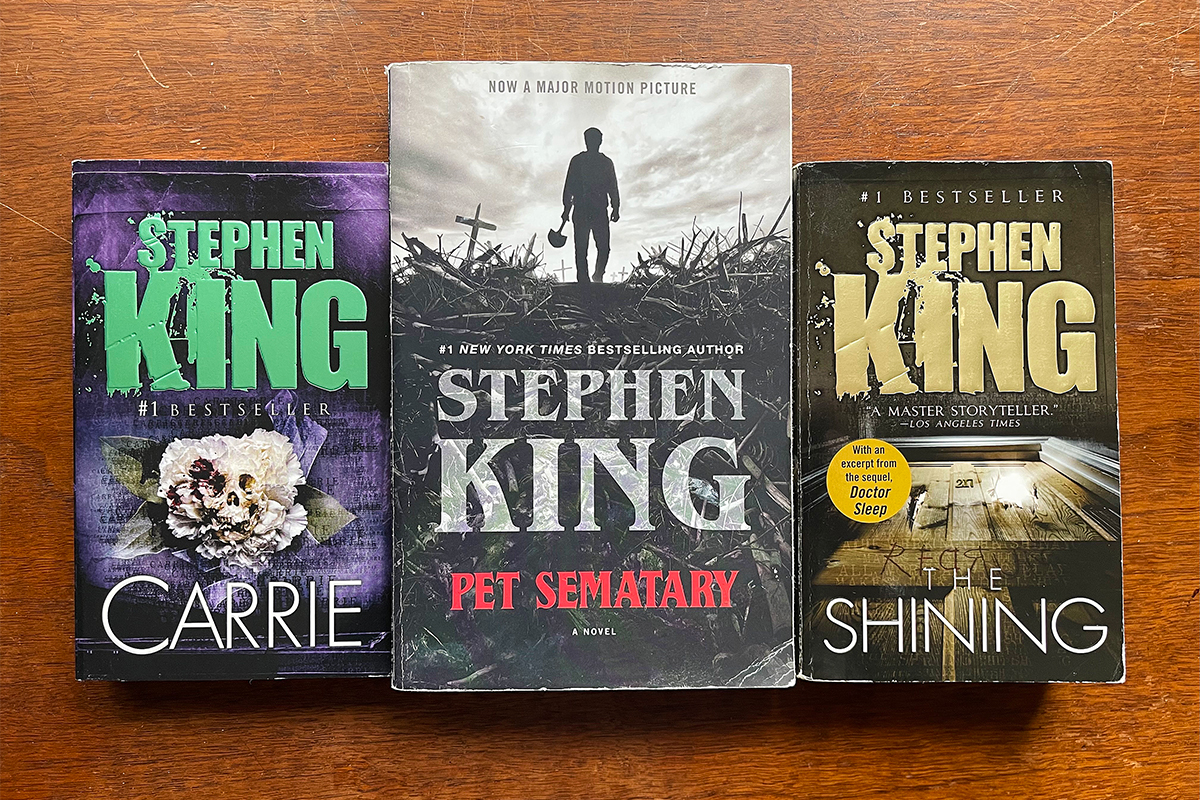 Master of horror Stephen King has collected interesting anecdotes and real-life characters since before he was a teenage gravedigger, saving them to weave into future stories. Luckily, the frighteningly prolific author seems to run into an above-average number of weird real-life scenarios, offering plenty of fodder for his more than 60 novels and hundreds of short stories.

Here are the true stories behind three of his twisted tales.

Carrie, King’s first published novel, tells the story of a friendless, bullied high school girl whose abuse continues after the final bell when she returns home to her ultrareligious mother. King comes from a long line of Methodists and listened to plenty of fire and brimstone as a child, so it’s not surprising that religious iconography is pervasive in his stories.

The title character in his debut novel is based on two girls he went to school with — although neither of them manifested telekinetic abilities in real life. One was a girl whose mother gave her children only one set of clothes that had to last the entire school year, from September to June. The girl was quiet and always sat in the back row but was the target of merciless ridicule that continued even after she got new clothes, according to Lisa Rogak’s book Haunted Heart: The Life and Times of Stephen King.

Students shunned the second girl because she suffered from seizures and dressed strangely. She lived in a trailer near King’s house, and her mother hired King to move some furniture since the young writer often did odd jobs for neighbors to make money. When he went to the trailer, he was struck by a giant crucifix that towered over the living room and had a frighteningly realistic Jesus figure, complete with blood dripping from the hands and feet. The girl’s mother asked King if he’d been saved, and he left the trailer as quickly as possible.

Tragically, both women were dead by the time King started writing the book. One took her own life, and the other died from a seizure.

King’s third book, The Shining, follows a family’s stay at a haunted hotel as the young son is tormented by psychic visions and the father descends into madness. But the story may never have come to be if not for a one-night trip King took with his wife, Tabitha, while they were living in Colorado.

The night before Halloween in 1974, the Kings left their kids with a babysitter and headed for the Stanley Hotel in Estes Park, Colorado, according to Haunted Heart. Before long, the couple drove past a sign that read, “Road may be closed after October.” When they got to the remote hotel, they learned it was the last day of the season before it closed for the winter. They were also the only guests.

Nonetheless, the orchestra serenaded the couple as they sat alone in the dining room, surrounded by tables with chairs turned upside down on top of them. Further adding to the atmosphere, a loose shutter flapped in the wind, banging against the window all night.

By the time King and his wife returned to room 217 that night, he already had the entire book in his mind. He’d been playing with the idea of a story about a child with extrasensory perception, and once he saw the delightfully spooky setting at the hotel, it all came together.

Some of the evil urges that fictional father Jack Torrance experiences in The Shining also have roots in King’s own experiences. After becoming a dad, he was surprised by some of the hostile feelings and anger he felt toward his own children. He believed that, if he wrote about those feelings, it would prevent them from becoming actions.

Pet Sematary, King’s 1983 novel about a mysterious burial ground with the power to bring pets and people back to life, may have the creepiest origin story of all.

When King worked at the University of Maine in the late 1970s, the family rented a house on a busy highway. Speeding trucks killed so many animals on that stretch of road that the neighborhood kids had started burying them. It started with small animals such as birds and squirrels that they would entomb in a backyard sandbox, but they eventually had to expand to a full-fledged graveyard in the woods full of cats, dogs, and even a goat. A misspelled sign greeted visitors to “Pet Sematary.”

“One of the kids would have his wagon, put the body in the wagon, and wheel it to the cemetery,” a neighbor said in a 1987 edition of Stephen King’s fan newsletter, Castle Rock. “They’d hold a ceremony, dig the little graves, bury them, and make the markers.”

At least 30 kids tended the cemetery, according to the newsletter cited in Haunted Heart.

A truck eventually hit King’s daughter’s cat, and it joined the other dearly departed animals in the neighborhood necropolis. King’s youngest son, then a toddler, made a break for the highway one day. Unlike in the novel, he never made it to the road. The toddler either tripped, or his frantic father grabbed him. King can’t recall clearly as he recounts the incident in the introduction to the audiobook. But the close call deeply disturbed King, and he poured it into the pages of what he has often called his most terrifying book.