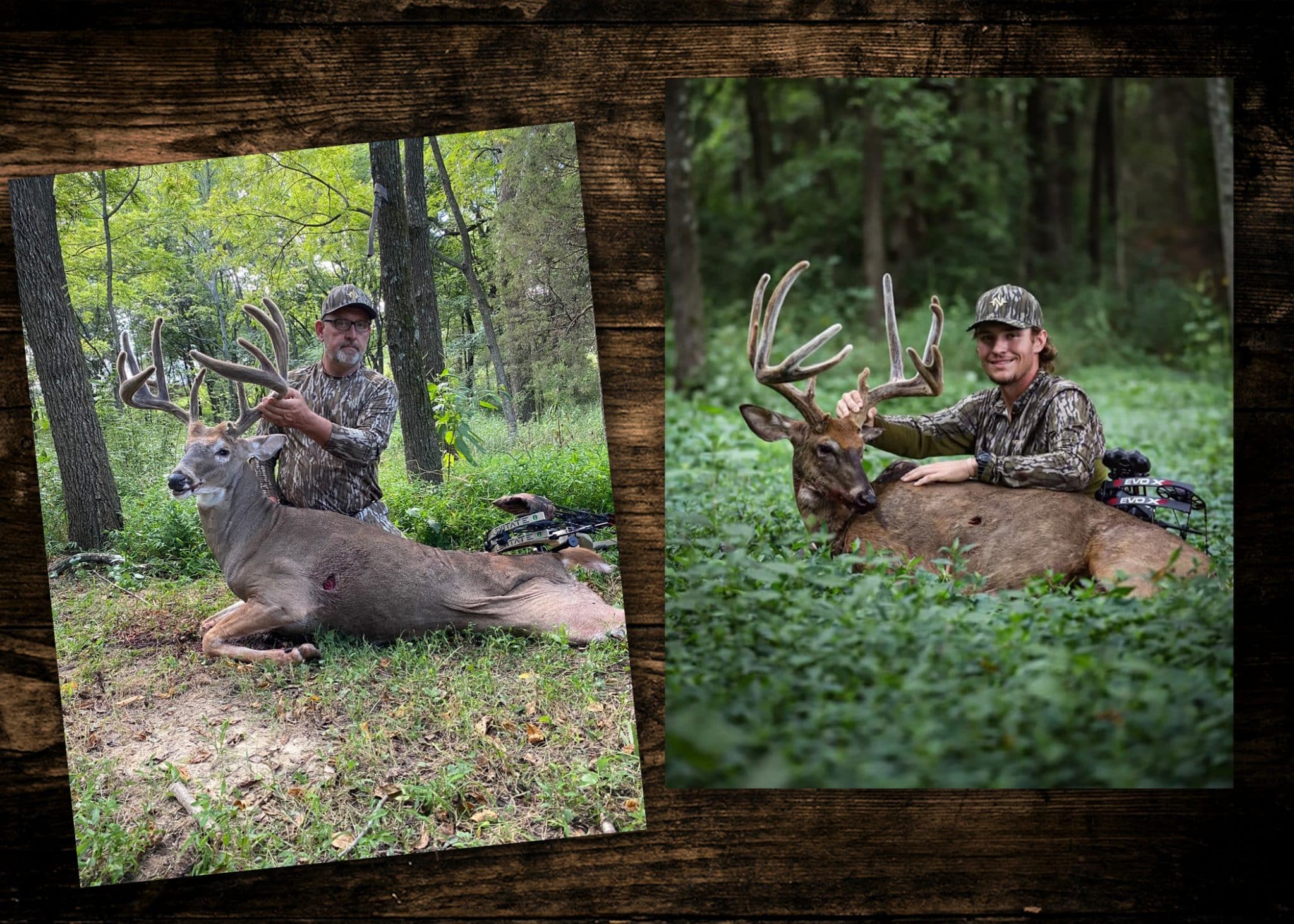 Tagging a velvet buck with a bow is rare, but tagging a Pope and Young velvet buck is about as rare as a flying unicorn. A father and son both tagging trophy velvet whitetails in early bow season — on the same day — is just bonkers-level rare. That’s just what Robbie Ammons and his son, Garrett, did on opening day in Hardin County, Kentucky, this season.

Robbie, 58, killed his first-ever velvet whitetail buck on the first morning of Kentucky’s archery season. Although any buck in velvet is special, Ammons’ buck is extra special — not just because it is a monster, but because his son got his own trophy velvet buck later that day just a few miles away.

Robbie had been chasing his wall hanger for more than three years, and he has the horn to prove it.

“I got one shed when he was 3 1/2 [years old] and both sheds from when he was 4 1/2. Then, he just disappeared. Gone. Never had a picture of him all last year. I knew he lived through hunting season because I found his sheds. I thought maybe he got run over or something,” Robbie told Free Range American.

“Then, I saw him through the spotting scope in early July. I immediately called my son, Garrett, and said, ‘I’m looking at that big deer. He’s here, and he’s alive!’” he said.

Robbie immediately set up trail cameras in the area and managed to get several pictures that confirmed the buck he saw through his scope was the one he’d been chasing for several seasons.

“The last week of August, I opened up one of the cameras, and it had 37 pictures on it,” he said. “I thought there was no way those are him, but when I checked the pictures later that night, 34 of those 37 pictures were of him. I said, ‘Oh boy, you have messed up now!’”

After that, Robbie got a picture of the big buck every morning between 7:20 and 8:20 a.m. He did what any self-respecting deer hunter would do — he put up a stand.

“Saturday morning, the opening of the archery season, I drove around the bean field and came into my stand from the back side. I got up in my deer stand about 5:30 [a.m.],” he said. “That’s way early, but I wanted to make sure everything was calm before he came through.”

Robbie normally speaks with a slow, buttery Kentucky accent, but when he tells the story about the morning he shot his monster velvet buck, he starts talking fast, tripping over his words.

Almost two hours later, Robbie saw a dark spot at about 75 yards that he hadn’t seen when he first sat down. When the dark spot moved, he grabbed his binoculars.

“I immediately knew it was him, so I stood up and got my bow. It took him about 5 or 6 minutes to come 50 yards,” he said. “He was the most cautious deer I’ve ever seen come through the woods.”

“He finally walked up there to 24 yards. When he had his head in behind some little saplings, I drew back and set my pin right on his ribs.”

Robbie knew it was a good shot as soon as his arrow left the bow.

“I watched him go about 80 yards with his tail twitching. Then when he went out of sight, he was running sideways,” he said.

That’s when the excitement of the moment finally hit him.

“I don’t know if it was the adrenaline leaving or if all of it was just rushing in, but that’s when I had to sit down. I really had to think about what I was doing because I was liable to just walk right out of the tree,” he said.

Measuring 185 4/8 inches, Robbie’s velvet buck is the third largest he’s tagged in his hunting career and his largest typical buck ever. (P&Y requires a 60-day drying period before official scoring.)

Twelve hours later, and about a dozen miles away, Garrett, 24, tagged his own velvet monster.

Unlike his dad, Garrett didn’t have a years-long relationship with his deer.

“I don’t have any history with this deer,” he told Free Range American. “I got one picture of him on July 24. Obviously, he was far from done growing, but I knew he was going to be a deer that I needed to pay attention to.”

Other than a few random trail camera pictures, Garrett didn’t see the big buck much after that, and it started to keep him up at night.

“One night, I laid down in bed, and I said, ‘Tomorrow after I get off work, I’m going over there because I have got to figure out where this deer is.’”

After work the next day, Garrett went to the opposite side of the farm to set up a new trail camera.

“I went to the complete opposite side of the farm. We’ve never had a camera over there or run any feed before, but there’s a real nice creek bed that runs through it. Our corn butts up to it, and there’s a big block of timber on the other side. I found some really good sign crossing that creek and around the edge of the cornfield,” Garret said.

“I put a camera up, and sure enough, the next day, the very first deer that shows up is him. From then on out, there hasn’t been a day that he wasn’t there,” he added. “There was actually a high spot about 200 yards away where I could sit down there and watch where he’d be coming out from. I went over there about eight times, and six of the eight times, I laid eyes on him in person.”

Garrett was just hoping the buck wouldn’t lose his velvet before the archery opener. Luckily, the fuzzy antlers held, and everything worked out in Garrett’s favor.

“Archery season opened up on Saturday, and I didn’t go that morning because I had plans,” Garrett said. “I had a friend’s bachelor party that weekend, but I made it well known that if I got this deer on camera, I was going to skip out on the afternoon activities to go hunt this deer.”

And that’s precisely what he did. The wind was perfect for Garrett’s stand as he slipped into it in the early afternoon. When daylight was beginning to fade, a few does walked out, then a small 8-pointer with another small buck. Then out stepped the hog Garrett had been watching.

“He ran about 75 yards. I didn’t hear him crash, so I got ahold of dad,” Garrett said. “I just gave him a little bit of time, but I was pretty certain my shot was where it needed to be. It was.”

When Robbie arrived, the father and son duo trailed the deer to find a much bigger buck than they had expected. Garrett’s velvet monster measured 183 4/8 inches before drying.

Garrett’s buck also has some beautiful white lines of fuzz on his tines and beams that make him that much more stunning.

The men sat there for a few moments, sharing what Garrett described as “a very cool memory.”

“For him to do it that morning on a different farm with a deer he’s been after for 3 years, and then for it to work out that afternoon for me is just a memory I will never forget,” Garrett said. “A unique moment to share with my dad, who has taught me everything I know about deer hunting.”

Garrett killed his first deer when he was only 5, and he’s tagged plenty of bucks between that first one and the velvet toad he killed on opening day.

“I didn’t think he was paying a whole lot of attention all them years I was dragging him around the woods,” Robbie said of his son, “but this boy of mine is going to be a better hunter than me.”

Both deer were shot with PSE bows and Rage Broadheads. “I try to use the best equipment I can because if anything happens, I want it to be my fault, not my equipment,” Robbie explained.

Both Robbie and Garrett are already back out scouting for the next big buck. After all, the season is still young.

“This is what we live for,” Garrett explained. “We’re ate up with it. Every year, we can’t wait for September to get here. It’s when we get to do what we love.”

“I’m thankful God made me a bowhunter.”

GOOD GEAR – Never miss out on coffee during the hunt. Always lean on Black Rifle Coffee’s Instant Coffee in the field