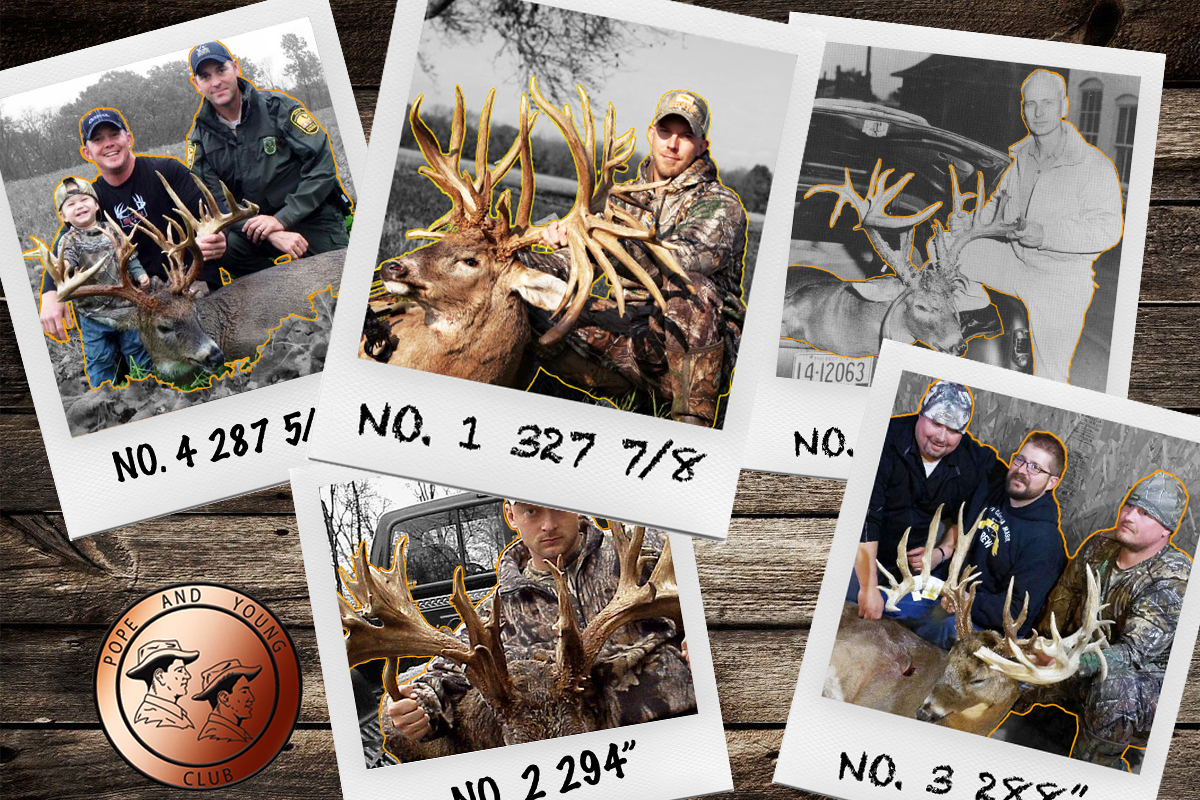 No big game animal causes more American hunters to burn vacation days and abandon all adult responsibilities than whitetail deer. From New England to Florida, New Jersey to Montana, and in all the bread-basket, rust-belt, and Great Plains states in between, whitetails rule as the No. 1 game animal in these United States. And the following world record non typical whitetail bucks stand as the biggest of the biggest: the largest archery-killed whitetails known to humanity.

Ohio, Illinois, Iowa, Nebraska, Kansas, and Missouri produce bucks like corn-fed linebackers. These six states account for all 10 of the world’s biggest archery-killed non typical whitetail deer: Illinois, Ohio, Iowa, and Kansas each have two, and Missouri and Nebraska each boast one.

The Pope and Young Club’s minimum score for world record non typical whitetail bucks is 155 inches, which would be a great deer, likely with a great camp story to match that would only get better with time. But to crack the top five, a whitetail must have nearly double that in antlers.

Related: How to Be a Better Archer: Focus on These 5 Bowhunting Fundamentals

Del Austin is the hero and villain in this classic 1962 hunting yarn. He’s a hero because he shot the Nebraska stud that held the non-typical P&Y world record for 40 years. He’s a villain because his buddy, Al Dawson, had dedicated five years of his life to killing “Mossy Horns” before Austin took him. Dawson had invited him out to hunt on the farm property that the huge buck called home.

Dawson had four years of history with Mossy Horns, several missed shots, and even one shot that hit the buck but only left a minor shoulder wound. As Dawson’s fifth archery season was winding down, Austin and two other buddies joined him on the property.

Austin set up a portable elevated stand in a tree on a raised area in thick brush. He was about to climb down for the evening when a big buck crashed through the thicket and stopped, almost broadside, at 20 yards. Austin drew his 45-pound Oneida recurve and put a Bear Razorhead-tipped arrow in Mossy Horns. The buck dropped 100 yards away, and Dawson’s hopes were dashed.

Related: How to Read Wind and Thermals to Get on Big Deer and Elk

No. 4 – The Christmas Tree Buck

When Dan Coffman first saw “Christmas Tree” on his trail camera months before the season opened, he immediately called his local Ohio DNR office and spoke with ​​wildlife officer Tony Zerkle. Even then, he knew that if he killed Christmas Tree, social media would blow him up and call it a high-fence deer.

When the season opened, Coffman set up shop in an area where he knew the buck was staying. With 15 minutes of shooting light left, the buck showed up, and Coffman waited for him to close the yardage. He passed on a 30-yard broadside shot, betting that Christmas Tree would walk even closer. He bet right. At 10 yards, Coffman arrowed the giant.

After he located the buck, Zerkle was his first call, and the officer joined him in the field. With that validation, Coffman’s buck faced very little trolling and joined Pope and Young history.

Related: So You Want to Shoot an Archery World Record?

When Deric Seick shot his record monster in 2016, he already had a 174-inch Iowa stud whitetail in the record books. But getting a shot at this 288 4/8-inch giant was a lesson in patience, frustration, and disappointment. Seick heard that the buck was around the property he hunted, but unfortunately, he was at a disadvantage. He was limited to ground tactics because the property owner didn’t allow elevated stands. Also, Seick learned the owner of the neighboring property missed a shot at the beast. At one point, Seick inadvertently jumped the buck in its bed, which put even more pressure on the animal.

Finally, in late November, Seick spotted the deer bedded by a creek and was able to stalk into a good setup and make a solid 45-yard shot with his Hoyt Carbon Defiant 34. His buck soon joined a storied list of world record non typical whitetail bucks.

Related: What a Hunting Plan For Out-Of-State DIY Whitetail Quests Should Look Include

According to Beatty, the story of this deer begins when he moved with his family from Pennsylvania to Ohio. The avid hunter had spent all summer scouting woods adjacent to an ag field in Greene County with his son, and they had consistently seen a big 8-point buck on the property. Beatty hoped he’d see him again once the season opened. On an early November afternoon, Beatty headed into the woods, climbed into his stand, and settled in to wait for some movement.

It was quiet for a while, so he called with a doe bleat. Almost immediately, the 8-pointer showed up. He never presented a shot and eventually walked off. Beatty hit the doe bleat again, and he saw antlers move in the thicket. What walked out, though, was not remotely what he expected.

A 39-point, 294-inch monster walked directly at him, poked his nose at one of Beatty’s scent bombs, and gave Beatty his opening — he took his shot. After a 250-yard tracking effort in the dark, Beatty heard a big snort, so he left the buck for the night. The following morning he and his son found the 4 1/2-year-old buck 30 yards from where he left its trail the night before.

Related: How to Score Whitetail and Mule Deer Trophies

Luke Brewster learned how to hunt after he left the military. The Marine veteran served multiple tours in Afghanistan and Iraq and was happy to have an outlet that got him outdoors and also put meat in the freezer for his growing family.

The Virginia resident also had the opportunity to hunt in Illinois on his dad’s family farm. His hunting partners on the farm had recent trail camera pictures of a massive buck, nicknamed “Mufasa,” that were jaw-dropping. They knew from images taken in previous years that he would get trophy-big as he matured, but what they saw defied belief. Brewster was hopeful, but rain doused their first morning in the woods.

That afternoon, as he watched a couple of does through his binoculars moving through a thicket, the buck of a lifetime suddenly appeared at a scrape only 26 yards from Brewster’s stand. Brewster drew his Hoyt RX-1, watched the giant animal scrape the ground a couple more times, thought to himself, “My arrow might just bounce right off him,” and sent his Grim Reaper broadhead on its way. The massive whitetail ran 40 yards before going down in a heap.

Just to put it in perspective, Mufasa’s score of 327 7/8 inches would qualify him for a non-typical Pope & Young record — if he was an elk.