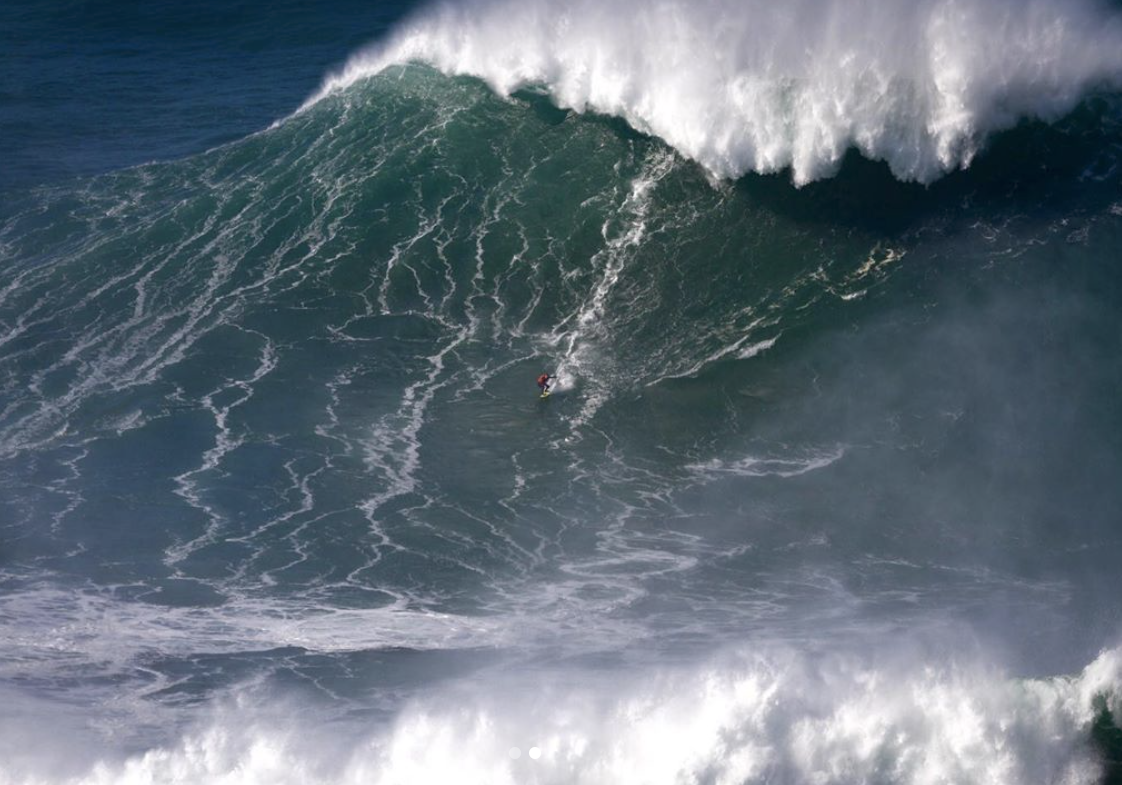 Catching a wave as tall as a seven-story building is a dangerous and complicated business. Mason Barnes is in that business. And business is good.

In October off the coast of Portugal, Hurricane Epsilon combined with a low-pressure system near Greenland to generate a nuclear-strength swell that rocked the entire European coastline. In a stroke of good luck, the globe-trotting American was in London when he got the news that a once-in-a-generation swell was on its way to the fabled coastal break of Nazaré, north of Lisbon, and home of the biggest waves ever surfed.

Barnes scrambled and got to Portugal. “It was the greatest day of my life,” he told Free Range American about Oct. 29.

It’s a logistical feat in its own right to arrive at one of the world’s best big-wave surf spots with the necessary equipment and personnel to surf big-ocean swells. The whole operation must be timed with the arrival of the all-important big waves — an environmental window that might only last a day or two. Big-wave surfing mirrors the logistical complexity and physical dangers of climbing 8,000-meter peaks like Mount Everest in the Himalayas. It takes a team and gear.

Monster waves are far too big and fast for surfers to catch by paddling under their own power. Rather, they’re whipped into the waves behind personal watercraft such as a WaveRunner or Jet Ski, holding on to towropes like wakeboarders until the wave’s gravitational pull takes over.

“I think someone rode the biggest wave in history yesterday,” Barnes said on the phone from Portugal. “It’s been crazy. It’s been giant for four days. Yesterday was by far the tallest day I’ve ever seen. It could have been the biggest day in surfing history.” Barnes estimated the wave heights off Nazaré, Portugal’s rocky coastline, reached at least 80 to 90 feet on Oct. 29.

Then he mentions his wave — the big one.

A native of Wrightsville Beach, North Carolina, and now living in Los Angeles, Barnes started big-wave surfing 10 years ago on the legendary North Shore of the Hawaiian island of Oahu. Since then, he’s traveled the world in search of the next big wave.

“As an athlete you want to do amazing things,” Barnes said. “As a big-wave surfer, I want to push the limit and catch the biggest and craziest waves in the world. I always want more.”

As is his habit, Barnes was ready to jet anywhere around the world at a moment’s notice to catch the next big surf opportunity. In London, he had his wetsuits and inflation vest ready to go. Inflation vests are equipped with a CO2 container to rapidly inflate and carry a surfer to the surface in the event of a catastrophic wipeout.

Before October, Barnes had only surfed Nazaré one other time. But he was well acquainted with the spot’s potential for behemoth waves. The unique topography of an underwater canyon off the Portuguese coastline at Nazaré produces the biggest surfable waves on earth, sometimes nearing 90 feet in height. In January 2013, American big-wave surfer Garrett McNamara surfed what was considered to be a 100-foot wave off the coast of Nazaré, setting a new world record.

“McNamara founded big-wave surfing, and he’s got Nazaré wired,” Barnes said, adding that McNamara, now 53, has become something of a mentor to him. So when word came of last week’s massive swell bombing across the northern Atlantic en route to Portugal, Barnes immediately called his mentor. The American big-wave veteran had all the watercraft and other equipment already in place in Portugal, ready to go.

“He told me to get over here, and he took me under his wing,” Barnes said. “He had the equipment all set up. That was the only reason I was even able to get in the water. I’m super grateful.”

All Barnes had to do was show up and find a place to stay. Normally, no big deal. This year, however, thanks to the COVID-19 pandemic, getting to Portugal wasn’t the cinch it might otherwise have been. The European Union remains virtually closed to tourists as countries across the continent reimpose national lockdowns to stem a resurgence of the novel coronavirus.

By the letter of the law, Portugal wasn’t going to let anyone in. In any case, Barnes did what the rest of the big-wave surfing set did last week — he said “screw it” and hopped on a plane, hoping for the best.

“There was no guarantee we’d get into the country. But we just sort of rushed the border, hoping it would all work out,” he said.

When Barnes arrived in Portugal he had his inflation vest propped over his shoulder as he waited in line at passport control. The immigration officer waved him up to the counter, took one look at the young American, and simply asked: “Nazaré?”

Barnes said yes, and the immigration officer waved him through without question.

“Everyone got in smoothly,” Barnes said, explaining that other big-wave surfers had similarly successful experiences getting into Portugal last week. “Surfing is huge there and respected throughout the country. They definitely made exceptions for us.”

Many of the world’s foremost big-wave luminaries were on hand in Portugal last week for the historic waves. In addition to McNamara, the list included: Nic Von Rupp, Sebastian Steudtner, Andrew Cotton, Maya Gabeira, and the 18-year-old Portuguese phenom Tony Laureano.

“It was a giant puzzle and it all came together,” Barnes said. “There were a lot of moving pieces, and I still have a ton of things that I’ve borrowed from other people. In fact, I still gotta figure out where all this stuff goes.”

Last week’s epic waves weren’t confined to Portugal. Spain, too, saw huge peaks. And in Ireland — where another national COVID-19 lockdown has just gone into effect — a local surfer named Conor Maguire rode what many are calling the biggest wave ever surfed in the Emerald Isle.

Speaking to Magic Seaweed’s Jason Lock after his epic ride on Thursday, Oct. 29, Maguire said: “Yeah, originally when I saw the swell on the charts, I was like, ‘Oh fuck, of course it would happen during lockdown. So typical.’”

Waves at Nazaré reportedly reached nearly 100 feet in height on the same day, putting it in world-record territory.

“Looking back at 40-plus years of data, a swell of this magnitude happens roughly every two and a half years — this could be one of the largest October swells on record,” said Kevin Wallis, chief forecaster for the surf report website Surfline.

Once in Portugal, Barnes linked up with McNamara and prepped for the epic few days that lay ahead. Big-wave surfing demands high levels of physical conditioning, expert technical skills, and a degree of mental focus akin to that of a fighter pilot.

One unexpected upside of the pandemic was that, by reducing the amount of traveling he typically does, Barnes was able to concentrate on his physical conditioning in the summer and fall. His daily regimen was grueling, with lots of CrossFit-style metabolic conditioning such as doing assault bike intervals in a sauna. He’s also known to carry stones underwater, an exercise known as “rock running,” to build up his breath-holding abilities.

Ultimately, Barnes’ unmerciful lockdown training regimen gave him the added edge he needed when facing the biggest waves of his life.

“I’ve been training harder than ever,” Barnes said. “The pandemic helped get me in the best shape of my life. I’m 100% more confident — the strongest I’ve ever been, mentally and physically.”

The pandemic had another unexpected upside. The smaller crowd on the water meant Barnes would have more goes at the steadily incoming sets of liquid mountains. Yet the crowds were enormous on the cliffs above the shoreline.

Apparently, Barnes mused, after months of suppressed living under successive lockdowns, that day’s historic spectacle had a unifying effect on the people who were there to witness it, spurring them to momentarily forget the troubled times in which we live.

“It was very special,” Barnes said. “I could see thousands of people on the cliff, like there wasn’t a pandemic at all. People just forgot about everything.”

McNamara, the legendary American surfer, started up a WaveRunner for Barnes. The first few paces were good, then Barnes took a near disastrous wipeout.

“I really got my bell rung,” he said. He shook it off. “I was confident enough, and I wanted another one really badly.”

Then, on the horizon, a liquid Everest emerged. Like two fighter pilots operating their war machines in tandem thanks to thousands of hours of training, McNamara set off toward the set with Barnes in tow. The big-wave veteran put his protégé into the perfect spot, and Barnes released the towrope. He felt the surge of the atomic-bomb power of the epic swell under his feet. It was unlike anything he’d ever ridden before: the speed, the bumps, the size — the power. His whole life had led to that moment. He lifted up with the water, up, up, up, seven stories over the ocean, from a distance just a tiny speck of flesh and blood in a giant angry sea.

“It was the most unforgettable moment of my life,” Barnes said, and laughed. “But I can’t remember any of it.” Surfers call this the flow state. It’s the rare ability, honed by thousands of iterations of practice designed to let instinct take over, not intellect. Flow state, on a board, in big water, may be the ultimate embodiment of the Eastern ideal of “mind of no mind.” For Barnes, there was only ocean.

“It was a state of blacking out. You’re really not aware of anything that’s going on around you,” Barnes said of his epic ride. “I didn’t know how big it was until I saw the photo.”

Experts will have to analyze the photos to estimate, as best they can, how big the wave really was. Yet, just one day later, while he was still in the emotional roil and tumble of the moment, Barnes’ voice seemed, even through the intermediary of a cellphone speaker, to waver a bit. As if he still couldn’t quite comprehend, or believe, the enormity of the experience he’d just lived.

And although he might have “blacked out” during the moment, the ride’s emotional aftereffect was the best experience of the young man’s life so far.

“It was the biggest wave of my life, and it was even more special that I was there with my friends to celebrate,” Barnes told Free Range American from Portugal. “It was a full team effort. Sure, I was the surfer on the wave, but I’m just the lucky one.” 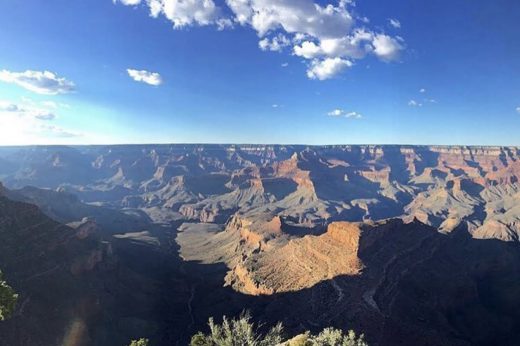 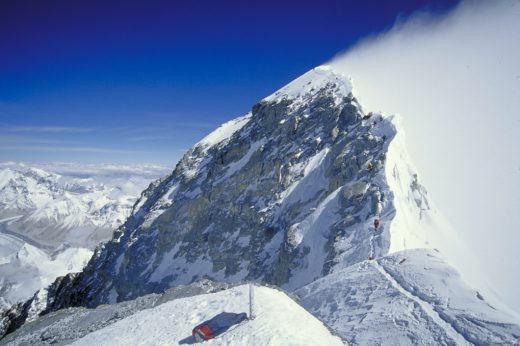 China To Draw COVID Line at Summit of Mount Everest 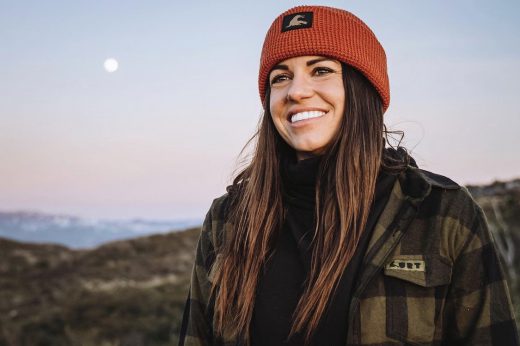 Things Worse Than Death: Why Laura Zerra Chooses a Life of Adventure 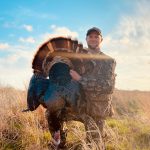