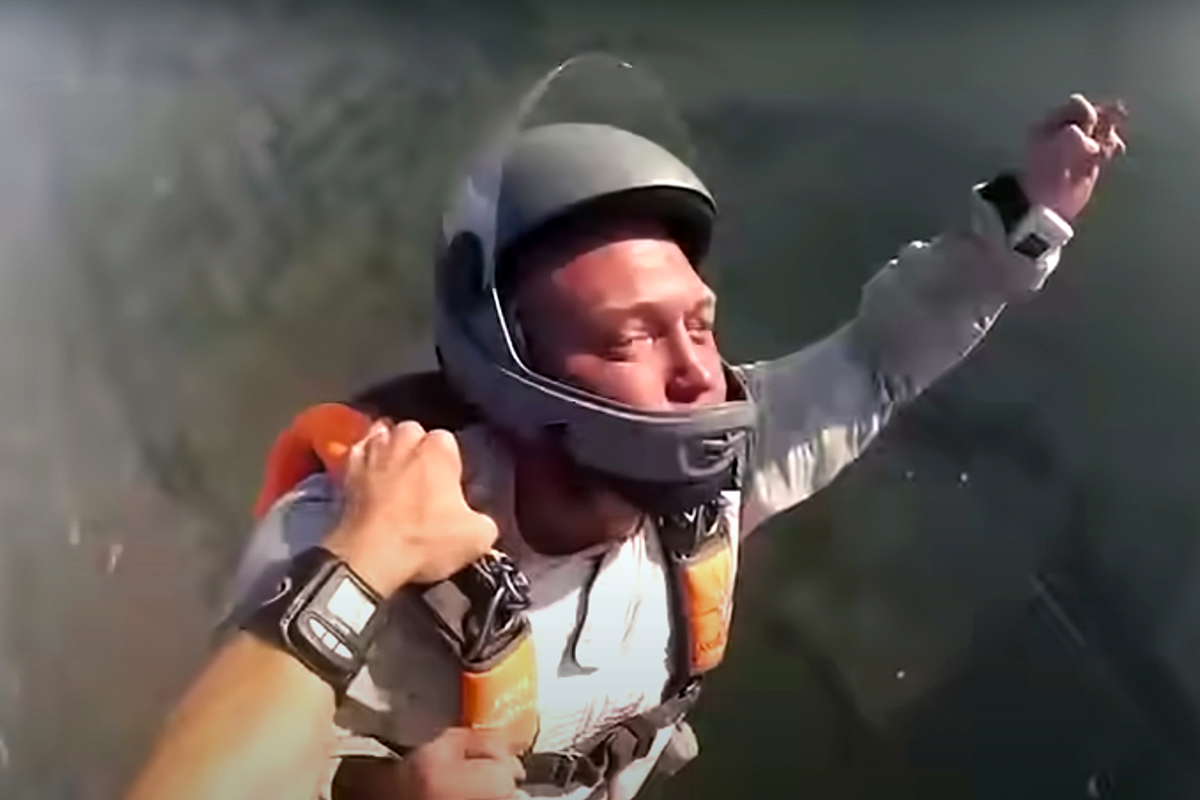 Remember that part in Point Break when Johnny Utah pulls the ripcord on Bodie’s parachute as they plummet toward the terra at terminal velocity? The video below shows something similar happening in real life, only it isn’t due to a display of daredevil bravado, it’s because the guy in question got knocked out cold when he collided with another skydiver.

The helmet-cam clip started making the rounds on social media last week. It’s some intense footage that’s actually more like the infamous HALO jump from Mission Impossible-Fallout (2018) than the final jump scene from Point Break, except this really happened, and it’s scary as hell.

The jump shown took place in Texas back in 2014, but the professional skydiver wearing the helmet camera that recorded the footage didn’t post it anywhere because the jumper involved said he didn’t want his family to see what kind of danger he’d been in.

In April of last year, the jumper, Ben Pigeon, decided it was time to share his experience and his video and posted it on his Facebook page. It made its way to YouTube, where it has racked up more than 1 million views to date. Seeing that Ben was now cool with it, the instructor, Andy Locke, a full-time skydiver who works at Skydive Arizona, recounted the experience from his point of view.

When it resurfaced on social media last week, the video had some incorrect titles implying Pigeon had passed out or fainted during his freefall (just like the title of the YT video), even though it’s pretty obvious he straight-up got knocked out when another skydiver smashed into him.

Locke says he was visiting Skydive Dallas to conduct an angle-and-tracking camp, which included 20 jumps over a weekend. The jump in the video was the 20th and final jump and the 10th of the otherwise uneventful day.

“It was down to me and three participants,” Locke said in a post on Pigeon’s FB page. “On this jump, they decided they wanted to do a dive flow that I had done earlier in the weekend. It’s a head-down drill drive that I have done more times than I can count. Basically, we exit head down, open up to a round, and drop grips. Then, I move away from the group and stop, so they can work on approaching a head-down group.

“The plan is to move, stop, move, stop. We would do that a few times until break-off. We walked this dive on the ground, everything from climb-out to break-off. I was very clear about the dive plan, and everyone seemed to understand.”

Unfortunately, even with good planning, shit still goes sideways sometimes, and Locke says he now wonders if fatigue hadn’t taken its toll on all of them that day.

“We should’ve stopped at nine jumps,” Locke says. “It was a hot Texas summer day, and I was wiped out. I’m a full-time skydiver that’s accustomed to jumping all day. If I’m tired, it’s safe to say that these jumpers were tired as well.”

The video begins with the jumpers still in the plane, and there’s some apparent confusion about the jump order and exit positions.

“That’s a good indication that they were tired,” Locke says. “The jumper that gets knocked out forgot to buckle his helmet. I’m embarrassed to say that I, as well as everyone else, failed to notice.”

Here’s Locke’s play-by-play of what happened after the group exited the plane:

“One jumper goes off level and bails to his sit. I stop. The other two jumpers approach and stop. Seeing how far away the outside jumper was, I decided not to move further away. I wanted him to make it back into the skydive.

“It was clear to me he was fixated on me and unaware of the other jumpers,” Locke says. “Once he recognized that he was doing a flyby, he flattens out to his back and picks up speed. He then goes into a fetal position and crashes [into] the head of another jumper.

“The jumper that was hit was fixated on me as well — he never saw the dude coming.”

As soon as Pigeon was hit and started spinning, Locke realized he was unconscious and flew into action.

“I immediately go to my back and start to drive at the jumper who was hit. He was in a flat spin on his back. The only thought I remember having was, ‘Get there.’

“I then transition to my belly and use all the surface area I could to fly over to him. I stop his spin and tried to roll him over on his belly to no avail. Apparently, rollovers are easier when [the person is] awake.

“At 5,000 feet, I make the decision to pull his reserve. My logic behind the decision of pulling his reserve rather than his main is that the reserve is designed to open and land more docile than a typical main parachute. If he fell all the way until his AAD fired, he would be under a reserve anyway, but with 4,000 less feet of altitude to regain consciousness. I then got down to the ground as fast as I could so that I could notify someone to call 911.”

An AAD is an automatic activation device, a mechanism that automatically opens a parachute at a preset altitude or after a preset amount of time elapses as a safety measure for situations like this one. In the US, all student jumpers are required to have an AAD, typically on their reserve chute. Modern AADs are electronic-pyrotechnic devices with built-in computers that use a small pyrotechnic charge to sever the reserve container closing loop, allowing the spring-loaded reserve pilot chute to deploy.

The FAA requires that “all tandem parachutes have an AAD installed on the reserve parachute. Industry associations, such as the USPA (United States Parachuting Association), require their affiliated skydiving schools and clubs to provide and/or require the use of an AAD for all student or unlicensed skydivers.”

Trevor Thompson, a former Navy SEAL and a veteran skydiver and BASE jumper, said Locke’s actions were unlike anything he’s seen.

“This is not something standard that somebody would do, to fly over and grab somebody,” Thompson said. “The AAD should fire, but [Locke] just took the safety of that other jumper into his hands. [What he] did saved the guy from any further issues by having his parachute open higher than it would have with the AAD.”

Pigeon says he doesn’t know how he managed that because he doesn’t remember the jump.

“I was so concussed that [I] lost three days of memory. How I found the drop zone is beyond me,” Pigeon writes in his post that originally accompanied the video. “I could have dropped into power lines or the highway. Not only did I find it, I flew a perfect student pattern, but did not have the strength to flare, meaning the landing hurt also.”

“I was so out of it when first asked if I was okay, I said, ‘What do you mean, I Just got out of my tent,’ and then pointed to my parachute,” Pigeon adds. “I am not saying Jesus took the toggles, but someone looked after me that day.”

Thompson said it was undoubtedly a unique solution to the problem, but that Locke kept his cool in a tense situation.

“I’ve never heard of anything specifically like this happening in the past,” Thompson said. “It’s an odd scenario but not fully crazy. Good on him for grabbing that person. It’s relatively good flying, as well as a display of level-headedness.”

Locke says he learned a few lessons from the incident that he’s glad he can now share.

“The jumper that flew into the head of the other guy was a tunnel instructor. He kicked ass all day. Nine jumps with no issues. When he wanted to do this 10th jump, I assumed he could handle it. I was wrong,” Locke says. “Tunnel is an excellent place to hone our skills, but it is no replacement for a skydive. I’m sharing this because we can all learn from it. As jumpers, we do our best at minimizing the risk, but we can never eliminate it. Everybody makes mistakes. The bigger mistake would be to not learn from those mistakes.

“Truth is, this accident could’ve happened to anyone [and it] changed the way I go about jumping for the better.”