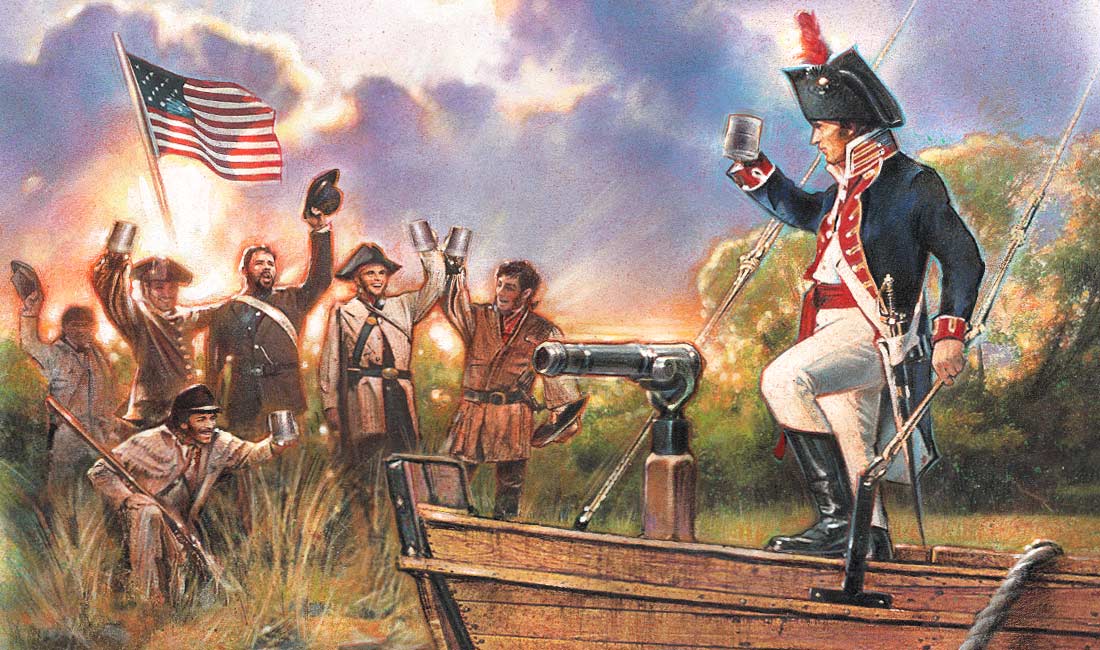 Isolated and far from home, the members of the Corps of Discovery celebrated the Fourth of July three times in the wilderness in 1804, 1805, and 1806. Led by Captain Meriwether Lewis and Lieutenant William Clark, the expedition left St. Louis in 1804, tasked by President Thomas Jefferson to find a practical land route to the Pacific Ocean. America was a young nation, filled with ambition after winning their independence from the British empire.

As they travelled west, the Corps of Discovery embodied the best and worst of America’s most valued traits, but their journey is ultimately remembered as one of the greatest adventures in American history.

Members of the Lewis and Clark Expedition ranged from Virginian aristocrats like Lewis; to French-Canadian coureurs such as George Drouillard, a fine navigator; to Private John Shields, the expedition’s blacksmith; to Sacagawea, the group’s pregnant Shoshone interpreter. There were only two non-volunteers on the trip. Sacajawea had no say, as she was both the prisoner and the wife of French trapper Charboneau. The same lack of personal agency went for York, William Clark’s slave.

But despite their disparate backgrounds and sometimes serious arguments, 39 men and one woman all travelled and camped together for the better part of three years. Only one member of the expedition died: Sergeant Charles Floyd in 1804. The Corps of Discovery achieved an incredible transcontinental traverse, twice. They navigated the Missouri River, crossed the Rockies, and canoed the legendary Dalles of the Columbia River. They cemented a legacy that still inspires Americans to this day.

Beside the Missouri River in 1804, the explorers became the first people to celebrate American independence west of the Mississippi River. Meriwether Lewis doubled the whiskey ration for the day and had the cannon fired in the evening. These Americans were making history, but still took time to remember and appreciate the newly minted United States of America.

In 1805, the expedition again found itself celebrating the Fourth of July along the banks of the Missouri, but this time in Montana as they were about to enter the daunting terrain of the Rockies. It was there that the members of the expedition finished their whiskey.

According to Lewis’ journal that night, “We gave the men a drink of sperets, it being the last of our stock…the fiddle was plyed and they danced very merrily… in short we had no just cause to covet the sumptuous feasts of our countrymen on this day.” Despite his creative spelling of “spirits” and “played,” Lewis enjoyed himself on July 4, 1805. While the challenge of traversing the Rockies loomed on the Western horizon, he and his people found time to relax under the trying circumstances.

Though they were far from home on the west side of the Appalachian Mountains, the explorers still celebrated the independence of their young nation.

The vanguard of an infant republic, Lewis, Clark, and their people headed west with a deep optimism. Though they left their countryman behind for three years, they hoped to make their nation a better — and bigger — place through their adventures. The Corps of Discovery was quintessentially American, and despite their flaws and disagreements, they always found a common cause for celebration on the Fourth of July.

This article was originally published July 3, 2019, on Coffee or Die.