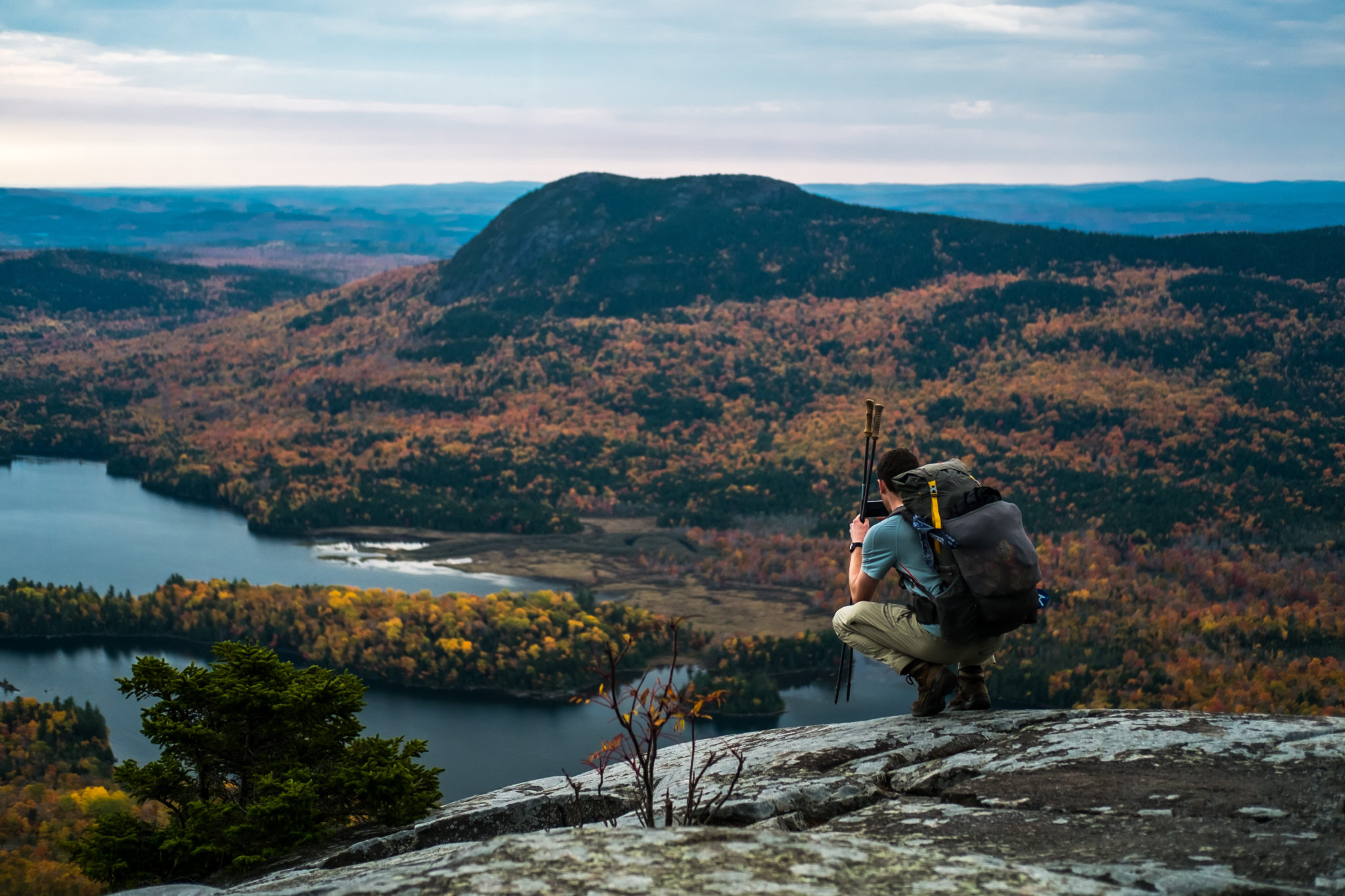 Sometimes a day hike or a weekend backpacking trip isn’t enough. If you’re feeling the call of the wild — that urge to be outside and survive in the elements for an extended period of time — you’ll want to consider long trails meant for thru-hikes.

A thru-hike is a long-distance backpacking trip that often takes up an entire season. They take a significant amount of advanced planning and preparation, but the journey is often memorable and rewarding.

These notable thru-hikes in North America belong on any backpacker’s bucket list.

It’s not possible to talk about American thru-hikes without mentioning the Appalachian Trail (AT). Completed in 1937, the AT runs 2,190 miles from Springer Mountain, Georgia, to Katahdin, Maine.

A typical thru-hiker starts at the south end in spring and heads north for the next four or five months. That said, section hiking — in which hikers traverse smaller sections of the trail piece by piece — is also a great choice for the AT. This is typically the most convenient way to hike this trail since it provides the most flexibility.

Because a hiker can pick and choose just about any route plan, the AT is a fantastic thru-hike for a beginner, though the trail is far from easy, especially in its northern sections. From the incredible balds of North Carolina to the dense woods of Maine, the AT is an amazing and accessible trek through the American East.

Traversing the entire length of Vermont, the Long Trail offers a challenging and rugged trip through some of the best terrain in New England. At 272 miles, the Long Trail isn’t actually all that long, but it is quite challenging.

The century-old trail actually travels alongside the AT for about 100 miles but then diverges toward Canada and into the deep wilderness. Here, the trail follows the Green Mountains, so expect some serious elevation change and wild weather.

The American West offers some of the best hiking in the world, and the Pacific Crest Trail (PCT) takes a backpacker from the brutal Mojave Desert to the daunting and gorgeous Sierras and Cascades. The PCT runs 2,668 miles from the Mexican border to the Canadian border.

As beautiful as the Appalachian Trail can be, the PCT is something special. The rocky ridgelines and clear alpine lakes of the Cascades in Washington or Sierras in California are classic vistas that have inspired people like John Muir and Ansel Adams. The PCT goes through some of the last truly wild land in the world.

But be aware of the weather. I backpacked a sliver of the PCT in the Cascades some years ago, and northern sections of the PCT can have serious snow cover even in June or July. And expect snow to start falling again by September! Because of the cold, most people start at the south end and head north to arrive in colder areas around August.

Section-hiking the PCT is possible but more difficult than on the AT. Because the PCT can go quite a long way without a good exit point, hikers have to commit to longer chunks of the trail.

But if trout fishing in Yosemite, traversing the Cascades, and enduring harsh weather seem like good summer activities, the PCT has your name on it.

Tucked away in the High Sierras, the John Muir Trail (JMT) is 211 miles of breathtaking landscapes and arduous hiking. The trail goes from unbeatable Yosemite and Sequoia national parks, through the Ansel Adams Wilderness, and finally to Mt. Whitney. The trail is challenging, and you can expect the trip to take a full month.

For most of its length, the JMT is on the same route as the PCT, which makes the JMT a solid choice for a backpacker who can’t do the full PCT. The Sierra Nevada Mountains often have good weather, too, but rain gear is recommended.

Winding its way under 14,000-foot peaks, the JMT presents stunning vistas that are worthy of a visit from anyone who loves outdoors photography.

If you’re in search of adventure, hike the John Muir Trail. It’s a gem of the American West that has rightfully earned its fame.

If the AT and the PCT seem too common and civilized, the infamous Continental Divide Trail (CDT) may be the challenge you’re looking for. Like the PCT, the CDT goes from Mexico to Canada, but the trail follows the Continental Divide. Because of that simple fact, the CDT traverses some of the roughest terrain in the Americas. Add to that the approximate 3,100-mile length, and this trail is brutal.

Wait, approximately 3,100 miles? Yes — the CDT has some major route variations, and it’s very common for thru-hikers to divert their routes to avoid forest fires or other dangerous conditions.

The trail doesn’t actually follow the ridgeline of the Continental Divide, but it sticks pretty close, and thru-hikers experience the brutal New Mexico desert, the spectacular Wind River Mountains of Wyoming, and the one-of-a-kind grandeur of Glacier National Park.

The CDT is exceptionally challenging, and I’ve actually never met a hiker who finished it, though those people do exist! I hiked a small part of it during a trip in the Wind River Mountains, and the scenery is some of the most beautiful — as well as the most treacherous — I’ve ever encountered. 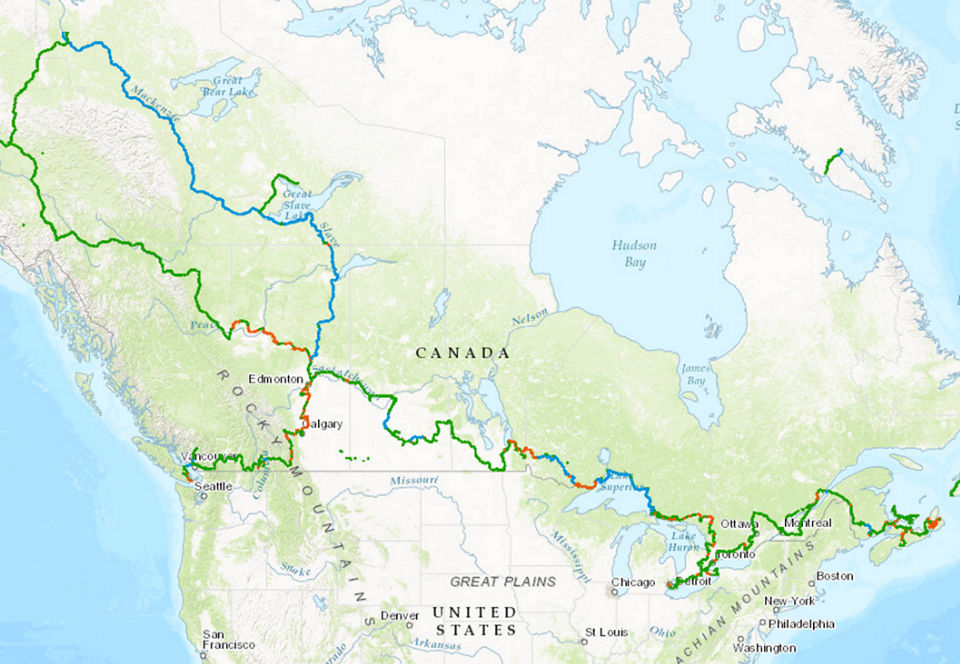 For the super-adventurers out there, the Trans-Canada Trail — also called The Great Trail — does exactly what its name implies: It crosses Canada, twice. One route takes you by land and water from Newfoundland to the Pacific Ocean. Another route runs north-south from Alberta to the Arctic Ocean.

The entire Trans-Canada Trail runs 24,000 kilometers, or almost 15,000 miles. You can hike, bike, run, ski, or paddle your way along this epic trail, though most thru-hikers use some combination. The best sections have to be the Canadian Rockies, the vast northern wilderness in the Yukon and Northwest Territories, and the wilds of Newfoundland and Quebec.

This is not a trail you’ll ever do in one hiking season, so set aside some serious time and energy for this trek.

One of America’s finest — and shorter — thru-hikes, the Tahoe Rim Trail loops around America’s largest alpine lake. The views are fantastic, and the hiking is more of a relaxed walk through the woods than a strenuous adventure like the CDT.

This 165-mile trail technically starts just outside Tahoe City, Nevada, but a thru-hiker can start at any trailhead since it’s a loop. The Tahoe Rim Trail is one of the more accessible thru-hikes, and people of varying skill levels can find something to enjoy.

Even better, the hike is short enough to do in one or two supply runs, so the somewhat complex resupply situation of the longer trails can be avoided.

If you want something beyond a foot-hiking experience, try this trail in winter on skis or snowshoes. Just make sure you’re ready for some serious cold.

There are risks to consider in thru-hiking that day-hiking and even standard backpacking avoid. Longer hikes entail major logistical concerns. The PCT and CDT have long desert sections, so water becomes a critical resource.

And then there’s conditioning. Don’t be like Bill Bryson, author of the wonderful book “A Walk in the Woods.” He and a friend started the AT without any preparation, mental or physical. It made for a good story, but it was a bad plan. Get in shape, test out your gear well in advance, go prepared, and, ideally, don’t go alone.

Don’t forget to pay attention to the weather, either! It can snow any day of the year in the Rockies, Sierras, Cascades, or parts of Appalachia. Even if you’re tackling one of these trails in the summer, as most do, you need to be ready for some real cold — and some real heat. Because weather.

We haven’t even touched on bugs or bears, two other major considerations on these adventures. Both topics deserve separate and detailed discussions.

But if you take the right precautions and make the right preparations, almost anyone can get into thru-hiking if they have the time. And above all the other factors, time is often the most difficult one. It’s hard to get three weeks off work, school, or just life — let alone three months.

Section hiking is a great way to satisfy the need to connect with nature when time is of the essence. And there’s nothing wrong with doing these routes bit by bit — the most important part of hiking is actually doing it.

This article was originally published April 29, 2019, on Coffee or Die.