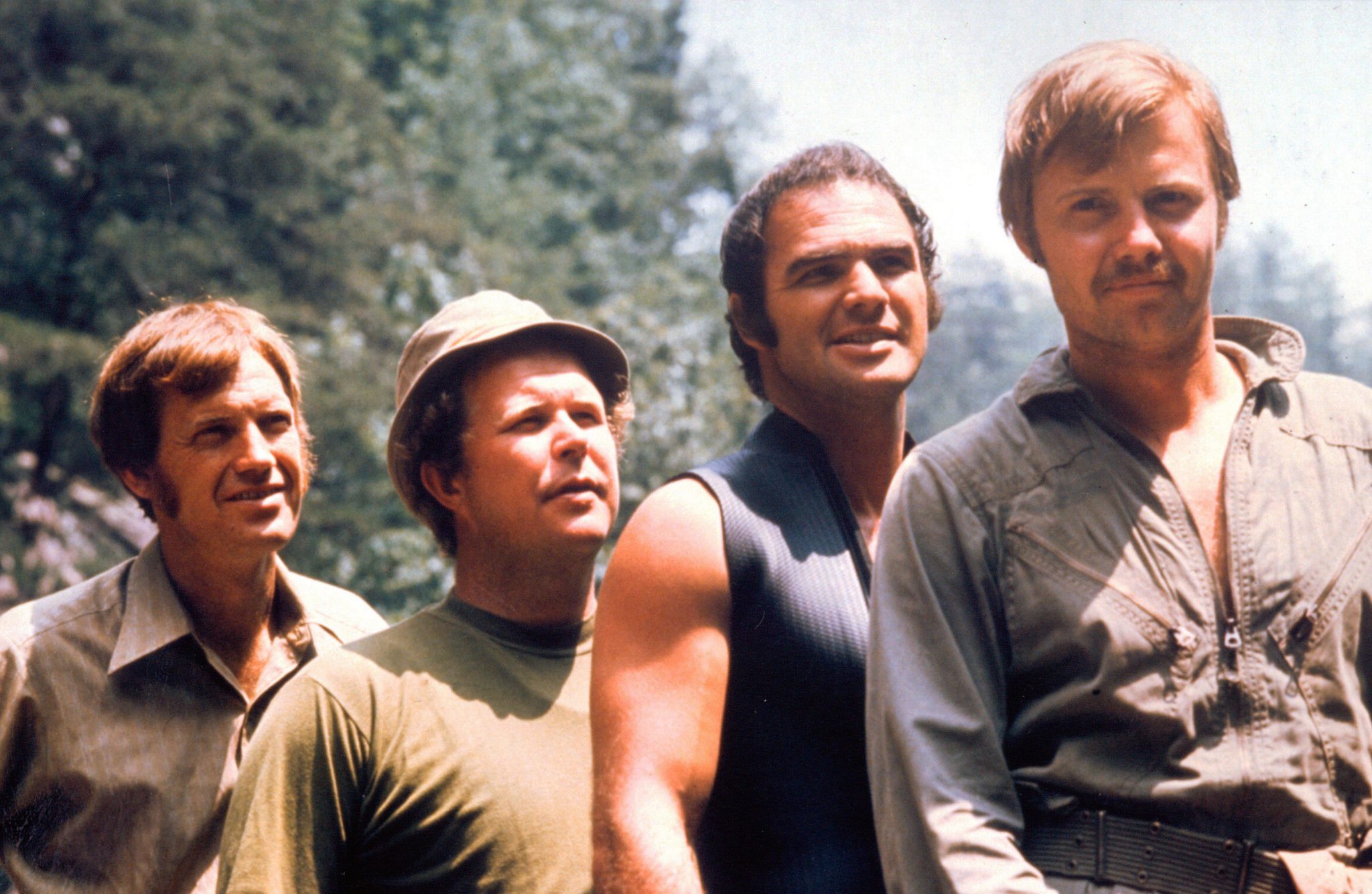 The thing about taking a river trip is that it’s kind of a one-way affair, and once you’re committed, you have to just take the ride or hike out. Most river adventures in movies go bad when a group either accidentally navigates into unexpected rapids or is guided there by someone with bad intentions. Others are just doomed from the start. These are some of the best — meaning worst — river misadventure movies of all time.

The plot of this one is … a little thin: A bottom-rung school sends its four shittiest students to win an intercollegiate rafting race, which will bring the institution a measure of respect, apparently. So, the group of mid-30s alcoholic super-super-seniors hits the road with their awesome dog, Chuck, and hijinks ensue. The race itself is shockingly violent. The douchebag jock team has blades in its paddles, a mini crossbow with explosive arrows, and an actual torpedo to destroy its opponents’ rafts. They use this stuff during the race, and it could totally kill the other teams if they didn’t jump into the river. Also, the insane ROTC team also has explosives, because, IDK, coke in the ’80s was really strong?

Adventure Advice: Apparently, a dog is a really useful thing to have on a river trip, so you know, bring one along. And, apparently, lots of explosives?

In this attempted reboot of the National Lampoon’s Vacation movies, a grown-up Rusty Griswold (Helms) takes his family on a road-trip vacation, determined to do it better than his father did. He doesn’t. While this isn’t exactly a classic, it has its moments, and one of the better ones is when a deranged and deeply heartbroken rafting guide (Charlie Day) takes the family along on an actual suicide run through some gnarly rapids after his fiancée dumps him. The whole sequence is done in super slow motion as Harry Nilsson’s “Without You” blares over it. It’s kind of perfect. The Griswolds jump out just ahead of a huge waterfall and cling to rocks and logs while the guide heads to the great hereafter alone. His body hits rocks as he falls, screaming. Kinda dark for a Vacation movie.

Adventure Advice: When your spouse says “I don’t know about this” and you’re a Griswold, or Griswold adjacent, reassess everything.

In this early HBO original movie, Dan Cutler (Alda) is an unrepentant asshole who runs an ad agency. He forces his management team of veteran character actors to go on a fishing-trip retreat in Washington’s Lava Canyon. The “retreat” turns out to be an intense whitewater rafting trip. Cutler wants to test his employees’ loyalty and ignores the guide’s advice by packing the whole group into one heavy raft. Why? So they don’t have to ride with strangers. Shocker: The raft flips after hitting a huge rock. Two executives are killed, along with a retiree and two clients along for the ride. Cutler survives to prove what a colossal dick he is by trying to weasel his way out of responsibility in court while remaining really confused as to why everyone is so upset about a rafting trip that killed five fucking people.

Adventure Advice: When the guy organizing your company retreat has all the earmarks of being a sociopath and starts overruling the guide, double-check the fine print on the waiver you signed.

This classic monster movie kicks off on an isolated tributary of the Amazon River, where archeologist Dr. Carl Maia (Moreno) unearths a mysterious and ancient fossilized webbed hand. After Maia secures funding for a proper expedition and recruits a few young scientists, they all head down the tributary aboard an extremely cool old steamer ship. The search for more fossils leads the group to the titular lagoon, where they find a member of the Gill-Man species very much alive, kicking, and pissed off about his unwelcome visitors. He’s also really, really interested in the only woman aboard, Kay Lawrence (Adams), and wants to whisk her away to his Gill-Man cave. I always felt his fishy intentions were less than pure.

Adventure Advice: If you’re ever journeying to a mysterious lagoon in the Amazon, bring plenty of guns. They work well on most things that wish to do you harm, including Gill-Men, it turns out.

Alan (Astin), an indignant nerd and city kid, is sent by his parents on a multiweek summer camping adventure in the mountains with three older kids and their strangely intense guide, Vic (Bacon). Tensions rise when Alan begins to defy Vic, who responds by just leaving him behind in different places — on an island all night in a lightning storm, hanging by a rope from a cliff — you know, to build character and stuff. When Vic’s tibia snaps and is poking out of his leg after a bad “fall,” Alan uses his big brain to rig up a way to drag Vic back up the cliff before paddling him through rapids in a canoe to a ranger station before he bleeds to death. But it’s all set to a super upbeat soundtrack of anonymous ’80s music!

Adventure Advice: When your river guide gets weirdly aggressive, just beat him with a paddle and throw giant rocks at his head until he falls off a cliff. It’s the only solution, and totally not attempted murder.

This one is based on the real-life story of an Israeli adventurer, Yossi Ghinsberg, and his disastrous 1981 trip into the Amazon rainforest. In the movie, Ghinsberg (Radcliffe) meets up with two buddies. The trio hooks up with a shady Austrian guy, who convinces Yossi it would be a good idea to hike into the jungle and find an indigenous tribe that he swears he’s friends with. Yeah, that’s one big giant red flag. They hike for several days and actually find a village, but Marcus (Jackson) gets bad sores on his feet and can’t walk. That’s all it takes for the group to fracture. The four men decide to build a raft and head down the river. They barely make it through some rapids, which starts another argument. Two of the men head off into the jungle determined to hike their way out, while Yossi and Kevin (Russell) continue on the raft. More rapids destroy their improvised river vessel. Yossi is carried away. He then must survive in the jungle with literally nothing. In the end, Kevin is rescued first and is on the boat that finds Yossi. The two men who got off the raft were never seen again.

Adventure Advice: There are a few places you shouldn’t go without knowing exactly what you’re doing. The jungle is one of them.

Kevin Bacon just has a thing for being an asshole on the river. He and a young John C. Reilly play a pair of robbers hiding out after a job by floating the Salmon River in Idaho, where Gail (Streep) used to be a rafting guide as a teen. She and her vacationing family run into the outlaws, who appear friendly and harmless — until they take the family hostage. The two bad guys want Gail to guide them through a treacherous stretch of rapids, known as The Gauntlet, so they can make their getaway. This is actually a really cool adventure movie with an absolutely average hero dad who rises to the occasion when necessary, and Bacon’s Wade is a delightfully tremendous asshole. Plus, there’s a good bit with a hero dog, and there are some great rafting scenes that will shrivel your sack if you have one.

Adventure Advice: Hiding out after a robbery by casually rafting on a river is a pretty good idea. Relying on safely navigating Class 5+ rapids that kill most people who give it a go is not.

Heading up a mostly uncharted river in Cambodia during the Vietnam War on a secret mission to assassinate an American special forces colonel who has gone insane and created a death cult deep in the jungle sounds like a bad time from the word go. And it super is. Only two of the crew make it to Col. Kurtz’s (Brando) camp with Capt. Willard (Sheen), and only one survives the movie, but Lance is so spaced out it’s doubtful he goes back to volleyball and surfing anytime soon. Coppola and Sheen famously almost didn’t survive the filming of this river movie. When you’re over two hours into the seemingly endless Redux version, you might feel like you won’t make it either.

Adventure Advice: If you never get out of the boat, you can’t get eaten by a tiger. “I didn’t come here for this! I don’t fuckin’ need it, I don’t want it! […] All I wanted to do was fuckin’ cook! I just wanted to learn to fuckin’ cook, man!”

Again, floating a river to lie low sounds like a good idea, but if you’re found out, you’re kind of cornered. Sam Bowden’s (Nolte) ex-client Max Cady (De Niro) is a murderer and convicted rapist who blames Bowden for his prison stint and proceeds to stalk Bowden’s family after his release. When a private detective is murdered in the Bowden living room, Sam flees with his wife and teenage daughter to hide out on their houseboat while cruising the Cape Fear river. But, “DUN-DUN!” Cady was strapped to the bottom of their SUV the whole time and is right there on the river with them. Only a bottle of Ronsonol and a fast-moving storm save the family from a likely terrible fate at Cady’s hands.

Adventure Advice: When being stalked by a deranged lunatic, always have an exit strategy. And get one of those mirrors with a long handle to check under your car, because that shit is creepy as hell.

This just had to be on the list, and if it had to be on the list, it had to be No. 1. This is one of the great movie setups of all time. Four businessmen and friends from Atlanta decide to have a little adventure by canoeing a stretch of a river in Nowhere, Georgia, that runs through a valley set to be flooded by dam construction. There’s the experienced outdoorsman and asshat, Lewis (Reynolds), his close buddy Ed (Voight), who is also an outdoorsman but not such an asshat, plus city boys Bobby (Beatty) and Drew (Cox). They travel downriver paired up in two canoes, having no idea they’re headed for a scarring ordeal full of homicide and nonconsensual butt stuff.

The two canoes get separated, and Ed and Bobby find themselves captured by a pair of shotgun-wielding rapists. Lewis kills one with his bow after Bobby is violated, and the foursome escapes. But when they go through a dangerous set of rapids, Drew is shot and killed from the cliffs above. The canoe flips in the rapids and Lewis breaks his femur. For the survivors, the trip is now about making it out alive with a badly injured comrade, while also avoiding the remaining armed, murderous man rapist in the mountains.