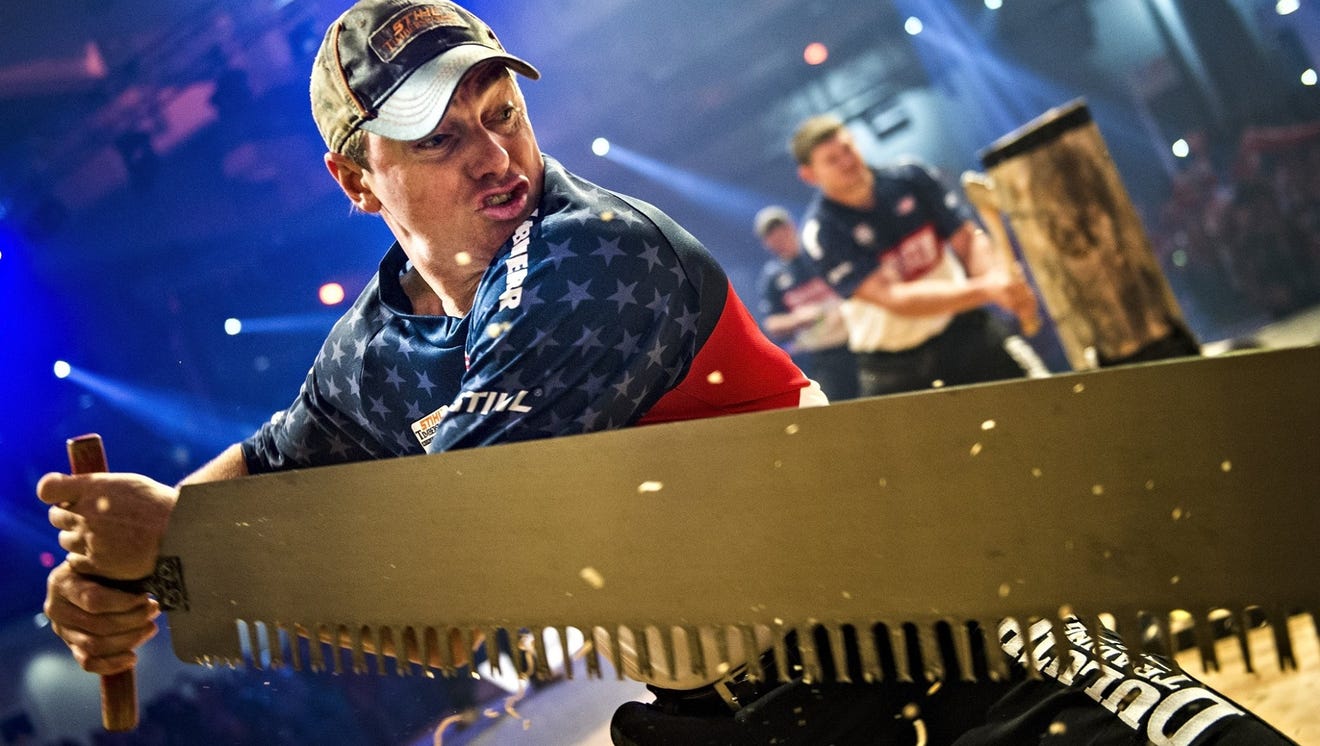 Dave Jewett does not have a blue ox that follows him around, but he’s as much a giant in the Timbersports world as Paul Bunyan is in American folklore.

What started as a sure, why not? moment when he joined a junior-college woodsmen team in 1987 has turned into a professional career as a decorated competitive lumberjack athlete, coach, and commentator that is still going strong.

For the uninitiated, Timbersports is a head-to-head lumberjack competition, using chain saws, axes, and crosscut saws in events like the hot saw, single buck, springboard chop, standing block chop, stock saw, and underhand chop. There are currently national championships in 27 countries, and the best performers advance to the world championships. Timbersports events are as physically intense as any CrossFit competition but involve scalpel-sharp shit that can kill you.

We caught up Jewett and talked with the world-record-holding world champion about his rookie success, tangling with Aussies, 300 cc chain saws, and losing toes.

FRA: How did you get started in Timbersports?

DJ: I was studying horticulture at Finger Lakes Community College and decided to join the woodsmen team. I was there for a couple semesters and I just excelled at it. I could just do it really well. After college, the coach, Marty Dodge, told me of all the students he’s ever had, he thought I should give a shot at going pro. So I started hitting small tournaments and eventually went from there to hitting bigger tournaments. I wound up being able to go to the world championships as a rookie.

So I did the semipro events, which is all they’ll let you in at that caliber. I ended up breaking the professional world record in the single-buck one-man crosscut competing in the rookie division. That propelled me into the pro ranks. So I bought a ticket and started spending my winters in Australia and New Zealand continuing to train down there in the hardwood.

FRA: What sort of training did you do? Did you have a specific regimen?

DJ: I play a lot of soccer, I’m in a couple of men’s soccer leagues. I also have a training arena that I set up identical to a competition arena. I get logs and set the logs up and chop them and work on technique. I’m always working on my timing, but I don’t go full speed. When I go into a competition, I go full speed. I’ll do all of the events, you know, anywhere from six to 10 events that would be in a competition. I just work on my swing and accuracy and make sure my equipment is set. But the main goal is to hit as many tournaments as I can. That’s really where I get the training and really get the experience is at the tournaments. The best competitors will hit 30 tournaments a year.

FRA: What did competition in the professional world look like then compared to now?

DJ: It was just as tough back then — it was just there weren’t as many competitors. When I started there was maybe a half-dozen very good professional US competitors. But as the Stihl Series, the Timbersports Series, was just gaining momentum, we allowed anyone to compete. So the Aussies and New Zealanders would come over, and the Canadians. I quickly went from tangling with a handful of really good Americans to everyone in the world coming over because the prize money was so good in the US.

FRA: How many events do you compete in at any given tournament?

DJ: As many as they offer. Some tournaments, I’ll do seven events, and some big tournaments, like the one up in Boonville, New York, that’s got 10 events, and I’ll do all 10 of them. I’ll have three or four chopping events, three or four sawing events, and then there’ll be like an axe throw. But my specialty is the sawing, the crosscut sawing. So I’ll do the one-man crosscut, the two-man crosscut with my partner, who lives up in Quebec. And then the Jack-and-Jill events. My Jill partner, she lives in Illinois. Those are sort of my dominant events.

FRA: Do you hold any records?

DJ: Over my career, I’ve broken over 35 world records, and probably a half-dozen still stand. But you know, they get broken. I break them and then somebody else breaks them by a thousandth of a second. That’s the way it is. I’ve got some records that I know will never be broken though. They’re just too fast.

FRA: Who are the hotshots in the sport now?

DJ: The men’s side has been pretty much dominated by Matt Cogar out of West Virginia. He’s from a big family of wood choppers. The ladies’ has really been dominated by two women: Erin LaVoie out of Spokane and Martha King from Chadds Ford, Pennsylvania. Nancy Zalewski was the top woman for years. She’s probably No. 3 right now. She’s actually at my house, just flew in from Wisconsin to train. She’s like me, 52 years old and trying to tangle with women in their early 30s.

FRA: Any too-close-for-comfort, holy-shit-I-could’ve-died moments in competition or practice?

DJ: I’ve been pretty lucky. I mean, any second you could die. Especially with these hot saws that we run. We’re running these 330 cc engines with 200 mile-an-hour chain speed. I blew a chain once off a hot saw at 200 miles an hour and it blew a hole through the half-inch steel mesh protective barrier. We’re working with equipment that is sharper than any surgeon’s scalpel.

I’ve seen guys get hit in the face with an axe. I’ve got plenty of stitches in my legs. I don’t know, 40 or 50 stitches in my legs, which is not much for a competitor. One went to the bone on my right leg into the knee, but that wasn’t too bad. We just stitched it up. Competitors cut their calves wide open right down to the bone. And toes. I’ve seen toes cut off. Guys die of heart attacks at the tournaments. Three of my friends died at tournaments from heart attacks. Get done sawing and hit the deck.

When I started nobody wore any equipment on their toes, on their feet, or shins. In the pros, you might as well have been barefoot. But now you’re required to wear a chain mail sock that covers the foot and shin. That’s saved a lot of trips to the emergency room.

FRA: What else keeps you busy now?

DJ: I do a lot of coaching. Before COVID hit I was being sent to Europe almost every year to coach. I also started doing commentary for ESPN about 17 years ago for the college series that ESPN filmed. Now it’s a televised series on CBS and I’m the full-time color commentator for CBS Sports, for Stihl Timbersports. As I get older, it’s sort of a pathway to stay in the sport. I just don’t have to show up with 20,000 bucks’ worth of equipment anymore.