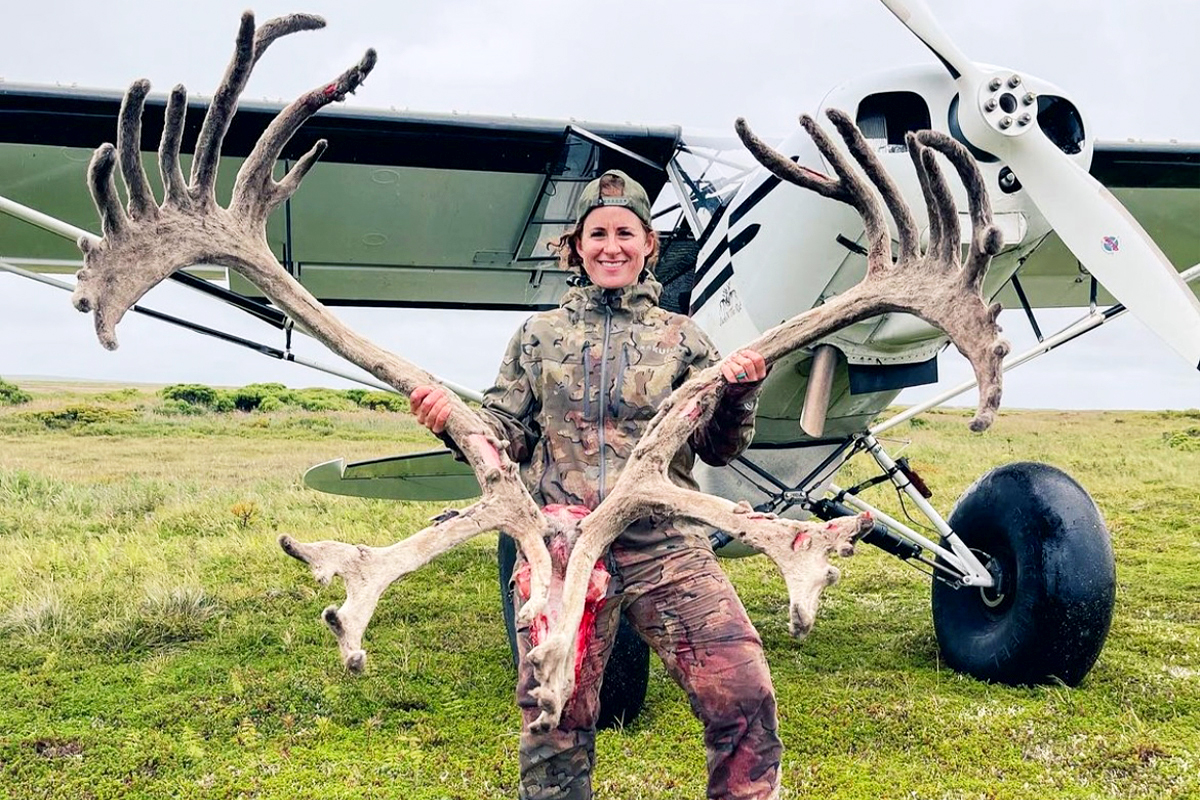 It’s said that when you get thrown by a horse, the only way to get past the fear of being thrown again is to get back on that same damn horse. But what do you do to get over fear after a bear has attacked you on a hunt in the Alaskan wilderness?

If you’re Tana Grenda, you go back to the damn wilderness four months later on your first solo fly-in hunt and shoot the largest caribou of your life — and possibly the biggest caribou ever.

The level of confidence, wilderness intelligence, and mental and physical stamina required to tackle a solo trip into the sprawling wilds of Alaska under normal circumstances (normal being a totally subjective term) is something possessed by only a handful of hearty souls.

A hearty soul is something Grenda certainly possesses. Leading up to this hunt, it had to wrestle with the specter of a massive 10-foot-tall grizzly that nearly killed her and her brother, Trevor Schneider, while they were hunting just a few weeks earlier, trying to fill his bear tag.

The charging bear took three well-placed rounds of .338 Rem Ultra Mag at 470 yards and kept coming through three more rounds from Schneider’s .454 Casull revolver after his rifle jammed. A fourth round from the revolver finally did the bear in — at a distance of just five yards. Well, Trevor filled his tag.

“That fourth [revolver] shot hit him, and you could tell he was hurt,” Grenda said. “He was one lunge from my face, and he turned.”

It takes a special kind of badass to set out on a solo hunting trip so soon after an experience like that.

“This was the first hunt that I’ve been back out, and I did it solo. [It was] my first solo hunt in Alaska, period,” said Grenda in an interview. “I never thought I’d go out solo. I usually always have at least one person with me. My husband said, ‘You can do it!’ I’ve never been scared before, but I [was] a little scared.”

And what an incredible hunt it turned out to be. Free Range American will bring you more on this remarkable hunter and her bear survival story soon, but for now, let’s focus on her record-breaking caribou.

There’s really no better way to hear the tale than directly from the hunter herself, as she wrote it in an Instagram post:

“He was a lone caribou and the only caribou for several miles. I had no idea how big he actually was.⁣⁣ It took me a while to spot him the next morning as he was feeding away from me all night. After hiking from ridge to ridge, I finally spotted him 800 yards away from me, feeding. ⁣⁣

“I wrapped all the way around him to get good wind, and [I] belly crawled into 37 yards in the wide-open tundra as he bedded. I was so close with my bow but had no ethical shot with just his high neck exposed quartering to me. ⁣⁣

“I waited 20 minutes for him to stand up or give me a lethal shot when [the] 20 mph crosswind shifted to him during a gust, and he caught a whiff of me. I knew it was all over when he snorted, so I drew back as he jumped out of his bed, but he was out to 100 yards within seconds. ⁣⁣

“He now had me pinned and circled and took off running toward my gear and gun, which were sitting 500 yards behind me. (I left the gun behind because I was determined to kill him with a bow. Instant regret).⁣⁣

“I ran behind him for this long sprint, hitting the ground every time he looked back for me. ⁣⁣

“I finally made it to my gun. He was running a big circle around me at 350-400 yards. It was rainy, misty, and in a grassy, flat swamp which makes it tough to get a range or set up prone. ⁣⁣

“At the peak of this cluster, I was trying to use the video camera, range, dial, get a rest, make him stop. I knew I only had one last chance before he was gone forever, and I took him down at a 350-yard trot.”⁣⁣

Grenda didn’t realize just how big he was until she walked up on the animal. Then she called in some air support.

Her husband, Adam, is a pilot, and he found a strip of land just big enough to land his Super Cub and help Grenda pack out her bull.

“Adam has a flying skillset unlike anything I’ve ever seen,” she wrote. “He consistently puts airplanes where airplanes are not meant to go and puts me in seemingly inaccessible places.”

Grenda is no stranger to the Boone & Crockett Club record books. She has three caribou to her name that are over the club’s 400-inch minimum score.

Her most recent kill is not only above the 400-inch minimum, but it could potentially unseat the current B&C world record for Barren Ground Caribou held by Daniel Dobbs and his 477-inch giant taken near Iliamna Lake, Alaska, in 1999.

Since the antlers on Grenda’s bull were still in velvet (a soft fuzzy layer that carries nutrients to the antlers during their growth period), she and Adam were conservative with their measurements.

“I’m not sure how you compensate for velvet, to be honest,” she said. “We scored it with velvet, and then we […] took like 14 inches off for velvet. He’s anywhere between 460 to low 470s. The main thing with him is that he doesn’t have a double shovel, and that’s where you get a ton of score.”

World record caribou or not, Grenda is just happy to have filled her tag, and whatever the rack measures out to be, her bull is an amazing achievement.

“I really just wanted a meat bull and to fill my tag before moose season comes up,” she said. “His measurements all match up to the world record; some are even bigger. He’s got all of it. I mean, I don’t really care. He’s just a cool caribou.”

Read Next: Laura Zerra – Survivalist and Social Media Influencer – Is Not Afraid