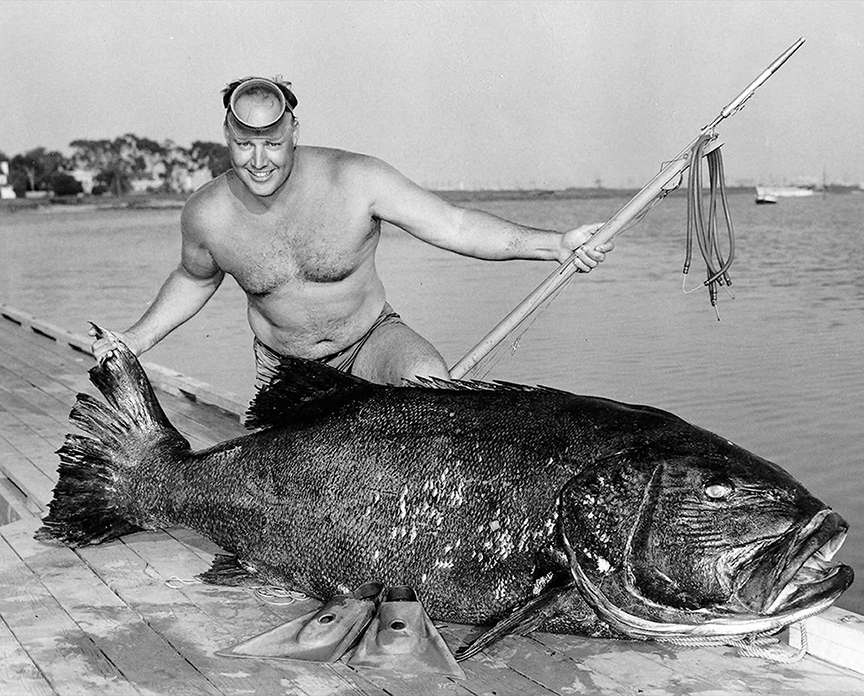 All 19 members of the San Diego Bottom Scratchers are dead. At the bottom of the ocean, a few hundred yards northwest of Boomer Beach and the Point in La Jolla, is an underground cemetery of tombstones and rock cairns. Inscribed are the names of some of the members from the first organized dive club in the world.

Jack “Walrus” Prodanovich formed the Bottom Scratchers in 1933 with his two friends Ben “Porpoise” Stone and Glenn “Grand Exalted Walrus” Orr. Their nicknames were aquatic themed, and their club’s name came from their underwater rituals. The exclusive club had its own initiation process. One of the difficult entry exams involved making a 30-foot dive, without swim fins, and surfacing with three abalone sea snails. This tested their breath holds, especially because as free divers they shunned any fancy gadgets that allowed for breathing. Another task was to catch a shark of any kind with their bare hands. They would collect the horns — toothlike bones on the dorsal fins — from horn sharks and dangle them from the rings on their swim trunks as souvenirs. These horns would scratch against the sandy bottom of the ocean as they swam.

In the days when finding ready-made equipment was futile, the Bottom Scratchers had to be creative. Prodanovich fashioned a dive face mask using an automobile radiator hose for the strap and two circular mirrors modified from compact makeup cases for the faceplate. This helped him see underwater as he watched 40-pound halibut swim and 15-pound lobsters crawl on the ocean floor. Prodanovich used eyeglass lenses inside his face mask for clearer vision below the depths.

Wetsuits hadn’t yet been invented. In World War II, the US Navy Underwater Demolition Teams (UDTs) — the predecessors to Navy SEALs — relied on grease, which they used to slather on their bodies to protect their core temperature from falling to dangerous hypothermic levels. The Bottom Scratchers didn’t even have that luxury and braced 55-degree water for only a few hours at a time. They were the pioneers of skin diving and set the industry standard of many gear implementations that evolved beyond old parts found in one’s garage.

Wally “One Long Dive” Potts joined the Bottom Scratchers in 1939. “In those days, the ocean was like a freezer,” Potts said. “If you were planning a dinner with friends, you went to the ocean to collect fresh food.”

First they used five-pronged frog-gigging spears to hunt grouper that weighed over 200 pounds. Prodanovich then crafted and patented a powerhead spear tip with a .38-caliber cartridge that could catch these larger fish with ease. Powerheads, or bang sticks as they are called in modern spearfishing, are specialized underwater firearms that are typically used for protection against nosy sharks. Each time they went out they thought of newer and more efficient ways to spear fish. Potts and Prodanovich innovated modern speargun technology; Prodanovich used two stainless-steel pots to create the “Jackpot reel” and Potts later developed a plastic version of this design. Potts was later credited for the creation of the rubber-band-powered speargun.

As the years went by others contributed to their industry. Owen Churchill of Churchill Rubber introduced his rubber swim fins in 1940.

“The first thing [about fins] I was impressed with was you could hear the water going by your ears,” said Potts. “Plus, before, it had taken several kicks to get to the bottom; with fins it only took a couple.”

The public’s first impression of the Bottom Scratchers was of reckless oddballs entering the shark-infested waters. Public opinion, however, changed as more people read about their extraordinary exploits in local newspapers. Their expertise in underwater diving became a coveted asset among the first responder community. Orr alone was personally responsible for locating 207 shipwrecked boats, 15 dead bodies, and 12 automobiles lost at sea.

Over several decades their invite-only club ultimately grew to 19 members — all with impressive aquatic resumes. Carl “Professor Gray Whale” Hubbs served as the founder of Hubbs SeaWorld Research Institute, which later erected parks in San Diego, California, and Orlando, Florida. Lamar “Soup Fin” Boren was a world-famous underwater cinematographer and also worked on the TV series Sea Hunt, and Potts acted as a villain in the movie adaptation of the same name. Jim “Sheephead” Stewart, the youngest member of their crew, would go on to become the chief diving officer emeritus at the world-renowned Scripps Institution of Oceanography.

Connie “Dr. Grouper” Limbaugh is remembered for introducing SCUBA to commercial divers in 1949. Skin Diver Magazine called Limbaugh “the greatest diver in history” for his work in research diving, underwater imaging, and studies of shark behavior. Limbaugh was killed in an underwater cave in France, one of two Bottom Scratchers to be killed while practicing the sport. The other was Harold “Parrot Fish” Riley, who mysteriously died at Torrey Pines in 1970.

The passion these men had for constant innovation helped make spearfishing legal in the state of California. They thrust the sport into the spotlight, and today spearfishing is mainstream, adopted by those with a sense of curiosity and the itch to explore.