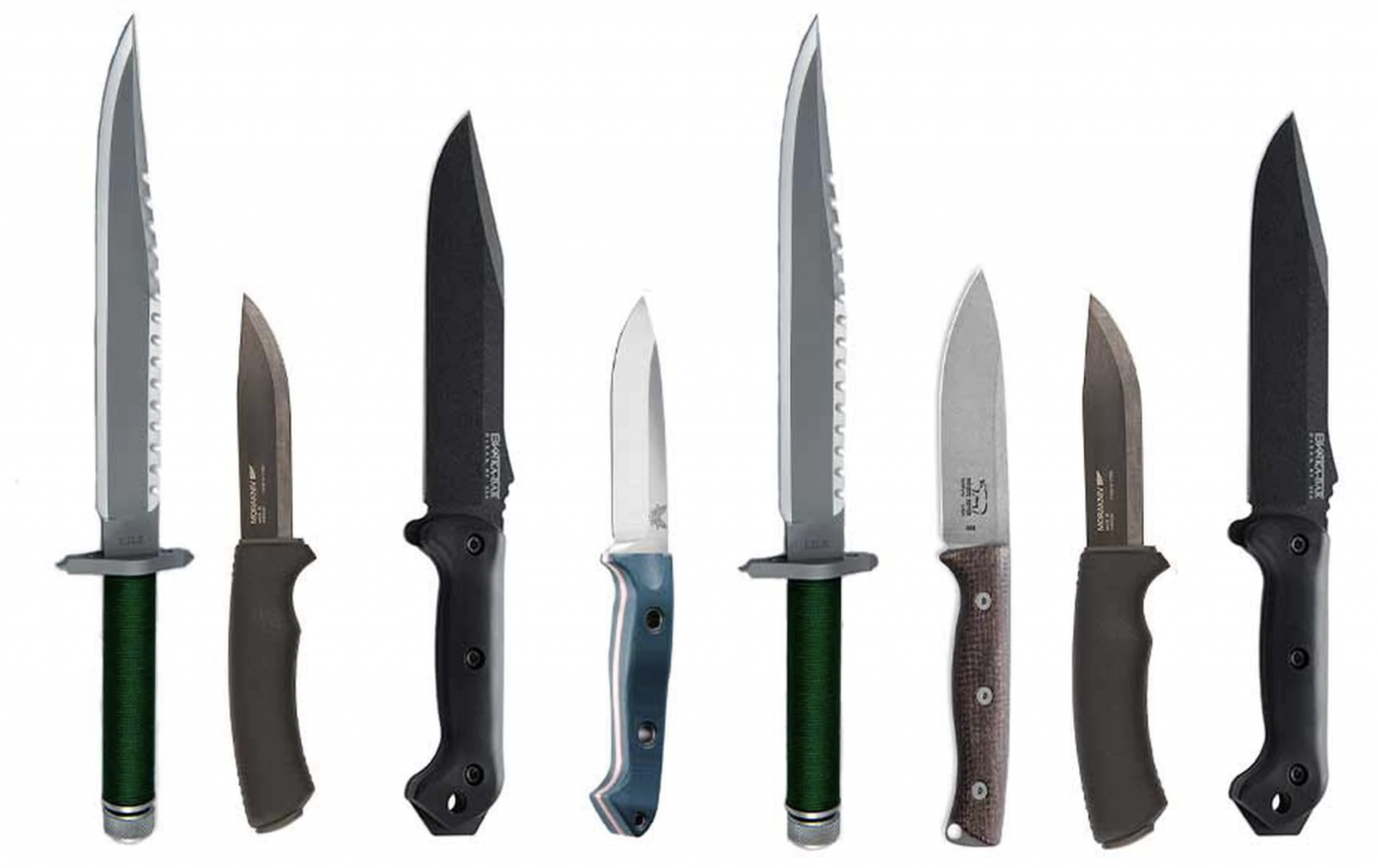 The terms “bushcraft knife” and “survival knife” probably go back to the 1980s. The first comes from a seminal book by the Canadian survival expert Mors Kochanski. Bushcraft was published in 1987 and is an instruction manual on how to live in the Great North Woods with an absolute minimum of equipment.

The bushcraft knife, to Kochanski, was a tool with which you made wooden tools, everything from a fire drill to a canoe paddle. His choice was the original Swedish Mora Knife, a modest and very inexpensive item with a laminated 4-inch blade, a wooden handle, and no hilt, a feature on which he insisted. From that time forward, every knife that is designated “bushcraft” resembles the Mora.

Kochanski did not expect the knife to do everything. His tool list also includes a pot, an axe, and a saw. Other wilderness experts share his view: There is no knife that will do it all. Townsend Whelen, about as capable an outdoorsman as I can think of, carried a Marble’s Woodcraft fixed-blade knife and a three-blade stockman pattern folder. Whelen said that 90 percent of what an outdoorsman does is best suited to a big folder.

Nessmuk (George Washington Sears), the outdoor writer who pioneered the idea of lightweight camping, carried a fixed-blade knife of the pattern that bears his name, plus a custom-made double-bit hatchet, and a two-blade folder. Horace Kephart carried almost exactly the same combination—a fixed-blade knife of his own design, a small hatchet, and a single-blade jackknife.

None of these men were survivalists, nor would they have understood the term. They were simply interested in living in the wilderness in reasonable comfort for an extended period of time with the least gear possible.

A good bushcraft knife is essentially a whittling knife, so it must be nimble. It can’t be a tool of brute force, as the survival knife must on occasion. I think a 4-inch blade is about ideal for one, and you don’t want a lot of curve in the blade. A skinner it ain’t. Some of the better ones around are the Mora Bushcraft, the Mora Garberg, and the Mora Bushcraft Forest Knife. Mora also makes the Viking, which is a near-exact copy of what the Vikings used 1,000 years ago. It’s a limited production item, but if you can find one, get it. Or there is the Benchmade Bushcrafter, and the White River Ursus 45. These latter two are not budget-priced, but they’re worth it, and if you want something fancy, ask any custom knifemaker for a showy bushcraft knife and he’ll know exactly what you’re after. 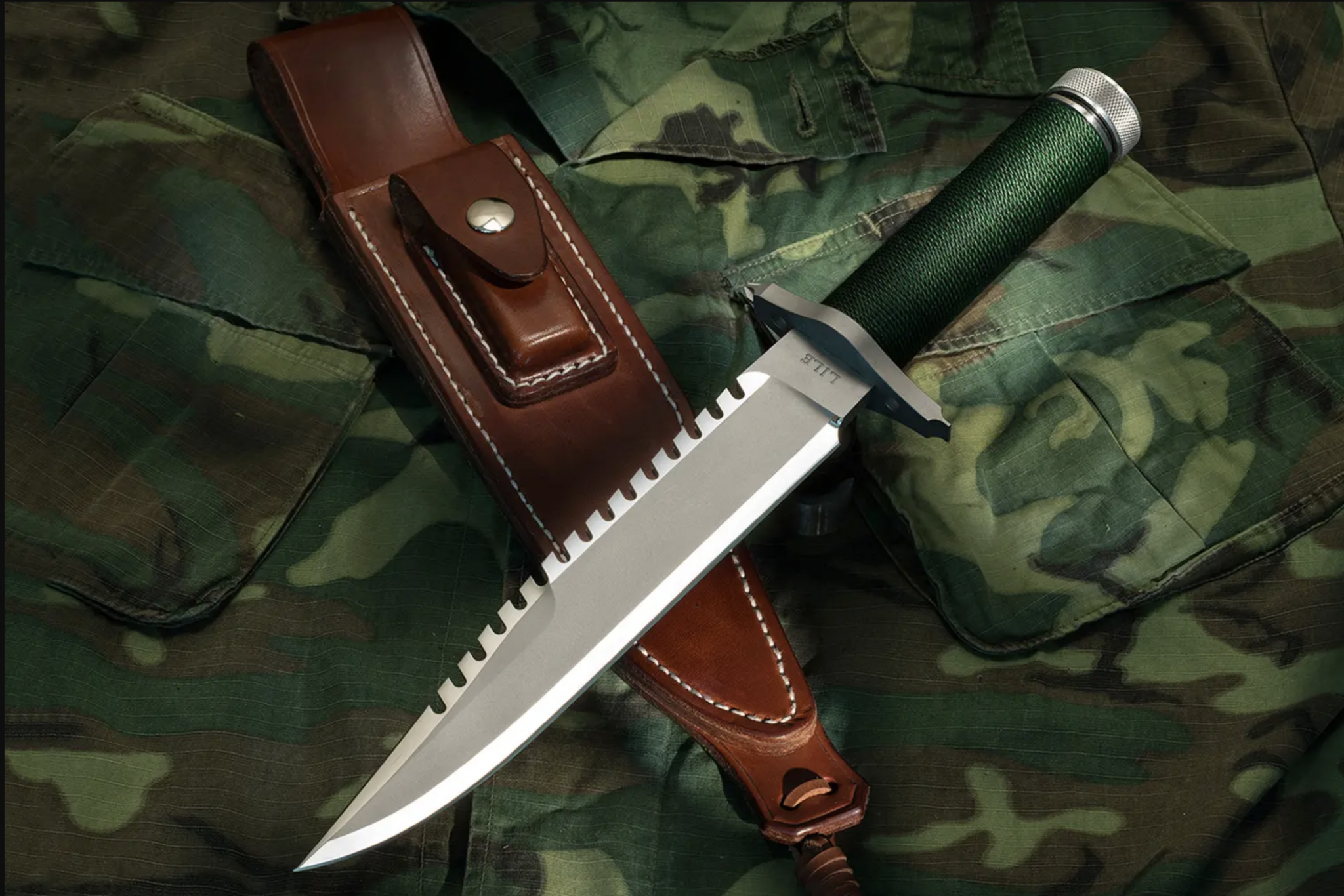 What You Want in a Survival Knife

Our modern idea of a “survival knife” probably started with John Rambo, former Special Forces trooper. The original Rambo knife was the product of Arkansas smith Jimmy Lile and was a 9-inch-bladed monster with saw teeth up the spine, and a hollow handle that held a needle and thread, a compass, and God knows what else.

Rambo made his debut in a movie called First Blood which appeared in 1982. It did well at the box office, and positively electrified the custom-knife business. In all of the subsequent Rambo movies, Sylvester Stallone carried a variation on the first knife. This is not a coincidence, since in real life he has been a collector for many years.

There’s nothing peaceful about a Rambo knife. It’s designed for desperate situations. In First Blood, Rambo, who carried his cleaver in Vietnam, murders a pair of Doberman tracking dogs, stabs a deputy sheriff in the leg, impales and butchers a wild pig, whittles booby traps, menaces a sheriff and a National Guard deuce-and-a-half driver, and sews up his own arm.

(When the film came out, I asked a friend of mine who was Special Forces, two tours, South Vietnam, Republic of, if he would have used a Rambo knife. “Sure,” he said, “if I could have found someone to carry it for me.”)

The original survival knife in America goes back to the Mountain Men. Mostly these were butcher knives, but they were pretty close to what a camp knife, or survival knife, is today: big, heavy, indestructible, not designed to do anything particularly well, but able to do just about anything.

In Europe, the Saami people, who live around the Arctic Circle, have evolved one of the best survival knives of all, and they’ve used it for real, day in and day out, for probably a millennium. It’s called the leuku, and is a first-class knife, no doubt about it.

The minimum size blade for a survival knife is 7 inches, and the max is 10. The best length is probably 9 inches. This length and weight enable the knife to double as a machete or a hatchet. Shorter and you’ve got a plain old knife. Longer and you’ve got a full-blown machete.

I’ve found that carrying a 9-inch knife is a pain in the short ribs. The best position, if you want to wear it on your belt, is at the left front (assuming you’re right-handed) with the handle forward at an angle. What works better is to lash the scabbard to your bugout bag or to carry it in the bag. 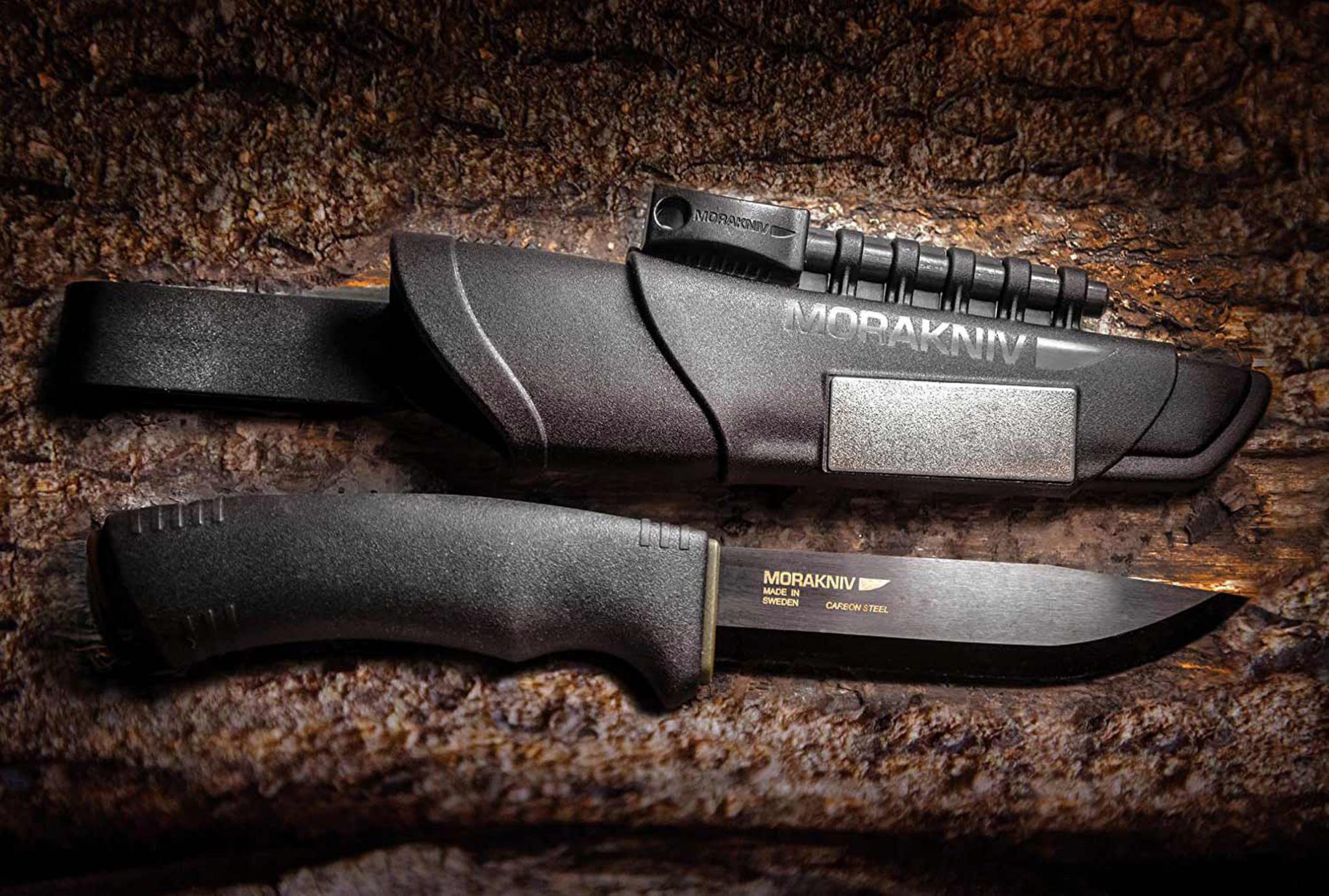 Here are some general considerations for both bushcraft and survival knives. You want a handle that will not be damaged by impact, or water. It should be oval in cross section, not square or round. It should also be long enough to accommodate your hand with a glove on. In my case, this means 5 inches long at the absolute minimum, and I have a number of knives with handles that are 5¼ and 5½ inches, and I like them a lot better. You should be able to use the knife fairly well with a glove on, and if you need to use it barehanded in the cold, it should not give you frostbite.

There are some very bad handles out there. Some years ago, I tested a survival knife whose grips were so sharply textured that I had to wear a tactical glove to chop with the thing. The handle’s scales were detachable courtesy of four tiny Allen-head screws which were guaranteed to get lost among the dead leaves.

Don’t plan on using either type of knife as a weapon. As my colleague Bryce Towsley points out, if you are about to get into a fight armed with your survival knife, you need to re-think the way you’re doing things.

Don’t buy a knife that’s hard to re-sharpen. There are all sorts of steels out there, some of which can hold an edge for a long time, but they all have to be stoned eventually, and the tradeoff for high edge retention is difficulty in getting the edge back. I think that one of the reasons that Ka-Bar’s Becker series of knives is so popular is that their 1095 Cro-Van steel resharpens so easily.

Sheaths. There are plenty of wonderful knives around, but very few wonderful sheaths. This is probably because manufacturers, in order to keep prices down, cut corners on their scabbards. Becker uses a hard-plastic scabbard, and if you stick a knife in one, it sounds like the caves outside of Madrid where the gypsies dance with castanets all night. A cheap sheath will announce your presence to the world, which may or may not be a problem, or it will lose the knife, or let it punch through. There are probably half a dozen makers of custom sheaths, both leather and kydex, for knives of both genres. By and large, they cost as much as the knives, and up to twice as much. They’re worth it.

And finally: If you read Bushcraft, which I strongly recommend, you’ll note that Mr. Kochanski devotes as much space to the prevention and treatment of cuts as he does to the use of the bush knife. He was no fool, and died last year from mesothelioma at the age of 79, rather than bleeding out in some forest clearing because he used a knife or an axe without knowing what he was doing.

This article originally ran on May 11, 2020, on fieldandstream.com.