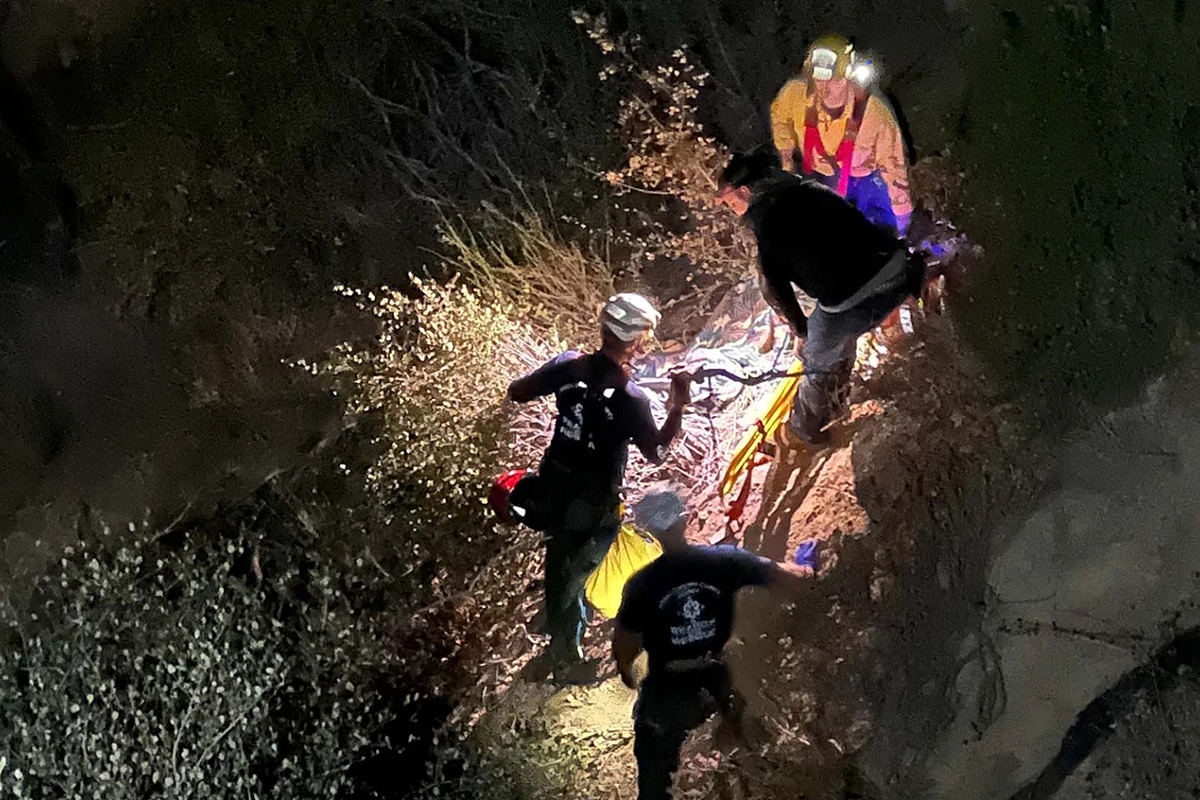 Los Padres National Forest sprawls across coastal California, with nearly 2 million acres of chaparral, Jeffrey pine, and white fir running up peaks that turn silver with sun or snow, but in the dark, it’s pretty black, which is probably why a hunter drove his ATV over a crag, plummeting 10 stories.

It was early Aug. 13, the beginning of deer season, and other hunters heard him firing off his pistol, a loud mayday that rang through the valley. One of them had gone down the cliffside, swaddled the man in a blanket, stabbed holes in the ends, and looped bare stump branches through them to cinch him to the mountain.

“If he had rolled a couple feet farther it would have been much, much farther down for him,” VanderZwaag told Coffee or Die Magazine. “He came to a rest in a decent spot, but had he gone a few more feet it would have been down several hundred more feet and probably would have ended differently for him.”

But now the crews had to save the man, and that wasn’t going to be easy. First they had to figure out what the tumble to the ledge had done to the hunter’s body, and then brainstorm a high-angle rescue to tug him back up the cliff.

So they rigged Travis Hone in a harness and then lowered him down the mountain. It was the Engine 13 paramedic’s first rope rescue.

“I guess it’s just a different feeling when you’re actually like, going over the side for a real patient, rather than in a scenario,” Hone told Coffee or Die, adding he was a lot more worried about the hunter’s condition “than the act of getting to the patient, if that makes sense?”

And his condition wasn’t good. Hone figured it was probably a fractured femur. The soft and unstable ground underneath the injured man also wasn’t helpful, and neither was the ledge he was on, nor the wall of rock and dirt to get there. It was so steep that Hone had to keep hugging the hill to keep himself from falling off it.

“I’m kind of, like, sliding down a little bit each time I’m trying to move,” Hone said.

The hunter who had gone down first was still there, and out of the blanket next to him came the voice of a man who was conscious, could talk, and didn’t seem to be suffering hemorrhagic or neurogenic shock.

So Hone radioed for a Stokes basket and some gear to stabilize the injured man’s spine.

Down came a pair of volunteers from the Santa Barbara Search and Rescue.

They worked together to stabilize the man’s neck with a cervical collar, gingerly maneuvered him onto a backboard, and then tied him down.

The Stokes litter stalled on an outcropping 15 feet above them.

The rescuers had to push the backboard up the mountainside, foot by foot, until they reached the basket, a chore Hone later described as “a little nerve-wracking.”

But they made it. They reattached the ropes to the litter, and it was hoisted up to the waiting paramedic and emergency medical technician from American Medical Response.

A deputy’s sport utility vehicle took the hunter to the ambulance.

Before the sun rose, they’d rushed him to Santa Barbara Cottage Hospital, capping a rescue that took more than four hours but saved a life.

This content was originally posted by Coffee or Die magazine in August 2022.