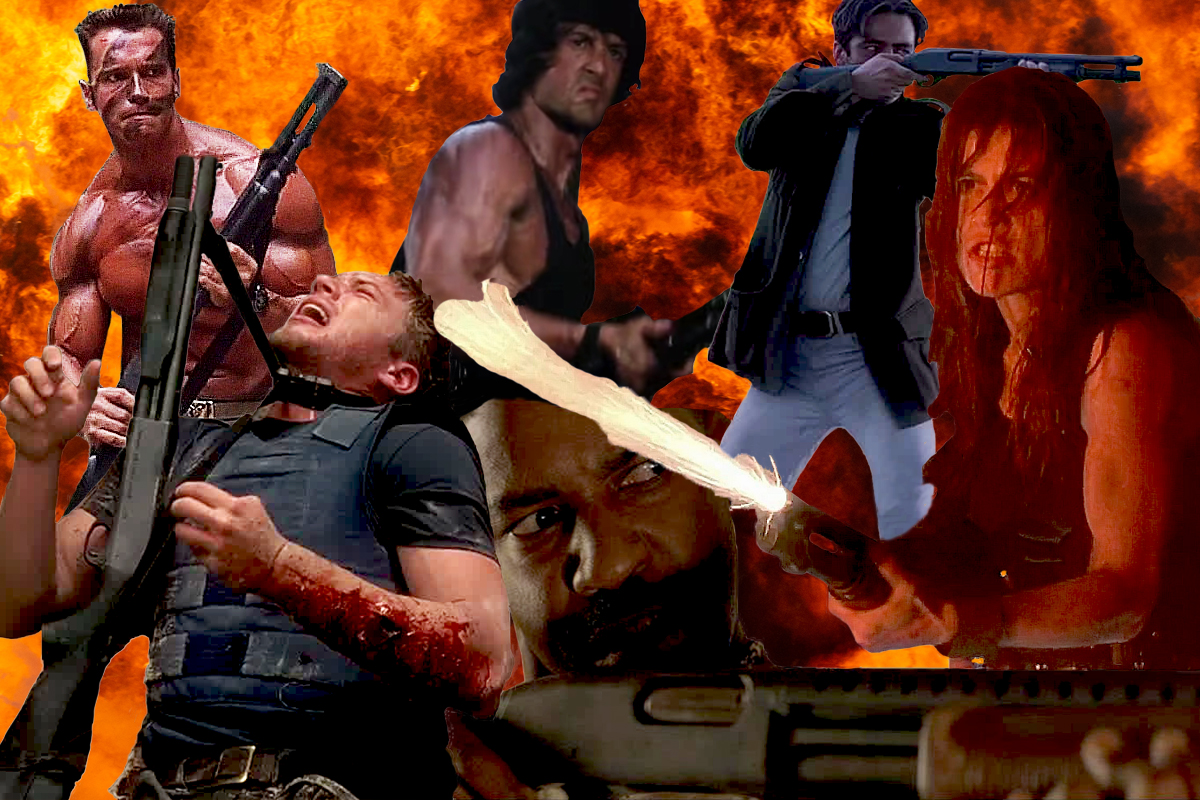 The Remington Model 870 shotgun, usually just called the Remington 870, is one of the most popular pump-action shotguns in history. Since it hit the market in 1950, more than 11 million 870s have rolled off the line, but that progress took a long pause after Remington’s most recent and final bankruptcy filing last year, which saw its various holdings broken up and sold off.

In September 2020, Roundhill Group LLC bought the non-Marlin portion of Remington’s firearm business for $13 million, and fans of the 870 waited. Earlier this summer, it was announced that Remington was back in the business of making guns, including the venerable 870 shotgun.

To celebrate its return, we’ve chosen the five most badass moments from movies featuring the 870 shotgun.

John Rambo is known for machine guns, bows with explosive arrows, and huge badass knives — but one of the coolest scenes in the bombastic genre-changing sequel Rambo: First Blood Part II involves pretty much the same shotgun Sarah Connor used in T2, just with older furniture.

When the river pirates Rambo hired earlier double-cross him and make a deal to turn him, his partner Co Bao (Nickson), and an American POW, over to the Vietnamese army. After they’re seemingly disarmed, Rambo waits until the lax pirates turn their attention to Co, and slips two small knives concealed in his belt into the chest of a pirate holding a Remington 870.

The pirate captain tries to shoot Rambo with his pistol. When the dead pirate’s body drops, Rambo is holding his 870 and proceeds to waste everyone on board with steady and devastating fire. The one guy who sneaks up on the stern, Co takes him out with her AK.

What was already a baller scene gets even more intense when the inbound army patrol boat sees the gunfire and opens up its twin .50-cal machine gun on the boat, shredding it to splinters. But that’s fine because Rambo knows where the pirates keep their RPG.

Oh, this movie. I grew up loving this movie and was utterly shocked at how insanely over-the-top and ridiculous it is. That’s a compliment, by the way. When people who don’t like action movies think of 1980s action movie tropes and cliches, this is the flick they’re thinking of — it has them all.

The infamous gearing-up scene just before John Matrix (Arnold) attacks the drug kingpin’s island mansion where his daughter is being held captive sees him sling a massive Remington 870, but that’s not an extended mag tube that comes flush with the barrel. No, it’s actually an early laser sight assembly made specifically for the Remington 870 by Laser Products Corporation, which later became a little company called Surefire.

The laser sight was located in the false mag tube extension and clamped onto the barrel at the muzzle. It gives the shotgun a cool and distinctive look, but if you pay close attention, it becomes an extended mag tube in some shots, and in others, it’s a rubber dummy gun (like the close-up shot of Matrix scanning the compound with his magic digital binoculars.

The shotgun is the last weapon to be used from Matrix’s considerable arsenal other than his knife, which was bolstered by an M60E3 machine with a full belt he took off a dead bad guy.

When he suits up, he’s carrying a Desert Eagle Mark I pistol in .357 mag, an OG Uzi submachine gun, the shotgun, a Valmet M78 light machine gun with an RPK style stock, a prop replica of a four-tube M202 FLASH rocket launcher, several M67 hand grenades (actually M69 training grenades) tied with paracord to D-rings on his vest by the pin, and a sling bag full of remote-detonatable magic claymore mines that can incinerate entire buildings with fireballs.

I don’t think he carries a single spare mag or shell for any of it.

This is a somewhat forgotten neo noir crime thriller that got a little lost in the flood of teen comedies and CG-heavy spectacle films like Gladiator, Cast Away, and Road Trip, but it’s worth remembering. It feels a bit like a Michael Mann movie crossed with something from Taylor Sheridan.

A simple but effective Remington 870 plays a big part in the two most action-packed sequences in the film, and they’re both intense. Just after the “Moving!” attempted kidnapping of an extremely pregnant Juliette Lewis, a gun battle erupts off-screen, and then it moves on screen as Mr. Parker (Phillipe) and Harold (Del Toro) shoot it out with the two bodyguards. Harold is on the 870.

In the final act, the Remington gets a ton of screentime in of the best and most underrated movie shootouts ever.

Both Parker and Harold start off the big showdown with longs guns — this time Parker is on the 870 and Harold is carrying the same IMI Galil ARM rifle with a folding bipod he used as a sniper rifle earlier. In the initial heavy barrage of gunfire, Harold takes a handgun round in the vest and fires his only two mags for the Galil, drops it, and switches to his pistol. Parker takes a round to the calf, but keeps running and reloading the 870, which he’s wearing slung in the ready position.

Parker still has the shotgun with him when he jumps into the old courtyard fountain that he didn’t know was full of broken glass bottles, but it’s out of ammo and he uses his 1911 to make a last stand. The only criticism I have is that sometimes it seems Parker fires two or more quick shots with the 870 without pumping the action in between, but that’s more likely an editing error rather than a stunt error.

“You know I’m surgical with this bitch, Jake. How you want it, dog, huh? Closed casket? Remember that fool in the wheelchair? How you think he got there?”

This is a movie full of great moments, and we get to see a really interesting custom Remington 870 in the final, long-awaited all-out confrontation between Alonzo (Washington) and Hoyt (Hawke).

After Hoyt forces Alonzo to take off his twin stainless S&W 4506 pistols and surrender his backup Glock 17, he flicks a lit cigarette at his eyes and drops to the floor, where he has the 870 with a sawed-off stock in a wire swivel mount under his bed. He fires a quick shot at Hoyt’s legs, forcing him to dive for cover, and then comes up with the shotgun.

The gun is interesting in that it has the heat shield found on the 870 trench gun configuration, also found on the M1897 trench gun, but with the later Mark 1 shotgun bayonet mount that just looks extremely badass. And like everything he does, Alonzo uses it with some style.

While Alonzo doesn’t do much more than shoot up his girlfriend’s apartment and almost kill his own son, the assault finally lets Jake just how willing Alonzo is to take him out, by his own hand if necessary. From there it’s a running and gunning fight that ends in the street with the unforgettable “King Kong ain’t got shit on me” speech that contributing to Denzel’s Oscar for this role.

Of all her badass moments in Terminator 2, this was definitely Linda Hamilton/Sarah Connor’s most badass. Once everyone saw her working the pump action on her 870 with one hand, it showed up in a disturbing amount of crappy action movies for years afterward. Thing is, in T2, Sarah has a reason to pump the shotgun one-handed.

In the scene before, when the T-1000 is torturing her and trying to get her to bait her son, he drives one of his fingers-turned-steel-spike through her shoulder. While this isn’t the case for a majority of Hollywood movies, this wound actually affects her ability to use her right arm. Amazing right?

She can keep her right arm braced against her body and use the hand to squeeze the trigger, but that’s about it. It looked awesome, it made logical sense, and when she drops the hammer on an empty chamber juuuuust before knocking the T-1000 into the vat of molten steel, the deflation and defeat on her face make your heart drop into your stomach. And then the elation of seeing Arnold riding the big machinery up to fire his last 40mm grenade into the T-1000’s chest — just bravo Mr. Cameron. Bravo.

Plus, Sarah’s version of the 870, which she snagged from a police SWAT van, is one of its most vicious-looking configurations: extended mag tube that’s even with the barrel and a top folding stock.

Read Next: The All-Time Best Shotgun Moments in Westerns