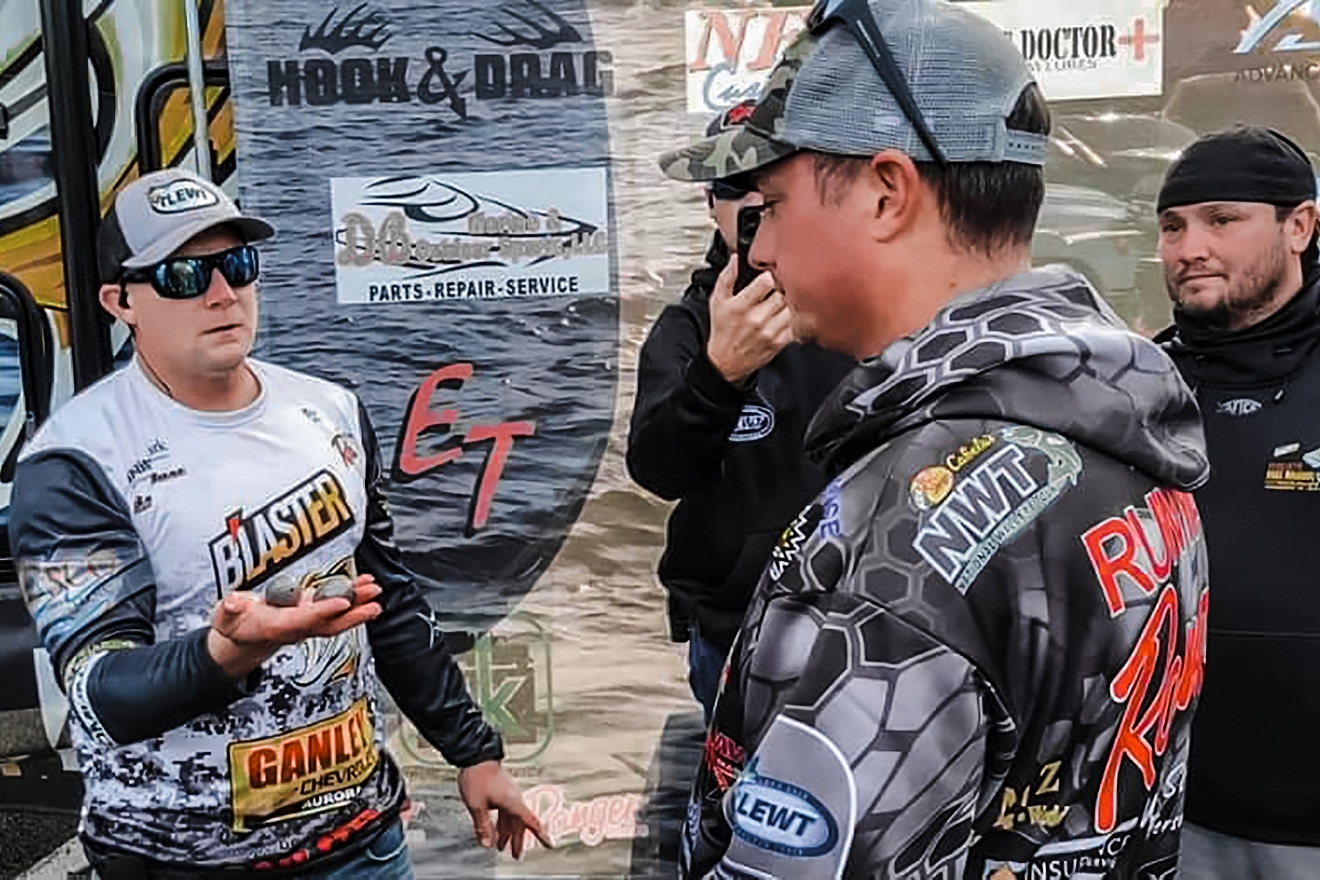 UPDATE Oct. 17, 2022: The two pro anglers who were publicly outed in a viral video for allegedly cheating in an Ohio walleye tournament late last month have officially been charged with a litany of crimes. On Oct. 11, law enforcement officers with the Ohio Department of Natural Resources and the Hermitage Pennsylvania Police Department executed a search warrant at the residence of one of the accused anglers, Chase Cominsky. Authorities seized the boat and trailer he and Jake Runyon used in the tournament. They are currently being held as evidence.

An Ohio Grand Jury indicted Runyon and Comnisky on Oct. 12, and the two now face three fifth-degree felony charges each. The charges include cheating, attempted grand theft, and possessing criminal tools. The anglers also face misdemeanor charges of unlawful ownership of wild animals in relation to the filets the two stuffed into the guts of their tournament walleyes.

If convicted, the anglers could face up to 12 months in prison and $2,500 in fines for each felony charge, as well as an indefinite suspension of their fishing license privileges.

Original Post from Oct. 3, 2022 – The world of pro fishing is freaking out over a cheating scandal caught on video during a tournament in Cleveland, Ohio, last week. During the final event of the Lake Erie Walleye Trail’s 2022 season, two competitors weighed in five walleye that had lead weights and fish filets stuffed into their guts. Video of the weights and filets being cut out of the anglers’ fish to angry cries from the surrounding crowd of pro anglers has since gone viral over the weekend.

Chase Cominsky of Hermitage, Pennsylvania, and Jake Runyon of Cleveland, were poised to win nearly $29,000 in the Team of the Year competition — and that’s when the walleye cheating scandal at the scales erupted for the successful tournament anglers.

Cominsky and Runyon were the front runners in the competition heading into the final weigh-in. But, when the team’s five-walleye catch crossed the scale, tournament director Jason Fischer smelled something fishy.

“When I saw [Cominsky and Runyon] sitting in the bump tank pulling their fish and putting them into the basket, I saw what looked like four-pound fish,” Fischer said in an interview on the Bigwater podcast. “Nothing big. Nothing small. Those were average Lake Erie walleye. Those were four-pound cookie cutters — just great, solid, healthy fish.”

But when the anglers tossed the first walleye on the scale, the numbers just didn’t match up. That 4-pound cookie-cutter, as Fischer described it, tipped the scale at 7 pounds, 9 ounces.

“I see a lot of fish come across the scale,” Fischer said. “I look at these fish all season long. Not only in the tournaments but when I’m fishing. I’m fairly accurate. I’m within a pound or so every time.”

While anglers regularly exaggerate the size of their catch, the scale usually doesn’t lie. When the team’s five-count basket of what looked like average fish busted the scale at almost 34 pounds, it was pretty obvious something was up, Fischer said.

“It felt like the wind just went out of my sails. I didn’t know what to do,” he said in the interview. “I heard the crowd kind of grumbling. I just knew I had to do something, so I inspected the fish.”

Fischer said he initially just wanted to see if the walleye were alive. The first two fish he picked up from the basket were not, so he started squeezing them to see if they had the firm feel of fresh fish.

“I wanted to feel if it was mushy because both of these fish were dead,” he said. “When I squeezed the belly, I immediately felt things in the belly of this fish — hard objects.”

That’s when he asked for a knife.

Fischer sliced open the bellies of the walleye while the crowd lobbed insults and expletives at the anglers. When Fischer popped a large lead weight out of the belly of the first fish, the tension in the crowd boiled into full-blown rage.

“We got weights in fish!” Fischer shouted.

The tension in the crowd skyrocketed. In a video of the scene, people in the crowd can be heard yelling, “Where’s your crown now?” and “You fucking piece of shit!”

A slit up the belly of the second walleye produced two lead weights and a walleye fillet. Runyon stood by silently watching his title and his reputation crumble.

The entire weigh-in episode was caught on video, which has since gone viral. The damning video not only shows the weights and fillets, but it also shows the angry crowd closing in on the teammates.

“Call the fucking cops!” yells another.

The video also shows Fischer informing the alleged scammers that they need to leave. He also addressed the growing anger in the crowd, saying, “I don’t want anybody to touch these guys.”

Some shouts of “I knew it!” from the duo’s fellow competitors suggest there have been bubbling suspicions surrounding the anglers’ lengthy history of tournament success; the duo won a boat and a hefty cash prize at the Walleye Slam in 2021.

A local law enforcement officer was fishing the event and stepped in to handle the escalating situation. Cominsky and Runyon were disqualified, and the case is currently under investigation by law enforcement. Although charges have not yet been filed, evidence has been turned over to the Cleveland Metroparks Police and the Ohio Division of Wildlife.

Fischer later apologized to competitors and fans on the tournament’s Facebook page:

“Disgusted guys and gals, I’m sorry for letting you down for so long, and I’m glad I caught cheating taking place in YOUR LEWT at the same time…I hope you know now that when I say ‘you built this LEWT, and I will defend its integrity at all costs,’ I mean it. You all deserve the best.”

The tournament page also posted congratulations to the tournament’s official winners, Steve Tsczyko and Chris French, as well as the winners of the 2022 Team of the Year Championship, Steve Hendricks and Brian Ulmer.

READ NEXT – Meet Brandon Palaniuk: Hunter, New Dad, and Angler of the Year