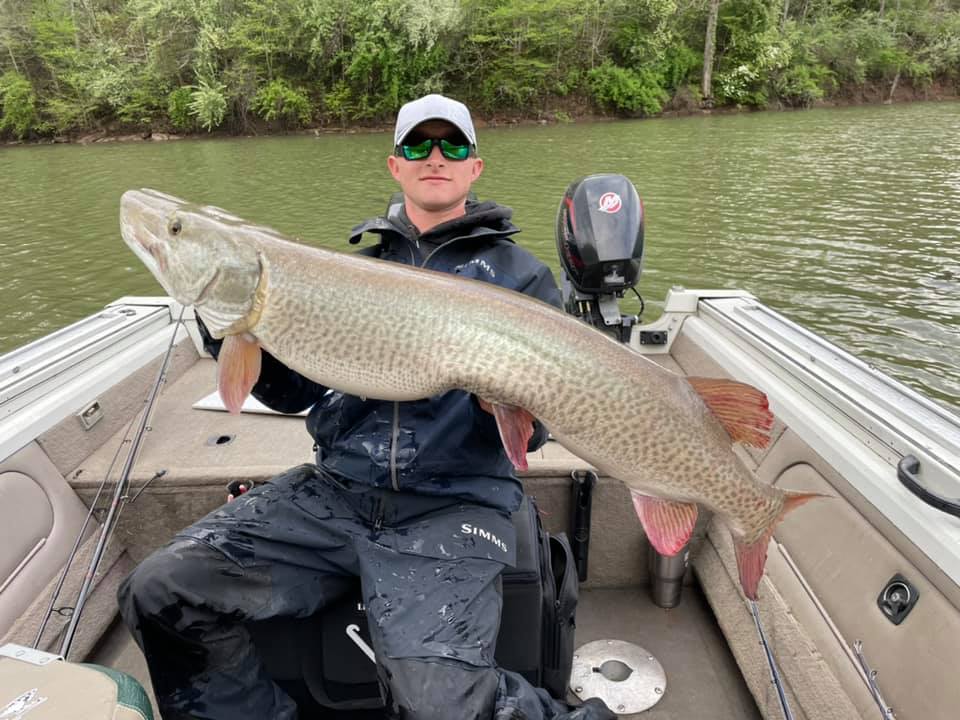 All it took was 15 minutes and some major luck for Chase Gibson to land a new West Virginia muskie record. The fishing guide caught the new state-record muskellunge, which weighed 39.6 pounds and measured 54 inches long, on Burnsville Lake on April 30.

The crazy part? He threw it back.

The day began like any other for 19-year-old Gibson, who had the day off from guiding and decided to do a little fishing, just for fun.

“I called my buddy, Frank, and we decided to give Burnsville a try,” Gibson told the Charleston Gazette-Mail. “I do most of my guiding at Stonewall Jackson Lake, and I wanted to do something a little different.”

“We pulled into a spot where there was some standing timber,” he continued. “I was at that spot in December and had a big muskie follow one of my lures, so I figured we’d start there.”

Gibson attached a Muskie Innovations Dyin’ Dog lure to his bite leader and started casting. A short time later, he had attracted one heck of a fish. Gibson, who has plenty of muskie angling experience, knew he had caught something special — possibly even record-breaking — since he had previously caught muskies larger than 50 inches, and he could tell this one seemed close, despite its being underwater.

“I felt like it was bigger than 50, but I didn’t know how much bigger,” Gibson said.

As Gibson reeled it in, the line almost got wrapped up in the trolling motor. “Fortunately,” he said, “Frank was waiting with the net and just scooped the fish up when it came up on the other side of the boat.”

It was a post-spawn female and “barely hooked with one treble in the corner of her mouth,” Gibson said.

He called his friend Aaron Yeager, an assistant district fisheries biologist for the West Virginia Division of Natural Resources, who managed to get to the lake in about two hours while Gibson and his friend kept the fish netted in the water next to the boat. In order to qualify for the state record, the muskie’s weight and measurements had to be officially certified, a task Yeager and Jim Walker, DNR head fisheries biologist for the area, handled. Then, they helped Gibson release the massive muskie back into the lake, where it will continue to grow — unless another angler can catch it first.

Prior to Gibson’s catch, the state’s record was a 34.6-pound muskie that measured 53.5 inches long. Joe Wilfong hooked it in 2017 out of the Little Kanawha River, according to the Charleston Gazette-Mail.

In this case of catch and release, the muskie was definitely the biggest winner, though for Gibson, the positive reverberations through social media were a close second. And all it took was a wild 15 minutes of fishing on Burnsville Lake in West Virginia.