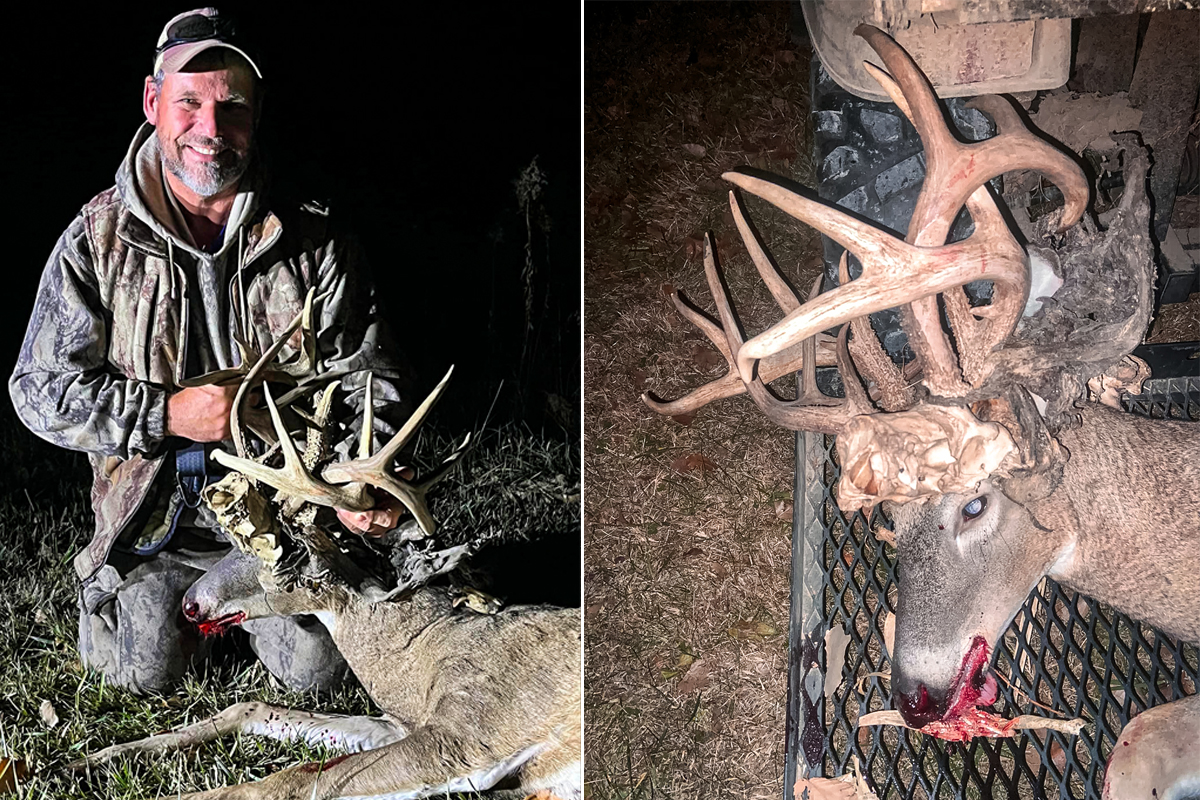 On Oct. 30, Mike Lewis, 52, shot a once-in-a-lifetime buck. It was a head-turner, not necessarily for his own rack, but because the buck was toting around some seriously hardcore headgear: Another buck’s antlers, with a decaying hunk of deer skull and spine attached, from a past fight that Lewis’ deer clearly won.

When Lewis, a bowhunter from Fairfax, Missouri, first spotted the approaching jumble of tines, his brain convinced him he was watching a non-typical whitetail make his way across a cornfield toward his treestand.

“He was following a doe at about 70 yards. It was low light, about 15 minutes before shooting time was over, and I just saw a whole lot of points,” Lewis told Free Range American. “I was just hoping he would keep following that doe to the trail my stand was sitting on.

“When she stepped into the edge of the timber, I think she smelled me. She stood there for a second and then turned and trotted back out into the cornfield, heading south away from me.”

Watching the doe’s hind parts grow smaller as she moved off, Lewis figured it was game over and that the buck would just follow his lady friend back across the cornfield.

“He turned and walked right to the same trail she was coming in on,” Lewis said.

When the buck stopped inside the woods to work a scrape, Lewis got his first up-close look at the snarl of tines on the buck’s head.

“When I first realized he wasn’t a non-typical, that he had another set of antlers in his antlers, he was only about 15 yards from my stand.”

When the buck stopped to work another scrape inside the woods, Lewis shot him at 10 yards with his Mathews Reezen bow.

“It was a good shot. When you can watch ’em tip over, that’s the best because there’s no guessing. He didn’t go 20 yards,” Lewis said.

“When he was walking in, the adrenaline was flowing, but it always does. It doesn’t matter if I’m shooting a doe or a 150-inch buck,” he added. “If I didn’t get the adrenaline rush, I wouldn’t do it.”

On top of the adrenaline, Lewis also had an overwhelming feeling of disbelief. Plenty of other hunters had doubts about the unusual deer and vocally shared those doubts on social media, as they so often do. Skeptics have claimed Lewis’ deer has to be a hoax. Many have even accused him of weaving the two racks together after the kill.

Lewis acknowledged that the whole thing is pretty freakin’ unbelievable but that his buck is totally legit.

“Nobody believes it at all because it’s just hard to believe,” Lewis said. “If I was to see it on Facebook, I’d be like, ‘Nah. Some dude did that. They staged it.’”

But Lewis has one wicked-ass trail camera photo (see above) snapped on a neighboring farm a mile and a half away 12 days earlier that proves it isn’t all a prank. In the photo, the skull, vertebrae, and rotting hide are clearly visible, dangling from the buck’s crown.

How Lewis’ deer ended up with the skull of another buck knitted through his antlers is a mystery. The Missouri Department of Conservation believes the buck probably tried to scrap with a long-dead carcass.

“With the cleanliness of the skull, we suspect the deer had sparred with a ‘dead head’ from last year and became locked up,” the Department explained in the comments of a Facebook post.

A scuffle with a cadaver buck may be the most logical explanation, but using the word “logical” may be a bit of a stretch. Sanity and logic aren’t typical motivators for a male of any species to butt heads with the deceased. However, rampaging hormones make bucks do stupid shit this time of year, which is why most deer hunters are head-over-heels in love with hunting the rut.

Lewis isn’t wholly convinced the buck was trying to play the dominance game with a dead adversary, although he can’t seem to land on a logical explanation, either.

“I don’t know if he found a dead head or if it happened maybe in early September right after they lost their velvet, and maybe they were just sparring. I’m with everybody else that says that skull is awfully clean. But you’ll see in the trail camera picture, just 12 days earlier, that he wasn’t that clean.” Lewis said.

“His antlers are really spiny and rough all around the main beam like he didn’t get a chance to rub them smooth, so even if he found a dead head, I think he must have found it early,” Lewis said. “I don’t know how it happened or where it happened. All I know is there’s a deer’s rack stuck in another deer’s rack.”

Lewis believes that if he hadn’t shot the bruiser buck, the deer probably wouldn’t have lasted until the next deer season.

“Honestly, he was in very poor condition. He was skinny and hadn’t been eating well. If he didn’t die because of the skull or get weak enough that the coyotes got him, I would guess that he would have dropped his antlers in early December, but he would have had a hard time making it through the winter,” he said.

The first thing Lewis did after his gnarly buck toppled over was text his son, Max Hopkins.

“I was sitting in his stand. He had hunted there all day Saturday and Sunday morning but hadn’t really seen anything. Sunday evening, he was going to sit in a different stand,” Lewis said. “I picked his stand because it was the closest walk from where we parked. That’s how much confidence I had. I didn’t think I was going to see anything because the weather was too nice for deer hunting. When there’s warm weather in northwest Missouri, the deer don’t usually move.”

Hopkins initially thought his dad was joking about the two knotted-up bucks, so he immediately left his own stand to see it for himself.

“By the time he got there, it was dark,” Lewis said. “It was great to share that with him, but the first thing he said was, ‘This is crazy!’ and I was thinking the same thing.”

Both the buck and the piece of the other buck are now at the taxidermist, and Lewis has plans to mount them just like he found them — laced together.

“I always said I wanted to kill a 200-inch deer. I just didn’t know it was going to take two racks to get it done.

“I’m just glad that God blessed me with this opportunity to take this deer. It’s a blessing, and I thank Him every day that I’m still healthy enough to get to do what I love.”

When Lewis isn’t in a treestand, he serves on the board of directors for Wounded Warriors Guide Service, an organization that takes disabled U.S. veterans hunting and fishing at no cost to them.

“I have never served,” Lewis said. “I just figured it was a way for me to say thank you.”

READ NEXT – Whitetail Institute: The Staying Power of the Food Plot King