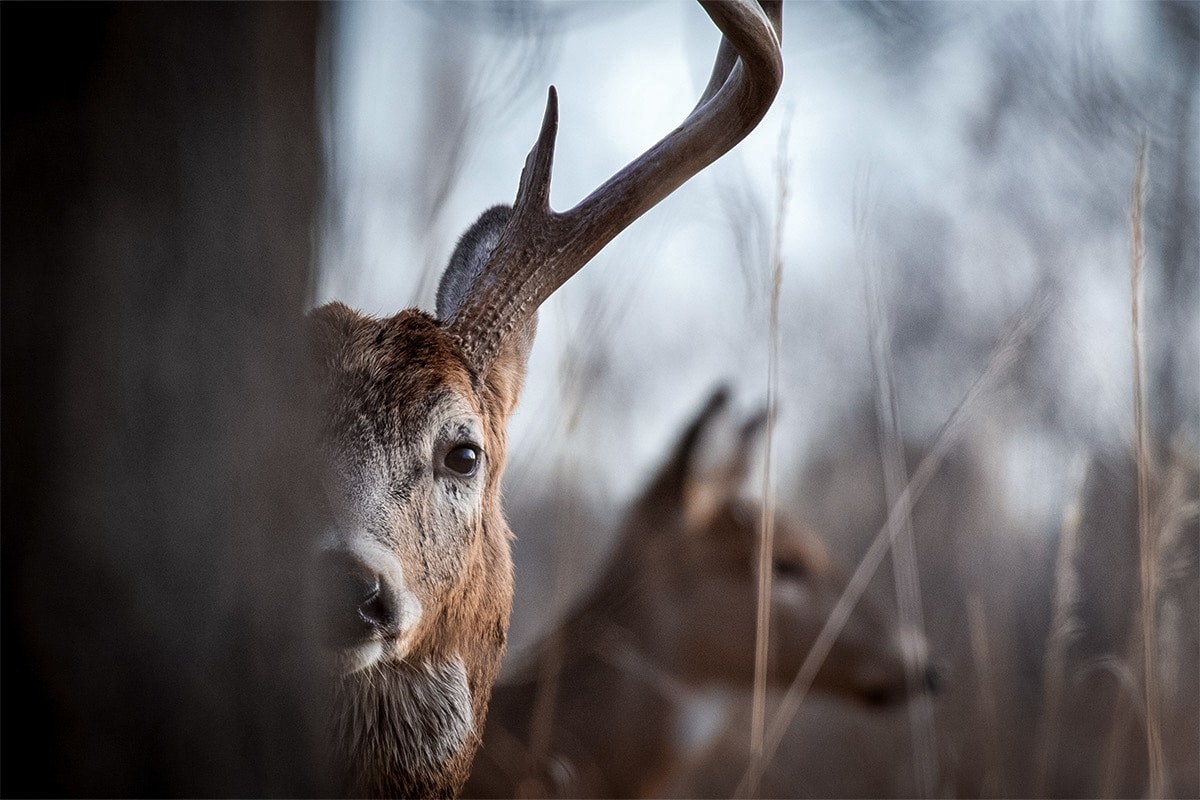 I slipped along the muddy bank of the Red River well before first light on the morning of Nov. 3, 2020. Mother Nature was not my friend as I worked my way toward the tree I had picked out while scouting a few months prior, largely based on what I understand about the whitetail rut from learning the intricacies of the whitetail deer gestation period in the region.

The high temperature in this area of eastern North Dakota was in the low-70s that day: unseasonably warm. It was nothing like what whitetail deer hunters think of when daydreaming about this rut phase — when the first does are coming into heat — in northern states.

Freezing overnight temperatures will usually harden the clay soil on the Red River at this time of year, making it easier to traverse on foot. Not that morning. Every step was met with a slip on the mucky bank or having to pull my boot out of 8 inches of mud.

I finally climbed into an oak tree — I was covered in sweat but didn’t blow a single deer out from the adjacent crop field. It felt more like an opening weekend than the rut.

We all have had it pounded into our heads: “It’s too warm out. Nothing is going to move.” But it was still Nov. 3. That trumps anything else when it comes to whitetails and the timing of the rut in a northern state like North Dakota.

An hour after daylight, I noticed a doe trotting through the thick bedding cover 75 yards to my left. Behind her was the buck — a good 10-pointer. He pushed her right down the trail behind me, and that encounter ended with a well-placed arrow at 15 yards.

“I used to think about it a lot more,” Kip Adams of the National Deer Association said when asked if he ever lets weather or moon phase dictate when he hunts the rut. “I used to believe that a cold front is coming, so deer are on their feet. I used to believe a lot of things because you kind of see some of that when you’re hunting or because you read about it. Today, we know so much more about actual deer behavior and actual deer movement patterns because of these GPS radio collars. That definitely has changed my thinking on some of that.”

Adams is a lifelong hunter, wildlife biologist, and the Chief Conservation Officer for the National Deer Association. He got his master’s degree from the University of New Hampshire and has worked for multiple state game agencies — that includes working as the deer and bear biologist for the New Hampshire Fish and Game Department.

Halloween flips the switch for him in terms of when he hits the woods as much as possible to try to catch bucks looking for the first receptive does.

“Particularly, in northern Pennsylvania where I am, it doesn’t matter if it’s this year, last year, next year, or five years from now,” Adams said. “Plan to be in the woods that very end of October and the first week of November in the northern two-thirds of the US. I want it to be cool. I grew up in the north and have fun hunting when it’s cold, but Oct. 31 or Nov. 1, if it’s 60 degrees. Guess where I am? I’m in a deer stand. Guaranteed.”

Hunters can learn a lot about the peak breeding date for whitetail deer (Odocoileus virginianus) in areas they hunt if they know when most of the fawns are born in the spring.

The gestation period for whitetail deer is approximately 200 days. It’s similar to mule deer. That means a doe bred in mid-November will drop her fawns near the end of May or early June.

The trigger for peak breeding in the north is synchronized by photoperiod — the amount of light an organism receives each day. Bucks can breed in these areas from the time they shed their velvet in late summer until their antlers drop, but a doe is in estrus and receptive to breeding for only about 24 to 48 hours.

Additional darkness throughout the day during autumn triggers increased production of the hormone melatonin. This leads to does coming into heat around the same time each year in regions with distinct seasonal changes.

For most of the northern two-thirds of the US, that peak breeding occurs in early to mid-November, with breeding taking place on a bell curve around that peak date.

“It’s extremely cut and dry,” Adams said. “We can measure fetuses from does killed late winter or in the spring, back-date those, and we know exactly when those does were bred. It’s not hearsay on, ‘Hey, this is when we think the rut is.’

“Biologists know exactly when it happens,” he added. “In the northern US, it’s very much driven by photoperiod.”

RELATED – Rifles Allowed for Illinois Deer Hunting, With a Catch

That consistent timing of the rut can be a life-or-death situation for both the doe and her fawns in northern climates.

Raising fawns demands a lot of energy from the mother, especially in terms of producing enough milk to nurse her offspring. Deer have evolved to time fawn drop to coincide with spring green-up. That gives the nutritional boost needed to raise fawns successfully.

Fawns born too early have a greater risk of mortality with a mother that is not in optimal condition. Fawns born too late run the risk of going into their first winter at a disadvantage by not being at optimal body weight.

The synchronization of peak breeding is important for the fawns’ survival in terms of the ability to overwhelm predators on the landscape. Bears, wolves, coyotes, and bobcats can only eat so many fawns in a short period of time before fawns are better able to escape.

“There’s a very fine line over the course of millions of years where whitetails have evolved to figure out exactly when they need to be bred in our northern environments such that it’s okay for the doe to raise it, and then okay for that fawn to maximize its chance for survival,” Adams said. “That does not swing at all by that moon phase.”

GOOD GEAR – Takes to the Sky With Our BRCC Flying Elk Roast here!

Why the Second Flurry of Rut Activity?

Does will come into estrus again 21 to 30 days after their first cycle if a breeding attempt is unsuccessful.

Hunters who experience what is often called a “second rut” in early to mid-December may have an unbalanced deer herd where does greatly outnumber bucks. More often than not, Adams said, that later rutting activity is a case of fawns reaching sexual maturity.

Fawns are capable of breeding for the first time once they reach about 70 to 80 pounds.

“That almost never can happen in November,” Adams said. “They’re just not old enough, but that happens particularly in agricultural areas [where they have more nutritional resources] in December or even January.

“That’s not to say there aren’t some does that didn’t get bred or does that did get bred and for whatever reason did not take, so they’re cycling again. That can happen, but in the north, a lot of that December to January rut activity is more a function of doe fawns that are hitting sexual maturity.”

RELATED – Hunting Forecast 2022: Extreme Weather Could Be Bad for Hunting

The Trickle Rut of the South

Whitetails in many southern states do not live by the same rules as their relatives to the north.

Hunters and researchers acknowledge a breeding period that can be much more spread out and inconsistent, not just from state to state but on much smaller regional scales throughout individual states.

“We started by saying that if you live in the northern two-thirds of the US that the rut’s going to be in November,” Adams said. “If you’re in the pocket in the southeast from Texas, Oklahoma, east through Florida, and the East Coast, the rut is all over the place. There literally are deer rutting somewhere in that south region from July through February. That’s crazy. We start looking and asking why is that and how can it happen?”

Mother Nature tends to be much less demanding for a specific peak breeding date in southern climates. Winters are less severe, and seasonal change less dramatic; meaning does are not punished as much for dropping fawns during a wider window.

“Some of those deer that come into heat really early or really late, it allows those genetics to continue,” Adams said. “Those in the north, if that happens, they get weeded out really quickly. The South allows it, so we tend to see it.”

Photoperiod change is less dramatic in the South than it is in the north. Genetics also seems to be another piece of the equation, Adams said.

Whitetails were nearly wiped out in the United States by the start of the 20th century. The entire population in the country was estimated at only 300,000 in 1890. Thousands of deer were brought to the South from across the United States and Mexico during whitetail restoration efforts of the mid-1900s. Many of those deer came from wide-ranging regions and had different peak breeding seasons.

“Those genetics that drives deer to breed at a certain time in those does are extremely, extremely strong in those deer,” Adams said. “A lot of those ruts we see in the south that are extremely varied appear to be related at least somewhat to the genetic stock of the deer that were used when they restocked those areas.”

That sporadic nature of breeding in the South can certainly make it more difficult for hunters to plan their hunts around the rut. For hunters in the north, it is much more cut and dry. Get in the woods as much as you can this November.

“The moon may influence deer movement some, but as far as the actual rut when deer are truly being bred, if you’re in the northern two-thirds of the US, that just simply doesn’t shift that much,” Adams said.

“Figure out when that is. For most of us, that’s going to be in early to mid-November. By understanding that and not worrying about when that moon is, that’s when you plan that vacation,” he said. “If it’s November, get in the woods. Don’t let all those outside sources influence you in a negative way.” 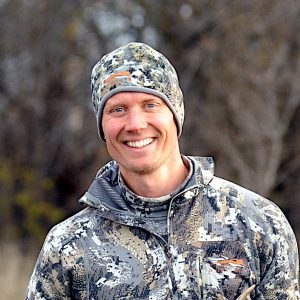 Eric Morken is a writer and photographer who lives in the lakes-rich region of west-central Minnesota. He is an avid archer whose passion lies in the mobile pursuit of whitetails. His springs are filled with chasing turkeys that often turn into scouting missions for that next fall deer season. Morken’s work has appeared in multiple publications around the Midwest in states such as Minnesota, North Dakota and South Dakota. 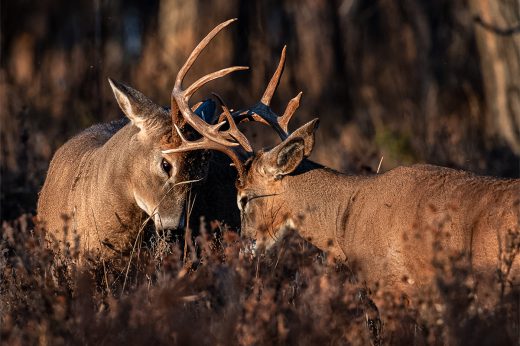 Deer Calls: Learning to Speak the Language of Whitetails