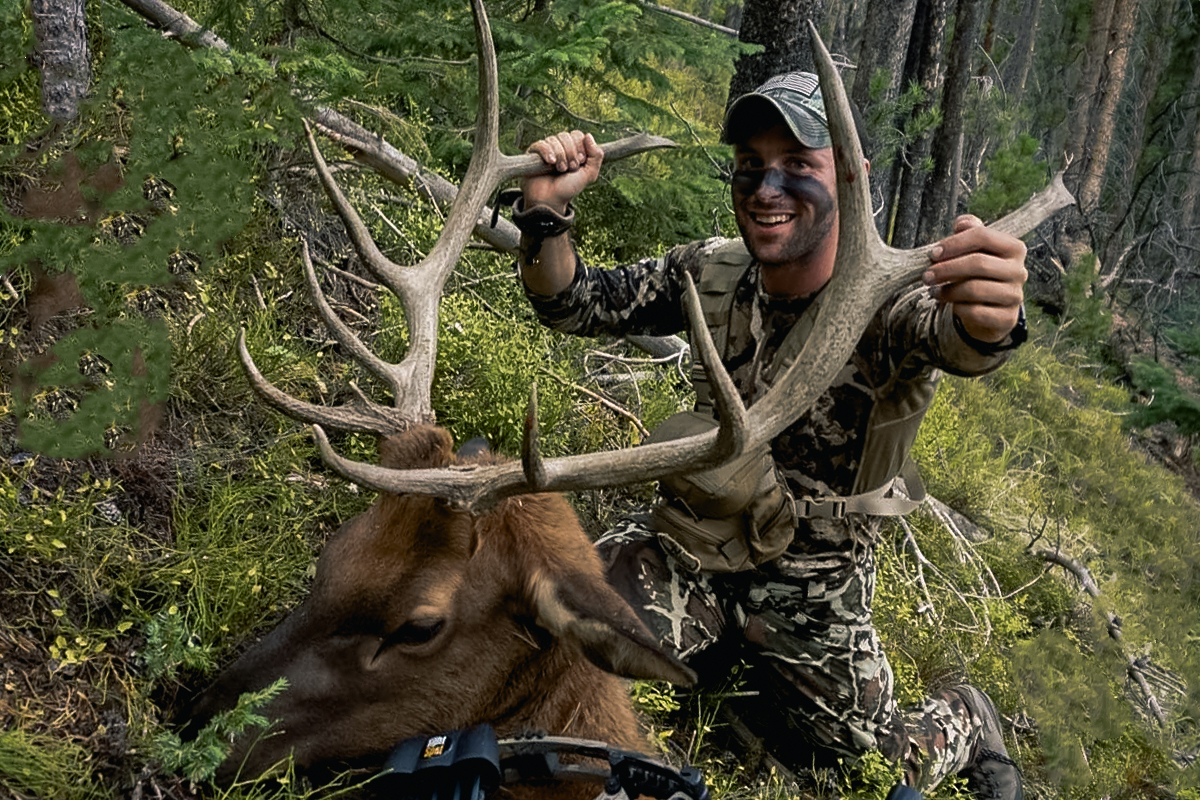 I’m a self-taught bow hunter with a passion for elk hunting. The first time I heard the bugle of a bull elk echo out of my computer speakers, I knew I had to go and experience it in person. So that’s exactly what I did.

In 2017, my first season, I made just about every mistake a new hunter could make. I still downed a bull, but it was hard fought. The next season was much different — and that success was earned by grinding it out, learning the land, and growing from my mistakes.

After two successful archery hunting seasons, people started asking me for advice. With an average 6 percent success rate in the units I hunted, how was a newbie hunter able to fill tags when more experienced hunters were eating tag soup? I attribute my success to six general rules that are adaptable and will evolve with your experience and knowledge.

This isn’t a typical “how-to” elk hunting guide — these are a collection of lessons learned in my two short yet successful archery seasons hunting elk in over-the-counter (OTC) units in Colorado.

With Colorado’s archery and muzzleloader seasons overlapping, there’s a lot more company in the mountains during the later part of the season than the start. Many hunters mark their calendar for the end of September hoping to be in the woods in the peak rut — or as close to it as they can get.

If that’s what you’re looking for, then don’t let me stop you. However, I prefer less competition in an already crowded OTC unit. Bulls tend to be in the pre-rut, or seeking phase, in the earliest part of the archery season, making them more susceptible to calling. Bachelor groups are breaking up, and they’re actively seeking cows to collect. Last year, my hunting partner and I each had a bull on the ground before September 2nd, and I called them both in using a combination of bugling and cow calls.

We have a saying in the military: “Prepare for the worst and hope for the best.” That’s how I plan my hunt when it comes to time. I plan to spend as much time in the field as work, family, and other responsibilities will allow. The last two years I was able to take two weeks off to elk hunt. That time was crucial for my first year because I called and killed my first bull in the last 10 minutes of light on the last day of the hunt. The following year we tagged out early, and I was able to save some of the vacation days that had been previously earmarked for elk season.

As with any hunting, it takes time to get to know an area and locate an animal — especially with elk. Don’t try to cram it all in — and expect to be successful — in just a couple of days.

Rule 3: Hunt During the Week

It’s no secret that hunting pressure peters out when the work week rolls in. If you followed rule No. 2 and padded your time, you should be able to get into the woods during the week. Wednesday and Thursday are my two favorite days of the week to hunt areas that are crowded on the weekends. Once the pressure is off, it seems to take the elk two or three days to move back into the area and back into their normal routine. My 2018 bull was killed less than a mile from my truck and less than 300 yards off a closed logging road — talk about an easy pack out!

Being flexible can apply to just about all hunting situations. When it comes to flexibility, I’m talking about mobility and having multiple plans. Each year when I go to Colorado, I try to start by hunting a new area. It might be in the same unit I’ve previously hunted or a different one, but I want to get eyes on new country each visit. Without the time to do preseason scouting, sometimes the new area turns out to be a dud, so I always have a back-up plan with areas where I have previously encountered elk.

Time was critical in my rookie season’s success because it allowed me to hunt my A, B, and C areas, and I got to know them well. In 2018, my plan A was a completely new area that required a 5-to-6-mile hump on foot into the core of the area. We encountered plenty of bulls, and also made plenty of rookie mistakes. In those five days, I learned the lay of the land and got a general idea of how the elk use the land and move through it. As a result of being flexible and having multiple plans over those two seasons, there are now four areas with which I am familiar for future hunts.

This should probably be named rule 4.B because being mobile aids in staying flexible. My ability and willingness to move from plan A to plan B quickly when plan A wasn’t showing any promise allowed me to become familiar with four areas that span two game management units (GMUs).

My truck is my mobile base camp, and I can hunt from it or spike out from it and stay unsupported for multiple days if necessary. Everything I need to refit my spike-out abilities is in my truck so I don’t have to leave the mountains or drive into town for supplies.

My truck is always loaded with a fly rod and waders. If it’s a hot season and I didn’t pack five miles into the backcountry, it’s a safe bet that I’ll be driving to the Colorado River in the afternoons to wet a line. In fact, it’s become a tradition to spend a day on the river fishing before packing in. There’s no better way to start the season than standing waist-deep in a clear Colorado river casting to rising fish. If you don’t have an elk down in the first week, it’s also a great way to reset and alleviate the monotony of the proverbial grind.

This article was originally published Aug. 30, 2019, on Coffee or Die.