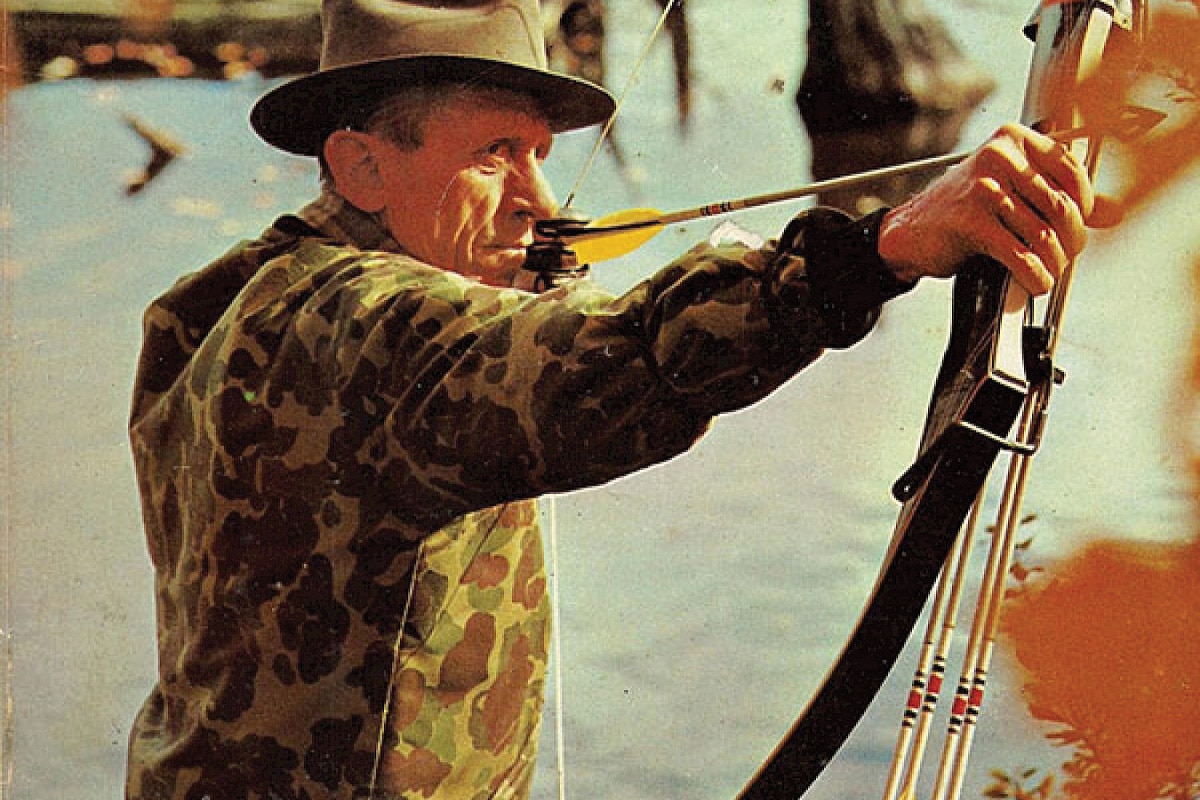 If you’re a hunter born in the last few decades, you may not know Fred Bear. The likes of Cameron Hanes, Mike “Waddy” Waddell, Steve Rinella, or Lee and Tiffany are most likely who you were brought up with.

Although understandable, it’s no excuse. No one man has done more for the sport of bowhunting than the OG, Fred Bear.

Born March 5, 1902, Bear is considered the father of modern bowhunting, but he didn’t start hunting with a bow until he was 29. It was around that time he founded Bear Archery and began making bows in his garage.

He was more than an avid hunter, the man was a tireless promoter and teacher of the sport.

Fred Bear’s World of Adventure series in the 1950s — the Kodiak Country episode specifically — was television gold; his personality, charm, and expertise earned him mainstream acclaim on The Tonight Show and The American Sportsman.

The Archery Hall of Fame inductee hunted dangerous and exotic game animals around the globe, but his true passion was whitetails.

“I hunt deer because I love the entire process; the preparation, the excitement, and sustained suspense of trying to match my woods lore against the finely honed instincts of these creatures,” he once said.

His “woods lore” was the original bar that every hunter aspired to attain — and his insights, honed from a lifetime in the deer woods, are as relevant today as they were 40 years ago.

Books and how-to articles written about bowhunting in the years since The Witchery of Archery and The Master of Game were first published could fill a couple of Vanderbilt family Adirondack lodges. But Bear managed to distill the entire canon, like a potent bottle of doe piss, to a manageable list of 10 points thou shalt follow.

The 10 Commandments of Hunting from Fred Bear

Chuck Adams, another OG iconic bowhunter and the first to achieve the North American Super Slam — harvesting one of every big-game animal on the continent — has followed Bear’s commandments for decades.

“Every one of those, in my opinion, is spot on,” Adams told Free Range American. “Those are timeless rules for hunters in general and bowhunters in particular that never change. I can’t think of one that isn’t absolutely awesome. There’s not one bullet point of those 10 [rules] that doesn’t apply as well today as when Fred Bear was active in the ’50s and ’60s.”

Remi Warren, a highly respected and accomplished hunter, guide, and media personality, told Free Range American that the list is still the basic core of what hunters like him work from.

“It’s definitely held up,” Warren said. “They’re the same basic principles people have been using forever: be quiet, don’t be seen, and hit what you’re shooting at.”

“He talks about camouflage and says sit down and be quiet, but I think it’s more than that now,” he continued. “The game is: don’t be spotted. Sitting still isn’t the only way to do that. You can definitely move around, block the eyes of the animal and be a little aggressive at times, too.”

That’s the beauty of Bear’s commandments — they’re universal. There will always be variables no matter what you hunt, but each point he made was a foothold for adaptation.

As the hard-rocking Ted Nugent sang in his song “Fred Bear”:

We’re not alone when we’re in the great outdoors.
We got his spirit. We’ve got his soul.
He will guide our steps.
He’ll guide our arrows home.

READ NEXT – Ishi, Pope, and Young: The History of Modern Bowhunting