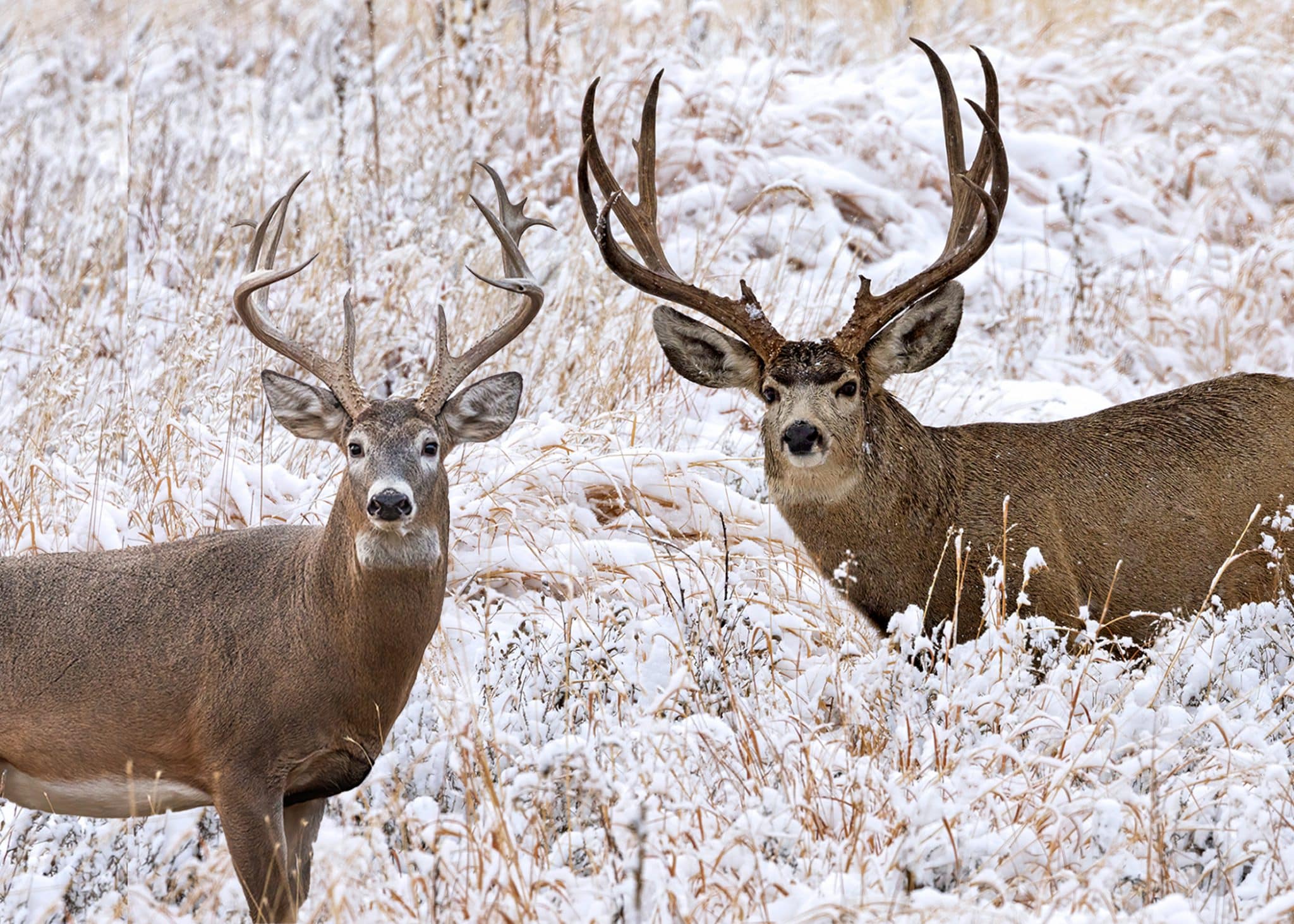 Hunters often say they prefer one species of deer over another, but for most, the reason for their preference is simply based on where they live. It’s not so much a mule deer vs whitetail deer debate or choice. It’s about what species to which hunters in a given place have the best (and most affordable) access. In Alabama, hunters tend to have a love affair with whitetail deer because more than 1.8 million of them live there. The state’s current mule deer population is zero.

As you travel west of the Missouri River, things begin to change. You won’t find many Utah or Nevada hunters chasing whitetails when those states produce multiple Pope and Young and Boone and Crockett muleys each fall.

There are, however, states I’ve dubbed “tweener” states, mainly due to the extreme adaptability of the whitetails there — enter Colorado, Wyoming, Texas, Montana, Nebraska, and the Dakotas. They harbor both mule deer and whitetail populations, and hunters who live in or travel to these hunting destinations find a deer buffet.

Still, whitetails heavily outnumber the mule deer in the U.S. While population data is never exact, current estimates put the country’s whitetail population at over 30 million animals. And although mule deer populations are recovering well in many Western states thanks to improved management practices, fewer than 4 million are in the whole country.

Whitetail deer and mule deer are different creatures; they look different and have distinctive habits. Regardless of which species you’re hunting, there are some things to unravel before you hit the ground running.

While these cousin animals have similar features, the quickest way to tell a mule deer from a whitetail deer is to look at the ears. Mule deer get their name from their big, mule-like ears. There is no mistaking these massive hearing aids; they’re almost double the size of a whitetail’s ears.

You can find another telltale whitetail vs mule deer sign in the face. Mule deer bucks, especially older ones, tend to have much more white on their face than whitetail bucks. In addition to the white, mule deer bucks tend to have a dark (almost black) forehead. The face of a whitetail deer will be primarily brown — the same color as its body — with white circles around the eyes and nose.

While the rump of a whitetail deer is tannish/brown (reddish/brown in spring/summer) like the rest of the body and the underside of the tail is white, mule deer have a circular white rump patch with a black-stained tip on a white tail.

I’ve seen mule deer with what I’d refer to as very “whitetail-ish looking” headgear, and vice versa. The antlers of both deer can be colored the same, and both can be wide, narrow, tall, short, heavy, and skinny. The telling factor, especially with mule deer, is brow tines (G1), which are typically very short. Another common trait most mule deer bucks share is the G2, the next piece of antler coming off the frame after the G1, which tends to be forked. Mule deer lean toward wider frames than whitetails, but both can be extremely heavy.

Regarding body size, especially with whitetail deer, it varies greatly depending on where in the country you’re hunting. I’ve killed whitetail bucks in Nebraska and Kansas that pushed the scale over the 250-pound mark; I’ve also harvested whitetail in Florida and Texas that sported solid headgear but didn’t break 160 pounds.

Western mule deer have bigger bodies than whitetail deer, but don’t let body size be the determining factor if your wallet holds a tag for one species or the other. Both can be very big.

Mule deer will also frequent green fields like alfalfa if it’s available. However, if you’re hunting mountain mule deer and the nearest agricultural area isn’t even in the same county, focus on grasses and forbs like mountain bluebell, sawtooth butterweed, clover, and others.

Like mule deer, whitetails are browsers. Though grain and green plots are their primary go-to food sources, they also focus heavily on white and red acorns (white acorns are their favorite), ragweed, white cedar, Oldfield aster, and blackberries.

RELATED – A Big Buck Expert on Deer Hunting in the Rain

When chasing mule deer (Odocoileus hemionus), the primary method is spot-and-stalk hunting with a rifle, muzzleloader, or bow. Traditionally, mule deer inhabit more open ground like mountain basins and vast sage flats, making it easier to sneak up on them.

Your best bet for success when spotting and stalking mule deer is to gain an elevated vantage point and put your optics to work. A quality pair of 10x to 12x binos is best, and if you’re seeking an actual trophy, you’ll want a spotting scope, too.

Put your optics to work, and once you’ve found a buck to go after, plan your approach carefully. I prefer to mark my current position and the position of the buck on a digital mapping app like HuntStand, which provides an excellent visual reference to use during your stalk. You will also need to find and photograph those landmarks on your smartphone. These landmarks should be between you and your target animal, and if you can string together a few of them, you can keep track of how close you’re getting to your quarry as the stalk goes on.

During the early season, chances are good you’ll be stalking a bedded buck or bucks as mule deer like to form early-season bachelor herds. During the rut, which is on fire during November’s final two weeks, you’ll likely be stalking an on-the-move buck trying to keep his harem of girls together. Mule deer don’t pursue and pin down a single doe like a whitetail. Instead, they are more like elk and gather a harem of girls to breed. There will be other satellite bucks around, and you’ll need to keep this in mind during your approach.

The most common method for hunting whitetails, whether using a firearm or bow, is to sit and wait. For years, hunters have been hanging tree stands, erecting shooting houses, and tucking into ground blinds across North America’s best whitetail dirt — and succeeding.

During the early season, find quality food sources, natural vegetation, or planted crops, and get in tight. Bucks won’t travel far from food to bed, so keep the wind in your favor and have a good entrance and exit strategy.

During late October, the testosterone level of bucks starts rising. Their home ranges get bigger, and they spend more time on their feet, especially before or after a cold front. If the moon rises in the afternoon and the barometric pressure climbs, all the better.

If you find yourself in the whitetail woods in November, don’t leave. Action can ebb and flow throughout the day. Bucks are on their feet looking to find an estrous doe, and once they find a willing girlfriend, they will lock down with that lady for an extended period before resuming the search for another mate. You never know when a lovesick buck will wander past in range.

During the late season, deer refocus on food sources after a hard rut. Bucks are biologically expendable and know they must pack on the calories if they plan to survive the brutal winter months ahead. If you know of some cut grain fields and have access to those fields, spend some hours doing hands-on scouting and learn when and where to strike.

The greater your understanding of the deer you’re hunting, the more successful you’ll be, and if you’re hunting in one of those “tweener” areas and your tag can be hung on a mule deer or whitetail, you need to master the 411 on both.