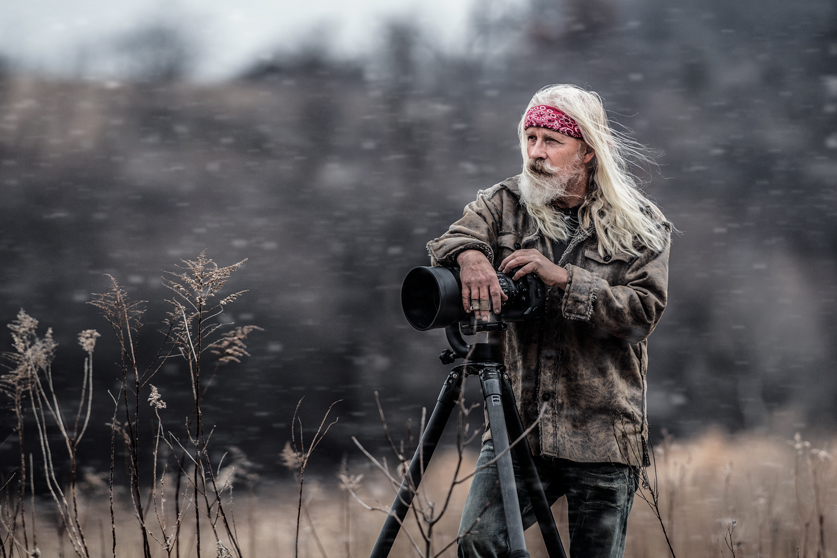 “Way back when I was a 20-year-old snot-nosed kid, I could have photographed the Allman Brothers. […] But an early cold front sent a wad of mallards south from Saskatchewan the morning prior.

“Had plans to shoot Willie Nelson at the Saint Cloud Civic Center in November of ’97. Piled-up North Dakota greenheads got in the way.

“Coulda shot Jason Isbell at the Varsity Theater in 2013 when I was a lot older and wiser but still completely nuts for feet-down mallards. You can probably guess how that deal went down.” — Lee Kjos, Facebook post excerpt

Lee Kjos is not a duck hunting fanatic. That would do his lifelong love for the waterfowl a disservice. He has shit weather, windshield time, calling birds, and gunsmoke in his blood. It’s what he’s known since his boyhood days knocking down ducks in Saskatchewan with his dad. It’s the foundation for his photography and his wildly successful career of building brands for some of the most renowned outdoor companies on the planet. And it’s a gift that he could not fathom ever taking for granted.

Considered the godfather of outdoor and wildlife photography, Kjos still calls his beloved Minnesota home, spending as much time on the water and in standing timber as possible and growing the BOSS Shotshells brand, of which he’s a partner owner. Free Range American caught up with the man and talked about slab crappies, king eider on St. Paul Island, the importance of photography, and the futility of retirement.

FRA: Were you able to get out for any hunts last year?

LK: I’m a big like prairie guy when it comes to duck hunting and bird hunting, right? Well, with Canada being shut down with COVID, that took Saskatchewan out of play for me. That’s the first time I haven’t been to Saskatchewan since 1975. I didn’t draw a South Dakota nonresident tag either. So the early part of my season was really odd for me. Really strange. A buddy of mine and another buddy went down to his place in eastern Kansas, and we had just fantastic bluewing teal hunting early on the opener.

Then I came back to northern Minnesota, up in the Marcell, Bigfork area, where I grew up. Bonnie [Kjos’ wife] and I have an island up there on Turtle Lake and I grew up hunting ruffed grouse and stuff up here. Well, I hunted ruffed grouse quite a bit. Then some fall fishing. Later in the year, I started to hunt Nebraska and Arkansas, and Missouri. Duck hunting. That was really fun. It was just an odd year with COVID, you know.

FRA: You just got back from fishing on the island, yeah? How was that?

LK: So, well, damn, I wish you were with me yesterday. It was one of those rare days you have as a sportsman. It’s still cold in northern Minnesota. So it’s pre-spawn crappies, right? They’re not in spawning yet, but they’re just off it. They go by water temperatures so close that if the water temperature warms up even a couple degrees, they’ll move in, and then it’ll cool off and they’ll back right out. Right. Well, we found them yesterday for about a two-hour period, and it was unreal. One and one on top of another and they were huge. Then it clouded up and it got cool and they completely shut off. Just one of those days where you just get lucky, you know?

FRA: What’s one of your favorite fishing trips?

LK: My dad used to guide the Boundary Waters. I would say like 1968, ’69, ’70. Somewhere in there. I spent one summer on an island in the Boundary Waters. I portaged with Dad and the guys, you know, and we’d go into East and West Pike and John and Crystal and Pine lakes that whole summer and fish. I had my dad’s Minolta rangefinder and I would photograph, trying to document everything. Those were my formative years.

FRA: What’s your most memorable or favorite hunting trip?

LK: The first time my dad took me to Saskatchewan in 1974. Alsask. Right out by the Alberta border. It changed my life. Ducks, little geese. What I mean by little geese is lesser Canadas and specklebellies, and then we hunted a lot of sharp-tail and Hungarian partridge back in those days. We’d go for like three weeks at a time and camp on the South Saskatchewan River. We’d stay in a tent. Good times.

FRA: You said your dad was a guide?

LK: Well, he was really a union electrician. He traveled a lot to big jobs that were around the country. But when it came to duck hunting, I think he quit his job. I think that’s what he would do and then just go hunt ducks everywhere you know, then pick his job back up when duck season was over.

FRA: So you come by your vocation and avocation honestly.

LK: Oh, yeah, for sure. I mean, it’s like when people say the lines can be blurred between one or the other. For me, they’re one and the same. I treat my photography in the outdoor world just like I treat hunting. It’s all the same thing to me.

FRA: What role do you think photography plays in conservation or protecting the resource?

LK: You know, I think photographers are preservationists at heart, right? By nature. I think we are. I always wanted to capture that. What’s real. I would do anything to help any of the 501(c)(3)s that are out there. Ducks Unlimited and Delta Waterfowl, Pheasants Forever and Quail Forever, Ruffed Grouse Society, even Trout Unlimited. I’d like to think my photography has helped, maybe, reach a younger generation. I hope it’s been some kind of good influence on people.

FRA: So, tell me about St. Paul Island and the king eider.

LK: When I was a little kid, I had this book called Ducks, Geese and Swans of North America, and I could never get by the eider page. Just not only their beauty, and that was for spectacled and Steller’s and king and common and Pacific, all of them. But for some reason the king eider just, I don’t know, would just flip me out even as a little kid, and I’d look at the map on where they were from and all that.

Well, I always wanted to go hunting eiders, and when I got a little bit older, the only place I could go do it was on St. Paul Island. So I planned a trip up there with a bunch of buddies and had an absolute blast doing it. A few years later, Benelli was launching the Super Black Eagle 3. I’d done Benelli’s marketing and photography for years and they asked me where would be a killer spot to do a gun launch on the SB3. And I’m like, well, I’d go to the rock. I’d go to St. Paul because it’s so outrageous, you know? I think we lost four cameras on that shoot — it’s so nasty. Just unbelievable wind and salt. Blown off and, I mean, days where you can’t get out. Oh, it’s nasty. Fun though. Really fun.

LK: I’m gonna be 61 here in a couple days. I’ve had a successful career. Bonnie and I have a really cool farm down in southern Minnesota, but we have this island up here in northern Minnesota where we grew up and met each other and it’s really, really cool.

If somebody asks “when are you going to retire?” I say, think about what you’re asking me to retire from. I’m not that guy, dude. I love what I do. I make art. I’m around a bunch of really cool outdoor people. I hunt, I fish. I don’t know, man. It’s pretty good.

Retirement scares the hell out of me. I don’t know what I’d do if I didn’t work. So I’m going to work as long as I can or as long as somebody wants me. But I’m only going to work for people I want to work with, that I like. I’m going to continue to grow BOSS Shotshells until the time when me and the old lady just sit on the island and chill.

Read Next: This Hunter Did a DIY Public Land .410 Turkey Slam in the First 2 Weeks of Turkey Season