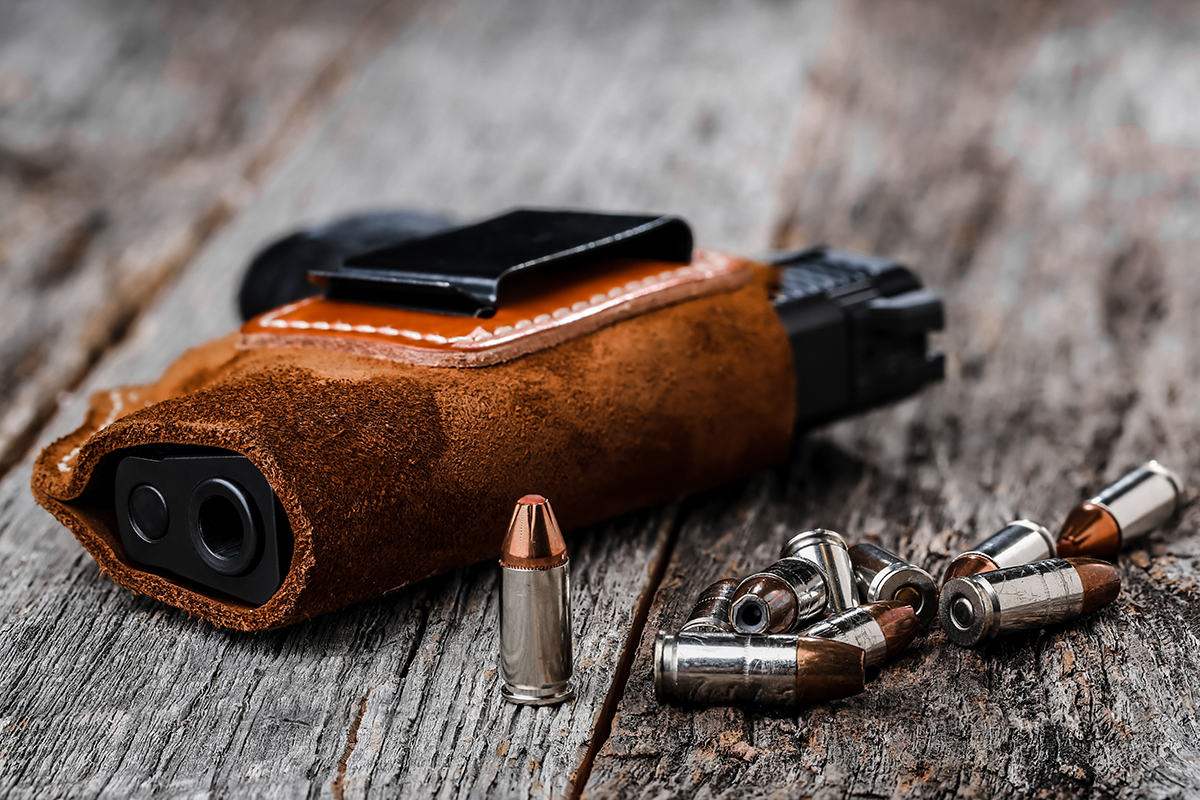 The US Supreme Court has released a much-anticipated decision in the New York State Rifle & Pistol Assoc. v. Bruen case that says Americans generally have a right to carry a  handgun outside their home for self-defense. The ruling strikes down New York’s carry permitting law that requires residents to demonstrate a special need to defend themselves, saying it’s too restrictive under the Second and Fourteenth Amendments.

This expansion of what the Second Amendment protects will mean big changes for state-level gun laws across the nation.

“This is a tremendous victory for the rights of all law-abiding Americans to exercise the pre-existing and God-given right to keep and bear arms for self-defense,” said Lawrence G. Keane, National Shooting Sports Foundation (NSSF) senior vice president and general counsel in a statement. “This establishes that ‘may issue’ permitting schemes that relegate the Second Amendment to a second-class right that can be meted out by government bureaucrats are unconstitutional.”

The 6-3 ruling is the most significant gun-rights decision to come from the court in more than a decade, and striking down the New York’s 100-year-old restriction will impact similar restrictions elsewhere and spur big changes in states with the strictest gun laws like California, New Jersey, Maryland, Hawaii, and Massachusetts — but the impact could be far greater than that.

These “may-issue” states have long used the “special need” requirement, or something similar, as a mechanism to arbitrarily deny carry permits to otherwise eligible, legal gun owners. And it appears that mechanism is about to go bye-bye and effectively turn them into “shall-issue” states.

Despite the fact that the right to carry firearms in public has been restricted in the US throughout history, the majority decision, written by Justice Clarence Thomas, explained that there exists no tradition of broad prohibition on carrying commonly used weapons in public for self-defense.

“The Court concludes that respondents have not met their burden to identify an American tradition justifying New York’s proper-cause requirement,” Thomas wrote in the decision. “American governments simply have not broadly prohibited the public carry of commonly used firearms for personal defense. Nor have they generally required law-abiding, responsible citizens to ‘demonstrate a special need for self-protection distinguishable from that of the general community’ to carry arms in public.”

“The constitutional right to bear arms in public for self-defense is not ‘a second-class right, subject to an entirely different body of rules than the other Bill of Rights guarantees.’ The exercise of other constitutional rights does not require individuals to demonstrate to government officers some special need,” Thomas continued. “The Second Amendment right to carry arms in public for self-defense is no different. New York’s proper-cause requirement violates the Fourteenth Amendment by preventing law-abiding citizens with ordinary self-defense needs from exercising their right to keep and bear arms in public.”

The decision comes just as the US Senate is fast-tracking a large bipartisan gun control bill, the “Bipartisan Safer Communities Act.” The bill’s text was just released Tuesday, June 21, and a vote on the Senate floor is expected before the week is out.

When first introduced, among other measures, the bill included requirements for more in-depth background checks for gun buyers between 18 and 21 years of age that delve into juvenile and mental health records. Since then, Sen. Diane Feinstein (D-CA) has already filed an amendment to the bill that would top that provision and raise the minimum age to purchase most semi-automatic firearms and standard capacity magazines from 18 to 21. The bill also includes funding for red flag initiatives and other measures, but it does not include an assault weapons ban or a magazine ban. It’s unclear if aspects of this legislation will be impacted by the SCOTUS ruling.

In the decision, Thomas writes that the Heller and McDonald decisions point toward two relevant metrics for determining Second Amendment questions in a modern context: “whether modern and historical regulations impost a comparable burden on the right of armed self-defense, and whether that regulatory burden is comparably justified.”

“Because ‘individual self-defense is ‘the central component’ of the Second Amendment right,’ these two metrics are ‘‘central” considerations when engaging in an analogical inquiry,” Thomas writes.

While this point is mired in some deep legalese, Keane says it’s of equal importance to the expansion of self-defense rights outside the home and means a lot for the future of gun rights in the US.

“Of equal importance is the fact that the US Supreme Court has set forth the correct test for evaluating whether a law infringes upon the Second Amendment,” Keane said. “The court rejected the ‘means-ends’ (interest weighing analysis) test adopted by the lower courts since Heller and McDonald. This ‘means-ends’ test is based on retiring Justice Breyer’s dissent in Heller that was expressly rejected by the court in Heller itself. The court also made clear today that intermediate scrutiny is not appropriate and that the proper test is to look at the text, history, and national tradition at the time of the founding as to whether a restriction violates the Second Amendment.”

So how will this all play out? Slowly and via a whole bunch of lawsuits.

Now that the SCOTUS ruling has been handed down, suits are expected to be filed, challenging other gun laws across the US.

“We’re in for a whole new slew of litigation challenging any and every gun-control measure in light of the analysis in today’s ruling,” said Steve Vladeck, professor at the University of Texas School of Law, in a story from CNN. He also said the court’s decision will affect more than just permitting laws in may-issue states.

“The majority’s expansion of what the Second Amendment protects will have monumental ramifications far beyond carrying firearms in public — on everything from age restrictions to assault weapons bans to limits on high-capacity magazines,” Vladeck said.

But leaders in anti-gun states have already said they plan to put up a fight.

She went on to say that the state is “closely reviewing our options — including calling a special session of the legislature.”

Gov. Phil Murphy of New Jersey was also not pleased with the court’s decision and vowed his state government would do everything it can to defy the SCOTUS ruling however possible and prevent law-abiding gun owners from defending themselves.

“Based on a deeply flawed constitutional methodology, a right-wing majority on the United States Supreme Court has just said that states can no longer decide for ourselves how best to limit the proliferation of firearms in the public sphere. Let there be no mistake – this dangerous decision will make America a less safe country,” Murphy said in a release.

“Anticipating this decision, my Administration has been closely reviewing options we believe are still available to us regarding who can carry concealed weapons and where they can carry them,” Murphy continued. “We are carefully reviewing the court’s language and will work to ensure that our gun safety laws are as strong as possible while remaining consistent with this tragic ruling.”

But there are plenty who are thrilled with the decision and see it as a long-awaited resolution to inequality.

The Legal Aid Society said in a statement that the decision is a step “toward ending arbitrary licensing standards” that have “inhibited Black and brown gun ownership in New York,” according to CNN.

“New York’s gun licensing regulations have been arbitrarily and discriminatorily applied, disproportionately ensnaring the people we represent, the majority of whom are from communities of color, in the criminal legal system,” the nonprofit added. “As lawmakers consider next steps in response to this decision, let us be abundantly clear: it would amount to a historic disservice to both public safety and the best interests of the New Yorkers for Albany to reproduce a regulatory scheme that perpetuates the same disparate outcomes yielded under the previous law or to further criminalize gun ownership.

“Criminalization has never prevented violence and serves only to further marginalize and incarcerate people from BIPOC (Black, Indigenous, and people of color) communities.”

The Firearms Policy Coalition called the opinion a monumental step forward for “natural rights and individual liberty” in a statement and promised a bevy of lawsuit filings on the horizon.

“Bruen is a major win for the People and for the liberties our Constitution was designed to protect,” said Joseph Greenlee, FPC Law’s director of constitutional studies, in a statement. “Not only did the Court confirm that peaceable people have the right to armed defense outside the home, but it denounced the ‘interest-balancing’ test that lower courts have used to justify dozens of unconstitutional laws over the last decade.”

“Today’s decision will allow FPC Law to press our current cases and to challenge many laws that were upheld in prior cases, potentially allowing many of the freedoms lost to be restored in the years to come,” he added.

“FPC Law will soon be filing many more important strategic lawsuits, adding to our dozens of active cases across the United States on key issues from restrictions on the right to carry in public to bans on self-manufacturing firearms and so-called ‘assault weapons’ and ‘large-capacity’ magazines,” said Brandon Combs, FPC founder, and president, in the statement.

“We know that authoritarian governments and officials will do everything they can to circumvent the Constitution and attack the human right to keep and bear arms, but we will punch back twice as hard,” he added.

Despite the zeal of gun rights proponents, the ruling may not have as far-reaching of an impact as they hope. In an opinion joined by Chief Justice John Roberts, Justice Brett Kavanaugh said the ruling “will not bar states from imposing licensing requirements,” according to SCOTUSBlog.com and that other restrictions on permitting and gun ownership are not the same as New York’s special need requirement.

“There are 43 states […] that use licensing schemes that include requirements such as background checks, firearms training, a check of mental health records, and fingerprinting. Such schemes are objective, Kavanaugh explained, rather than granting ‘open-ended discretion to licensing officials’ and requiring ‘a showing of some special need apart from self-defense.’”