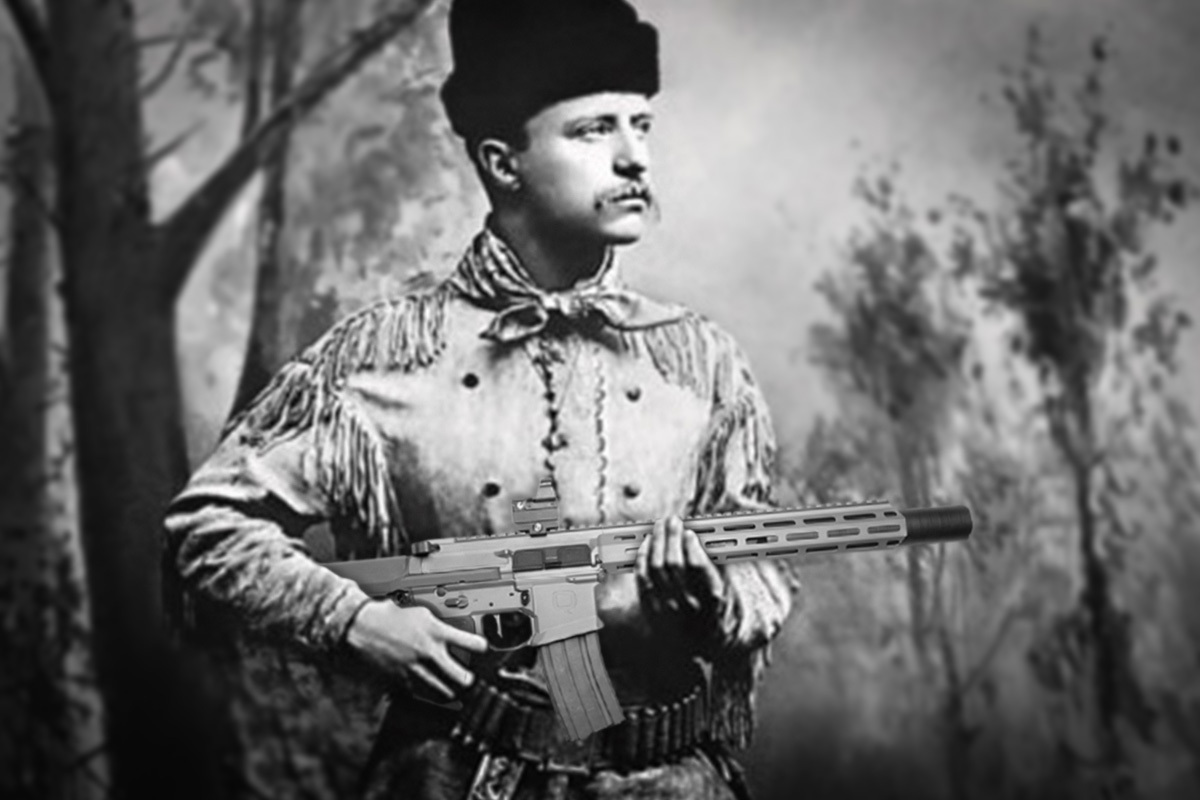 The 26th President of the United States, Theodore Roosevelt, liked guns, and he liked to shoot. He famously quipped: “I don’t know how to shoot well, but I know how to shoot often.” The architect of the North American Model of Wildlife Conservation had an arsenal to match his enthusiasm.

Roosevelt owned many revolvers, pistols, rifles, and shotguns over the course of his lifetime. He owned at least 20 Winchester lever-action rifles, but perhaps the most unique rifle for his day was a threaded Model 1894 fitted with an early Maxim Silencer. It was one of three known suppressed Winchesters in Roosevelt’s collection.

The Maxim Silencer was the first-ever commercially viable suppressor, developed by Hiram Percy Maxim, son of the inventor of the Maxim Machine Gun. (Maxim went on to use the technology he developed in other devices, like car mufflers.) The Silencer was patented on March 30, 1909, making it an absolute state-of-the-art piece of equipment for Roosevelt to take on safari in April 1909.

Roosevelt understood the benefits of hunting suppressed. He had two Maxims on his packing list for his famous African safari. One was fitted for a Springfield Model 1903 bolt-action rifle in .30-06 and another for a Winchester Model 1895 in .405 Winchester, the rifle and cartridge combo Roosevelt called his “Big Medicine.”

It was likely the first time any sound-suppressed firearms were used in Africa or on any multi-week hunting trip.

The Maxim Silencer for the M1903 retailed for $8.50 at the time, which is around $250 in 2021 dollars. The Silencer for the .405 was probably specially made for the president, as that caliber was not listed as an option in the Maxim catalog at that time.

Roosevelt killed hundreds of big game animals on the safari, including 20 zebras, 13 rhinos, nine lions, eight elephants, and seven hippos. That’s a lot of shooting. His .405 Winchester loads were topped with a 300-grain bullet fired with a sizzling muzzle velocity of 2,230 fps; hence the nickname TR bestowed upon it.

After his death in 1919, Roosevelt’s family kept some guns from his collection and sold others. The ones the family kept ended up part of the museum collection at Sagamore Hill when it became a National Historic Site administered by the National Park Service. (A fitting home as TR reportedly most liked the suppressors for shooting at home without disturbing his Long Island neighbors.) Among the guns in the museum is his threaded Winchester Model 1894, complete with its Maxim Silencer.

Like so many of his wildlife conservation policies, TRs gun collection was well ahead of his time.

Read Next: The Death of Big Jake, the World’s Tallest Horse