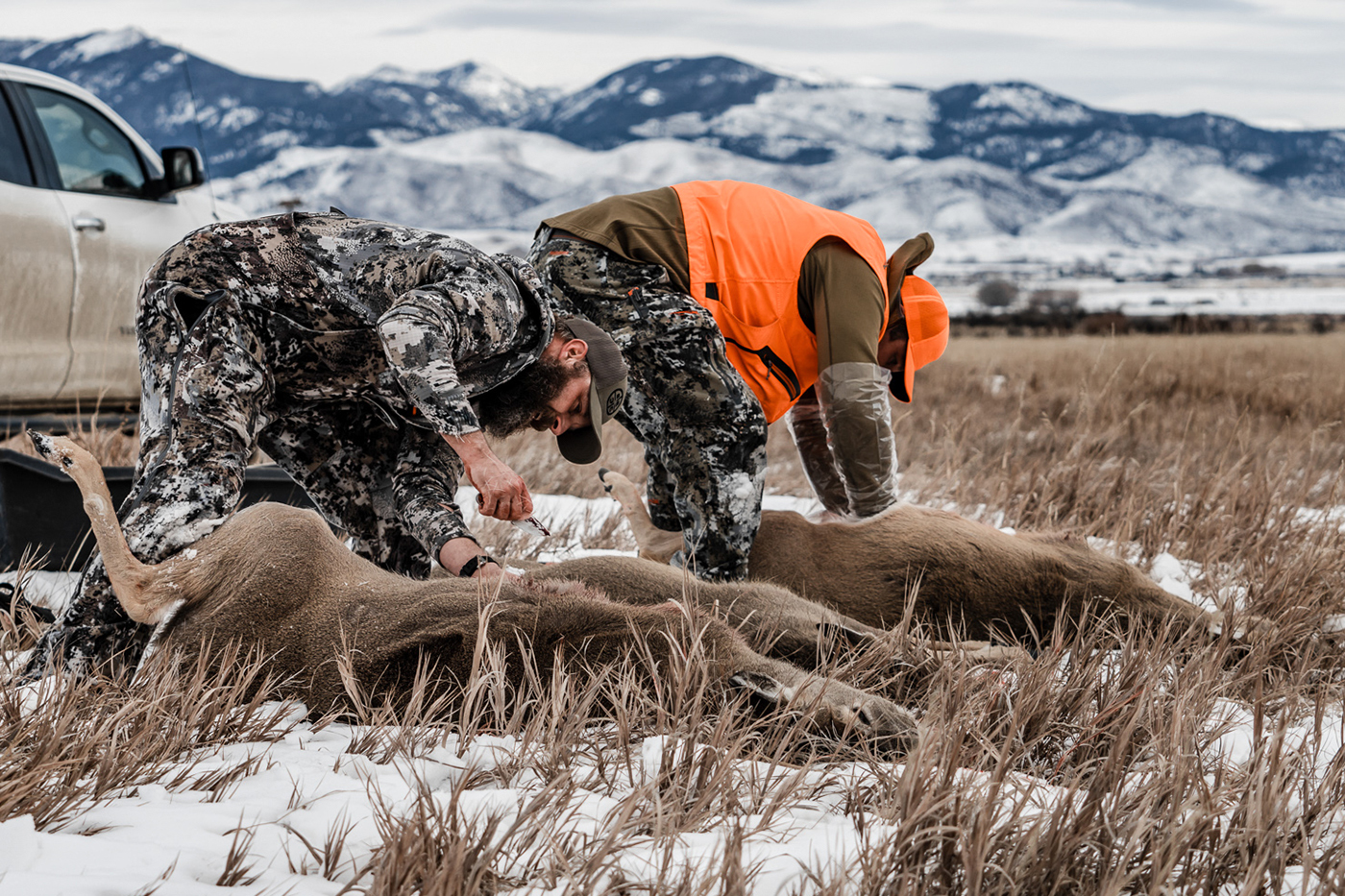 Before we get started, allow me to preempt any comments about how I don’t know what I’m doing by saying there’s more than one way to skin a cat (or in this case field dressing a deer). The method I describe here is one of many ways you can field dress an animal. It works, but as you get more accustomed to doing it yourself you’ll likely pick up tricks and shortcuts that you prefer and that’s totally fine.

Regardless of the way you’re getting it done, your goal should be to get the meat separated from the digestive organs, cooled down quickly, and ready for transport.

So You Bagged A Deer, Now What?

So, all your patience and hiking have paid off and you’ve killed that nice buck you’ve been after for the last few days. The hard work is finished, right? Wrong. Any hunter worth his salt knows the work it takes to find, stalk, and shoot a deer pales in comparison to the work it takes to get that precious meat off the mountain. Go ahead and enjoy your moment, even take a few pictures with your trophy and high-five your hunting buddies, but know that there isn’t much time to waste.

As soon as you kill an animal a clock starts ticking. The body can no longer keep the millions of normally healthy bacteria in its intestines in check and they begin to feed and reproduce out of control. Before too long, the guts will bloat and the gutting process will become infinitely more difficult. How fast that happens depends mainly on how hot it is outside. No matter the temperature, there’s a finite amount of time until the meat spoils, so you need to act quickly.

If it’s below freezing or you’re running out of daylight, skip this step. Otherwise, you’re going to want to maximize the amount of time you have by dragging the animal into a shaded area. If you can, position the animal on a slope with the tail on the lower end to help the blood drain.

Start cutting the skin next to the genitals toward the anus. There’s a pelvic bone underneath the scrotum that you’re going to end up cutting down on both sides so pick a side and work your way in there a couple inches deep. Be careful not to nick the urinary tract or bladder because urine will leak out. As you make your way south, your goal is to free the colon from the surrounding flesh without puncturing it.

To do this you’ll need to cut all the way around it at roughly 3 inches deep. It’s slippery, but when you’re done you should be able to grab it with your fingers and wiggle it around to see that its free of the tissue that usually holds it in place. From there, Cut up to the pelvic bone on the other side and follow it down so the hams (the meat of the animals thighs) are separated from it.

Step 3: Open Up The Intestinal Cavity

The guts sit in a sheath of abdominal muscle you’re going to have to cut through. You can cut away the skin along the belly first to make this process easier. Any time you’re cutting through an animal’s pelt you want to cut outward, meaning your blade should face up and away from the animal. This serves two purposes. For one, it minimizes your chances of cutting too deeply, penetrating the digestive organs, and leaking poop and bile onto your meat. Secondly, the blade slides through the animal’s fur as opposed to cutting it into little fragments that get everywhere and are difficult to clean off.

The best way to perform this with a knife is to put two fingers spread apart as if you’re making a peace sign under the skin and lifting it away from the animal, then take your knife in between your fingers blade side up, and cut away from the guts as you slide up the length of the belly to the breast bone or opposite direction from sternum to pelvis. The same technique can be used for the skin and abdominal muscle wall.

Next, I prefer to saw through the breast bone. You can gut an animal without sawing the breastplate, but it’s much easier to see what you’re doing with it out of the way and it’s not difficult to get through. For this, you’ll need a hand-held saw. Nothing special or big, the tiny saw on a Leatherman will work.

Once you’re past the diaphragm up by the chest cavity you don’t need to be as worried about cutting too deeply, since fluid from the heart and lungs won’t ruin the meat. Put your saw in headfirst and saw upwards in a single direction ripping motion. Once you’ve sawed up by the trachea just pull the ribs open as wide as you can.

Step 5: Free Up The Guts

The diaphragm is the muscle responsible for breathing, it is a thin sheet of muscle that separates the digestive organs from the upper chest cavity. The muscle runs perpendicular to the spine and attaches to the ribs on all sides. To remove the entrails, you’ll need to cut around the entire circumference of the diaphragm. This is easy towards the front of the animal, but more difficult as you get towards the spine.

You’d need to dig your hands around and under the guts to feel where the diaphragm is and cut it carefully so as not to puncture any digestive organs or nick the animal’s tenderloins which sit along the spine about three quarters down toward the tail.

Once you’ve freed up the diaphragm all that remains is to cut the trachea and adjacent arteries and the organs are free of any connection to the meat or skeleton. At this point, remove any organs you intend to eat. The liver is edible (not my favorite), and the heart is sublime so don’t let it go to waste.

Step 6: Scoop Out Those Innards

If you’ve done everything properly to this point, the organs should be sitting in the animal like a bowl of spaghetti and meatballs. Have your buddy lift the front end of the deer up and use your hands to scoop the organs out. Keep your knife handy to cut free any parts of the diaphragm or colon you missed.

If you make a mistake while field dressing a deer and nick anything that leaks urine, bile, or anything else nasty on your meat, do your best to rinse it off immediately. If you’re quick on the draw you should be able to salvage most of it.

Step 7: Prepare For The Dear For Transport

Depending on how far you are from your vehicle you need to decide whether you’re going to quarter the animal and pack him out or drag him out whole. You get much more grind meat in the end if you drag out the entire animal. But a big deer can weigh well over 200 lbs, and that’s a lot of dead weight to drag any kind of distance so plan accordingly.

This article was originally posted by Skillset magazine in February 2022.