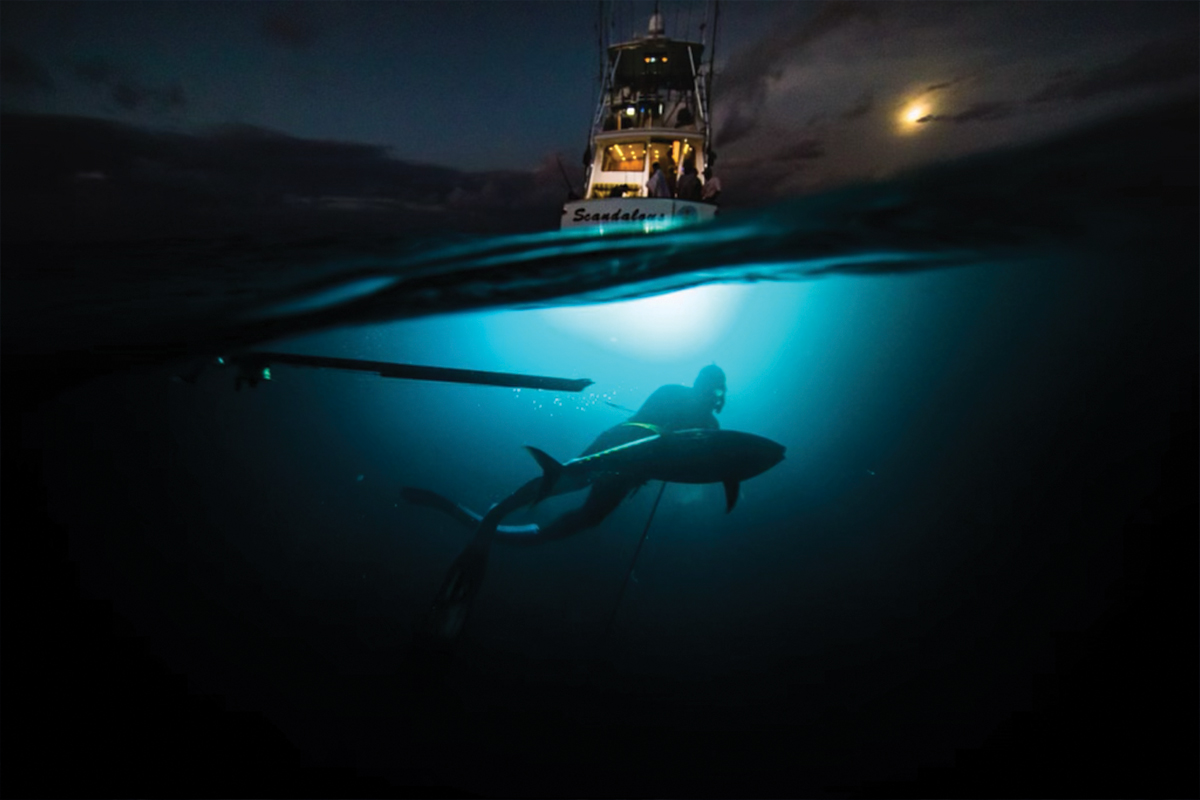 You’ve heard the saying “like shooting fish in a barrel.” When Hawaiian spearfisherman Justin Lee dove into Lake Powell for the National Spearfishing Championship held the last two days of April, fish in a barrel might’ve actually had a better chance of survival.

Lee came from behind to claim the national free-dive spearfishing title — killing 82 fish over the two-day event, including a tournament-best 20.4-pound carp. The title validates the years of work he’s put into the sport, but it also celebrates his hometown’s way of life.

Free Range American caught up with Lee, who has been spearfishing competitively since 2014, about the tournament, what the title means to him, why he hunts, and what being a role model means to him.

“I followed my dad into the water when I was like 10 years old, 28 years ago now,” Lee said. “That’s as long as I’ve been archery hunting, too. They’re kind of the same: archery hunting and spearfishing. They just went hand in hand, and I just fell in love with them.”

Spearfishing’s 68 best from across the country launched from Lake Powell’s Wahweap Marina in Page, Arizona, on the hunt for the national title.

The event was a qualifier for both saltwater and freshwater world championships in 2023.

The first day of the competition was for gamefish only — specifically walleye, catfish, and stripers. Competitors had an eight-fish limit each for walleye and catfish and no limit on the number of stripers they could kill. Each fish was worth 3 points.

At the end of day one, Lee found himself almost 30 points off of the leader’s score.

Day two was an entirely different story, and Lee put up a total that edged out the leader.

The competitors were targeting carp and stripers only, and shooters could take as many as they could spear, with carp worth one point and stripers worth three.

An interesting conservation side-note: Carp are an invasive species in Lake Powell, so the competitors were actually doing the Utah Department of Wildlife Resources a solid by blasting the shit out of them.

According to the math, day two’s efforts earned the leader 65 total percentage points to Lee’s 100. That meant Lee’s two-day total of 171 points (from 177 total drops or dives) was enough to claim that elusive top spot.

“It was just a crazy, crazy event,” he said. “I’m just so happy that it fell my way finally. I’ve been competing in them since 2014, and every year since 2014, I’ve placed in the top five. I’ve had a couple of second-place finishes, and my team has never placed outside of the top three. So I’ve always been the bridesmaid, never the bride.”

Not this time, though.

“As sweet as my victory was, you know, this local guy, it’s his home lake, and I edged him out. As great as it feels, you also feel kind of bad that you took away a championship.” Lee added with a laugh, “In the same breath, you’re like, ‘Fuck that!’”

“It’s been an epic, epic week,” Lee added. “I’m just so happy the cookie crumbled in my direction this past weekend. I’m still floating on cloud nine gazillion.”

Lee was also awarded Athlete of the Year honors at the closing ceremony.

Growing Up a Hunter

Lee hails from Honaka’a, a small town of just 2,000 on the north shore of Hawaii, and he comes by his love for the water and hunting both fish and big game honestly. Even though Lee didn’t start spearfishing competitively until 2014, he’s been doing it almost his entire life.

His favorite fish to hunt is the Mū or Bigeye Emperor, while feral sheep are his big game of choice on the island, and mule deer if he’s hunting stateside.

But fishing and hunting aren’t merely pastimes or hobbies for Lee; they hold an even more profound place in his life and help fuel his health in a vital way.

“I’m a cancer survivor,” Lee said. “I had stage four neuroblastoma when I was little, and they took out one of my kidneys and half of my liver. So, I’ve got to keep my red meat meals not too extreme. I’ve got to stay away from the uric acid in pork and beef especially, so I eat a lot of elk and deer, but I eat more fish than anything.

“I love being able to go out there into the refrigerator and be like, hey, you know, I feel like eating a redfish today. So I go and hunt redfish.”

Of course, as the middle of three brothers, when he found out there were spearfishing competitions, he was all-in for being the best.

Part of the territory that comes with being among the best — and now the best — is that Lee is a role model for kids coming up in the sport. Something he’s not used to even after almost a decade of competing at the highest levels.

“I’ve been taking out a couple of younger kids here spearfishing and archery hunting and stuff like that,” he said. “As weird as it is to say that I am a mentor, I got a text message from one of their moms after I won.”

“She said, ‘I just want to let you know that your winning and claiming Honoka’a and claiming that some of the best spearfishermen are these young and upcoming kids really resonates with my boys. To see that spearfishing is taking you around the world has really sparked it for them.’”

“That’s all you kind of hope for,” Lee said.  “That you’re just putting a spark under a lot of gasoline for them to really explode.”

Of course, he’s also a proud son of his hometown, Honoka’a.

“Being this small town local boy that’s spent all of his life, grown up there, and lives and breathes the Honoka’a lifestyle — to all of a sudden be crowned national champion meant the world to me,” Lee said.

“My hometown is 2,000 people. We don’t even have a stoplight,” he laughed. “So, what’s being celebrated, you know, as far as spearfishing and archery, hunting — the things that I’m getting notoriety for — it’s just our way of life. Because it’s our way of life, we don’t think it’s special. It wasn’t until I started to compete that I was like, wow, this is what me and my friends grew up doing.”

“The kids that have continued to do it to this day, now they know how special what we’re doing is and how advanced what we’re doing is compared to the rest of the nation and parts of the world. They know the opportunity is out there to see the world via spearfishing, or via archery or hunting. I think that’s super cool.”

“From the text messages and phone calls that I’ve gotten from the people in the community congratulating me and telling me how proud they are and for ‘putting Honoka’a on the map’ — it really makes the victory that much sweeter to get the support and the love from the community that I’m so happy to be a part of.”