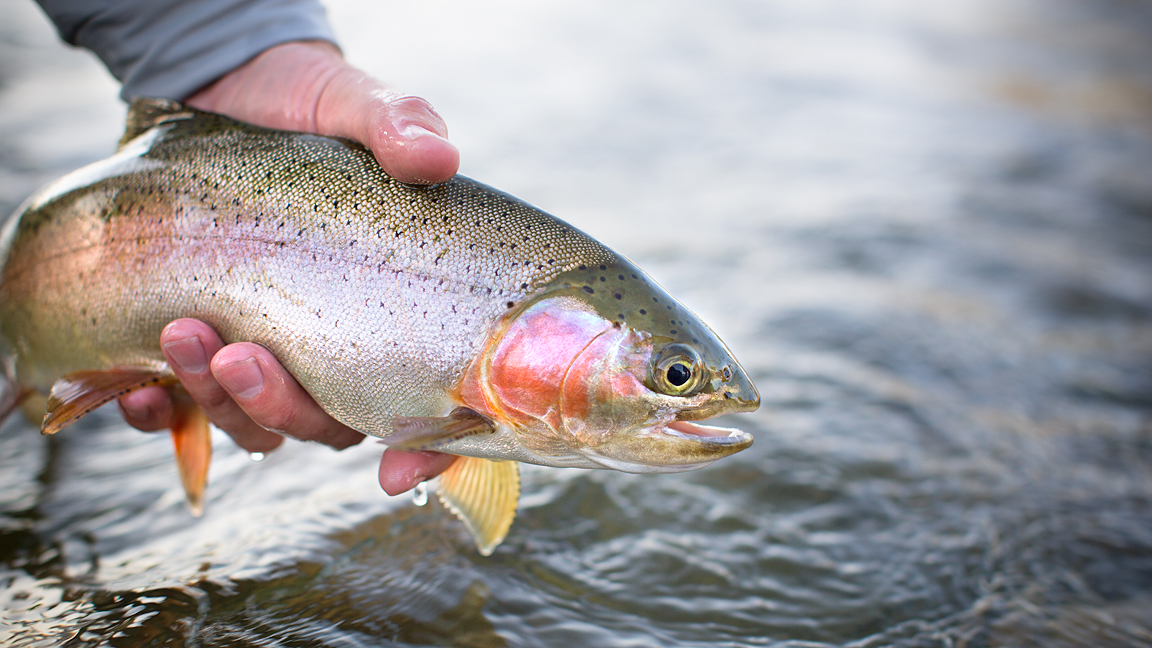 “A bad day of fishing is better than a good day at work” is probably the biggest line of bullshit in angling circles. “That’s why they call it fishing and not catching” is a close second.

While even the most seasoned angler may be happy with simply getting on the water rather than slogging through the alternatives at home or at work, deep down, no angler is truly okay with a fishless day.

Of course, not all water is created equal when it comes to fishing. There are lakes and rivers that are just plain stingy, leaving anglers with unused bait and bruised egos questioning their choice of pastime. Then there’s water where you’re landing so many fish you consider putting the ice from the cooler on your shoulder and never going home.

The nine rivers listed below fall into the latter, target-rich category. These are rivers with some of the most fish per mile in the Lower 48 (Alaska is its own animal) as measured by state and federal fish and game departments. If you fish any one of these and come off the water with more excuses than a teenager returning dad’s car with a dent, you might want to try frisbee golf.

Located in the high desert north of Craters of the Moon National Monument & Preserve, the Big Lost is a tailwater “Wild Trout” designated fishery with over 1,500 fish per mile. It flows clear, cold, and strong from the Mackay reservoir through miles of winding, cottonwood-lined riverbed, before disappearing completely underground into the Snake River aquifer. The Big Lost holds some giant rainbow trout, but be warned: They didn’t get that big by being stupid.

The Madison is a river that automatically conjures visions of A River Runs Through It in the minds of every westward-dreaming angler. Depending on which section you run your drift boat, brown trout numbers run as high as 1,339 fish per mile and rainbow trout over 2,000. These numbers, while impressive, are actually near a 20-year low for the river. Between prolonged high temperatures and lacking spring runoff, fish numbers are suffering. There are still plenty of opportunities to fish, but it’s limited by “hoot owl’ restrictions in some areas, as you might expect.

Utah is home to one of the finest tailwater fisheries in the country and is considered one of the 50 places to fly fish before you die. The Green River holds 8,000 to 14,000 browns, rainbows, cutthroat trout, and cut-bows (cutthroat/rainbow hybrids) per mile in Section A. With 28 total miles to float, including Sections B and C, and dramatic views the entire way, the Green is a win-win (win-win-win-win) for any angler.

Hungry, active, and large fish are a hallmark of the South Fork. Add a 6,302 fish per mile survey in 2020 — the highest in Conant, a major launch on the river, since 1982 — and you have the recipe for a mind-blowing day, or season, on the water. Heavy snowpack put more water in the river, which helped maintain habitat. For comparison, the 10-year average is 4,710 trout per mile.

Located about 40-miles south of Durango, Colorado, the San Juan is a year-round Gold Medal trout river, which means it has the highest quality cold-water habitat and the capability to produce the highest quality fish (14-inches or bigger). A fitting designation considering the river boasts 15,000 fish per mile, consistently producing fish 16 to 18 inches in length.

One of the premier tailwater fisheries in the Northeast, the 33-mile West Branch of the Delaware River is known for big browns, including a 33-inch beast caught in 1998. The 1,000 fish-per-mile population is well fed by an endless buffet of big brown and green drake mayflies, and stoneflies. Fish also gorge on alewives that wash over the Cannonville Dam in the spring.

The Box Canyon section of Henry’s Fork is sitting on one of the five best seasons for trout numbers since 1994. Of the 4,209 fish per mile, the largest group in size is 12 to 14 inches, which are 2-year-old fish. Much like the Delaware, Henry’s Fork is an aquatic insect factory, which means trout are well-fed even in numbers this plentiful.

There are worse places to chase trout than Central Oregon, for sure. The Crooked River runs 125 miles from the confluence of the South Fork of the Crooked River and Beaver Creek and flows through some seriously rugged terrain before it drains into the fabled Deschutes River. It may be home to roughly 3,500 steelhead, browns, and native rainbows per mile, but the river is actually one of the smaller trout streams in Oregon.

This seven-mile stretch of the North Platte tailwater fishery is home to roughly 4,000 fish per mile with the average size at 16 to 21 inches. The Mile has browns, rainbows, and cutthroat trout up to 30-inches long that feed on everything from big crayfish and golden stoneflies to tiny midges and mayflies.

Read Next: Fishing the Frank: A Fly-In, Fly-Fishing Adventure in Idaho’s Largest Wilderness