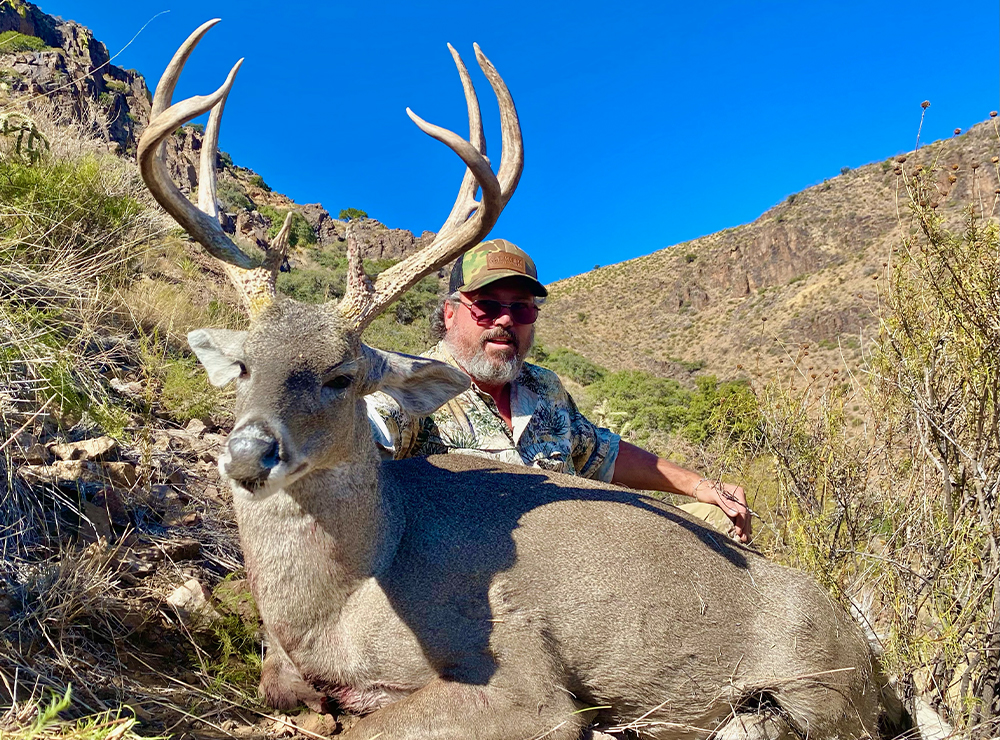 Cibolo Creek Ranch in West Texas was established in the mid-1800s by Milton Faver. Legend has it that Faver fled Missouri for Texas after gunning a man down in a duel. Only 45 miles north of the Mexican border and an hour south of Marfa, the 30,000-acre ranch became an important outpost for trade along the Rio Grande. More than 170 years later, it’s now known as the home of a potential record book deer killed by Texas native John Hughes.

Hughes’ rare deer is a Carmen Mountain whitetail, the resident cervids of the area that were first discovered in Mexico in the 1930s. They are one of four subspecies of the whitetail deer in Texas and a smaller cousin of the Coues deer, which makes the size of Hughes’ 131-inch free-range buck that much more impressive. Some people call Carmen Mountain whitetails “Coues deer,” and Boone and Crockett put them in the same category in its record books.

“On our first morning, we were driving back up in the mountains, and Jasper, our guide, saw what he thought was a monster Coues,” Hughes said. “My son Coleman jumped out, and they advanced on this deer. Then they turned, and they ran back to the truck. The buck was so big Jasper wanted Coleman to have a super solid rest, and so he put him on the truck.”

The rare deer was on the move and quickly outrunning the range of his son’s rifle.

Coleman took his shot at 600 yards and missed just right off the front shoulder. The deer disappeared.

The next morning, Hughes and his son headed out on their own with Jasper out of commission from salmonella poisoning. They located a giant aoudad, and Coleman was able to put a perfect shot on it.

“This thing was an absolute beast,” Hughes said. “Sheep life is pretty rough. They live in very rough places, and they fight for their [mates], you know, unlike most other animals. This guy was probably a rut away from being a one-horned sheep. His right horn was just about broke off.”

Killing the Aoudad was the first of a couple of high points for Coleman on this hunt. He was also able to ring the bell on a heavy mule deer later in the trip.

After they packed to sheep out, the men headed back to the spot they last saw the big deer.

“We went right back up in there, and there he was,” Hughes said. “I didn’t know it was that same deer since I didn’t actually see him yesterday. I was like, ‘Holy crap, that’s a 130-inch whitetail buck.’ Now, in South Texas, we would cull it, you know, two years old and not a desirable whitetail for what we’re used to in South Texas. So we just watched it meander off.”

Jim Breck owns High West Outfitter, the operation Hughes and his son were hunting with. He called Hughes to see how they were making out without their guide. After hearing about the deer, Breck told Hughes that there are no whitetails in the area and that he was describing a potential world record Carmen Mountain whitetail.

Breck grabbed their sick guide and drove out to where the Hughes’ were posted up.

“I’m 700 yards away, so I set up with Jasper’s Nosler,” Hughes said. “All I can see is his head and his antlers. He’s tucked himself in up under a cliff with a bunch of logs and trees in front of him.”

The men had been watching the buck for an hour, so they knew he was not in a hurry to move. They decided to touch off a round into the cliffs above the deer to see if they could roust him.

“He scooted out, maybe took about three or four steps,” he said. “Just enough that I could make a shoulder. My first shot missed to the right just like Coleman did. The winds up there took my second shot just left.”

His third shot found the buck’s shoulder, and the animal dropped where it stood.

“I didn’t realize how big it was till we got up there. Like, holy shit,” he said.

A Carmen Mountain whitetail in the 90- to 100-inch range is considered typical in size, but anything beyond that 100-inch mark is world-class.

The men green-scored the stud at 131 inches, which is only 7/8-inch shy of the No. 5 typical Boone and Crockett record Coues deer (again, B&C doesn’t distinguish between Carmen Mountain whitetail and Coues deer). It’s also a shoo-in for the Safari Club International (SCI) Top 10; SCI is the only club that recognizes and ranks the Carmen Mountain whitetail as a category separate from Coues. It was a rare deer indeed.

With only 128 Carmel Mountain whitetails total in the SCI record books, Hughes is in some pretty exclusive company. Of course, the record book buzz is something he could take or leave.

“Personally, I don’t give a rat’s ass,” Hughes said. “I guess is a big deal just because there’s not very many big Coues deer killed anymore. For me, hunting with my son and having the story means more.”

Read Next: Texas Elk Hunting is Brimming With Free-Range Opportunities