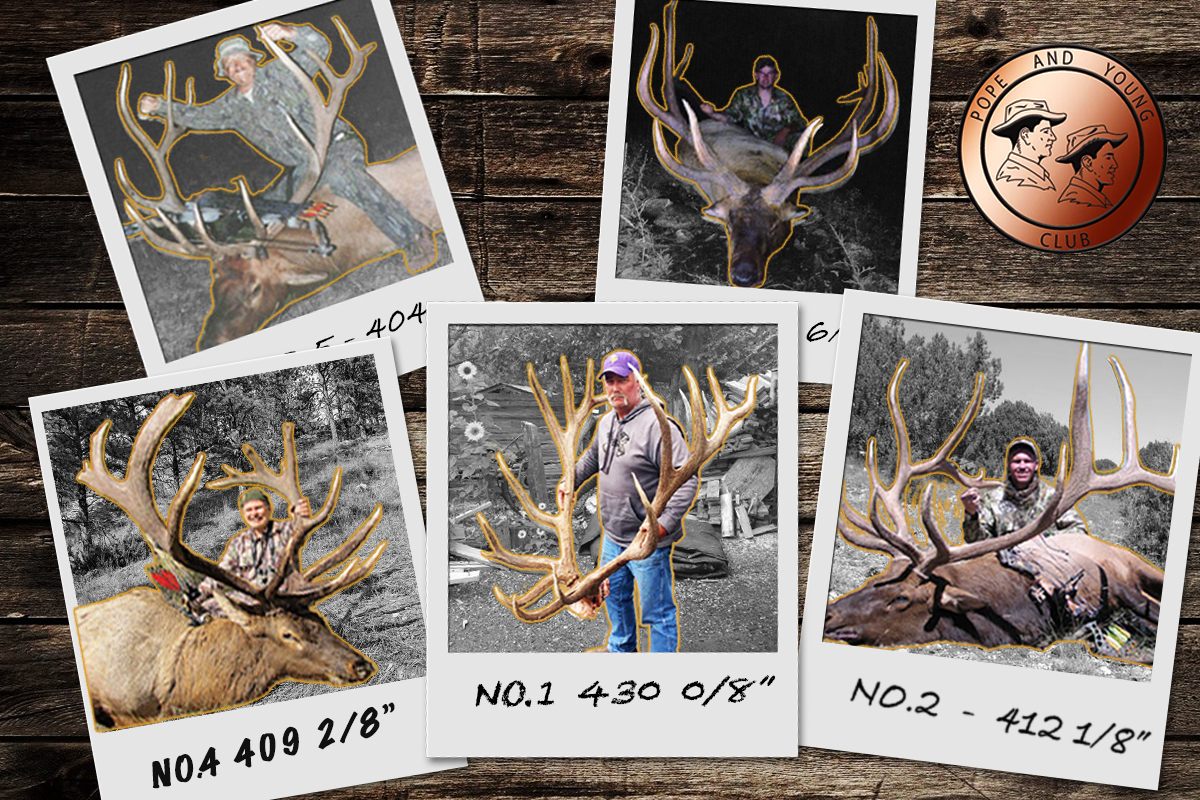 There are big bull elk. Then there are really big, world-record-class bull elk. The Pope and Young Club awards North America’s finest archery-killed wapiti by size in two categories: typical or symmetrical antlers and non-typical or unsymmetrical horns. The minimum score for a typical elk to qualify for the club is 260 inches.

Arizona claims seven of the top 10 Pope and Young typical world record bull elk records. Six of the seven largest archery-killed elk in the world were taken in Coconino County alone. Other P&Y records, including non-typicals, have come out of Greenlee, Navajo, and Graham Counties.

Coconino County accounts for approximately 20% of Arizona’s hunting opportunities. It’s the largest county in the state, with some 95% of the acreage open to the public as United States Forest Service land.

Why are there so many P&Y archery records from that area? First, Arizona has a warm climate, excellent habitat, tightly managed hunting, and a Goldilocks elk population: not too big or too small.

Second, the hunting seasons favor archery, big time. Early archery season covers most of the rut in Arizona, October is closed completely, and then late archery opens in November for another two weeks. Other western states like Montana, Idaho, New Mexico, and Colorado follow the same archery-preferred early seasons.

Third, getting drawn for an Arizona elk tag is about as likely as marrying for love then later finding out there’s money, too.

No. 5 – The William Wright Bull

Think back to 1992, when we striped our faces with black, brown, and green greasepaint, shot long arrows with Wasp Cam-Lok broadheads, and wore Treebark camo and boonie hats. That was the feel of bowhunting the year William Wright shot this impressive bull in Coconino County, Arizona.

Wright’s 404-inch bull is one of six record-setting archery bulls in the top 10 from that county. There’s no information on the story behind his elk — we just know it was the No. 1 bull in the world for eight years until Chuck Adams dropped a giant in Rosebud County, Montana.

With 200 Pope & Young record-class animals to his name, Chuck Adams is a bowhunting legend for good reason. Adams was the first to kill every North American P&Y big game species with a bow and arrow. The feat became known as the Super Slam, a term Adams coined after filling all 27 tags.

In 200, Adams was shooting Easton Full Metal Jacket arrows with a Hoyt bow when he arrowed his 409 2/8-inch bull in Rosebud County, Montana; and his legend went to another level. After unseating the Wright Bull, Adams’ bull held the No. 1 spot in the record books for six years. This special animal was also the 200th elk of his career.

Related: How to Speak Elk, Lesson 2: Understanding Every Funky Sound

Jed Reidhead sits in the No. 3 spot in the record books with his 410 6/8-inch bull, killed in 2013. Reidhead connected with this bruiser in Greenlee County, Arizona. Located southeast of Coconino County and separated by Navajo and Apache Counties, Greenlee is a game-rich area with antelope, black bear, Merriam’s turkey, mountain lion, mule deer, bison, whitetail deer, and waterfowl. Days after notching his tag, Reidhead helped put a friend on a 370-class bull.

Related: Bowhunting Elk: 7 Last-Minute Efforts the Can Improve Your Chances

No. 2 – The Shaun Patterson Bull

Patterson said in an interview that he and his guides crawled to within 100 yards of this giant and started bugling. As the bull made his way toward them, a raghorn came out of the trees at 10 yards and busted them. Every elk vacated the premises. Relocating the bull and stalking back into range this time, Patterson made a solid shot, and the bull went down within 100 yards of where he was arrowed. The impressive animal taped out at 412 1/8 inches and earned Pope and Young glory. Today, this previous world record stands at No. 2.

Related: Elk Hunting on Public Land: How to Build a 3-Year Strategy for a New Area

On a beautiful Montana morning in September 2016, 100 yards stood between Steve Felix and a jaw-dropping bull. The gold standard of elk — the pinnacle of the world’s finest typical archery bulls — took his sweet time bugling and feeding his way down a basin toward Felix. With a skinny, ragged-out tree marking the outside of his range, Felix waited an eternity before the giant finally followed a 310-class bull into Felix’s reach.

A well-placed 60-yard shot just behind the shoulder of this massive 430 0/8” bull (official score) was all it took. After a half-hour wait, he found the elk not far from where he’d shot it, and the rest is world-record elk history.

Read Next: How to Score a Bull Elk