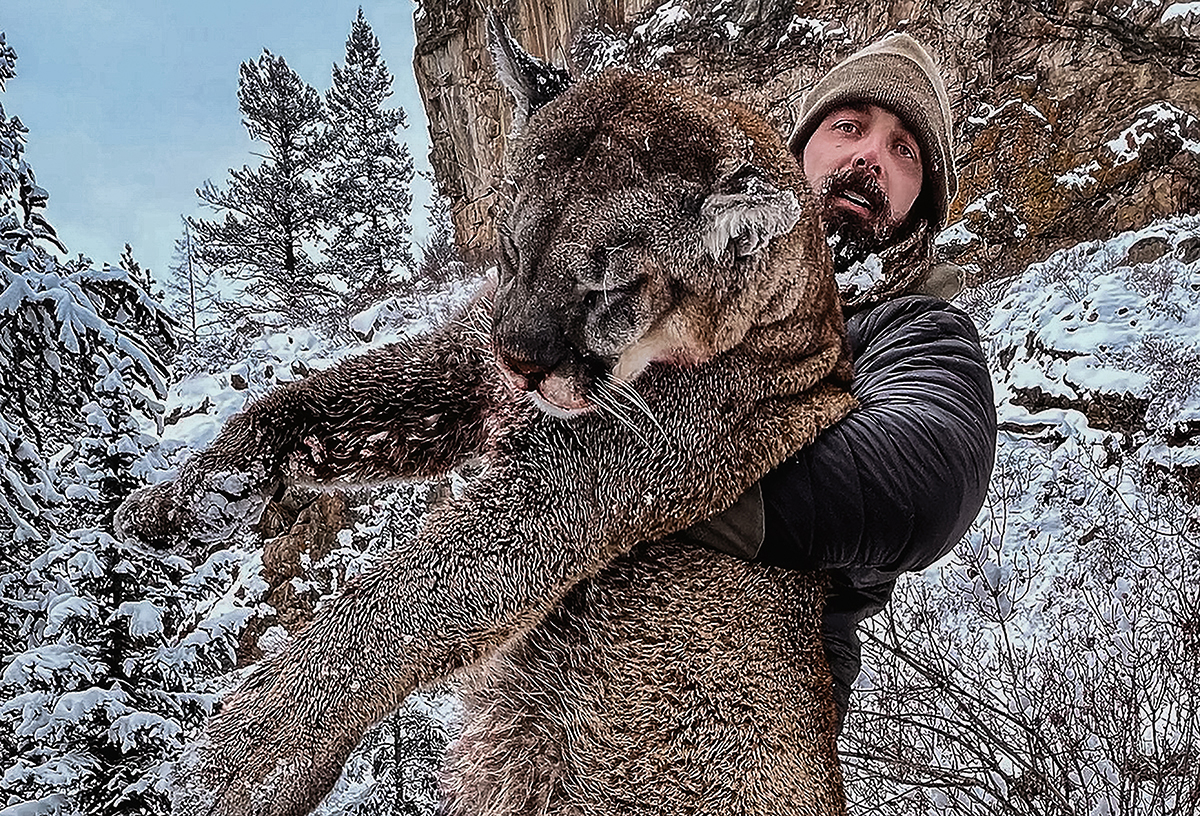 Last week, former NFL defensive lineman and Super Bowl 50 champion Derek Wolfe killed his first-ever mountain lion with his bow and some help from a buddy’s hounds — and the cat is absolutely massive.

The photo Wolfe posted to Instagram garnered plenty of attention. It takes a big guy to be an NFL defensive lineman, and at 6 feet 6 inches and 280 pounds, Wolfe is no exception. The photo (full version below) shows an absolute beast of a cat that practically dwarfs the retired football player.

“Gutted, he was 174 pounds,” Wolfe told Free Range American. “Obviously, I couldn’t weigh him up there on the mountain, so I’m guessing he had to be 200-plus.

By mountain lion standards, Wolfe’s cat is an absolute monster. According to Colorado Parks & Wildlife, adult males on the large side reach 8 feet in length and weigh an average of 150 pounds.

But the cat isn’t only a trophy for Wolfe with an incredible hunting story attached to it — he actually did the local community a service by taking out this particular mountain lion.

As Colorado cat populations thrive, interactions between people and mountain lions have become tenuous, with family pets often ending up on the big cats’ menu. Before the hunt, Wolfe and his buddy tracked his big cat to a den under a residential porch, and two neighborhood dogs had recently fallen prey to an area cat.

It appears the local pet population and the owner of the house attached to that porch owe Wolfe a little extra gratitude. Here’s how he got on the cat, tracked it through a residential area, and treed it, and how the former pro athlete crawled on his hands and knees to make the shot after climbing a rocky slope completely smoked him.

Wolfe played college football as a defensive lineman for the University of Cincinnati and was drafted by the Denver Broncos in 2012. He played eight years with the Broncos, helped the team win Super Bowl 50, and then finished out his career with the Baltimore Ravens.

Wolfe said he grew up hunting and killed his first whitetail with a bow when he was only 13. However, football demanded so much time, energy, and focus that he didn’t have much left for hunting. Wolfe left the NFL just before the 2022 season. While he regularly spent the off-season chasing wild hogs and axis deer, now that the 32-year-old has retired from professional football, he has plenty of time to pursue his passion for hunting.

Wolfe bagged his colossal cat in Game Management Unit 46, which includes parts of Clear Creek, Park, and Jefferson counties. The unit is not far from Nederland, where mountain lions have terrorized the small town by killing at least 15 neighborhood pets, including a 100-pound Doberman pinscher.

“People in parts of Colorado are really dealing with this, and [Colorado Parks & Wildlife] is only supposed to help when it comes to livestock, and they have to follow the law,” Wolfe said. “There’s nothing that protects pet owners from mountain lion attacks. If a mountain lion attacks your pet and you kill it, you could be ticketed for that.”

Wolfe had been waiting for the opportunity to get a mountain lion with his bow, partly because he had heard about the animals harassing residents and killing their pets. He passed his mountain lion certification exam and bought his license, so when his buddy Alex Nestor called him up after a fresh snow and asked him if he wanted to cut tracks on a big cat, he was ready to go.

On the morning of Jan. 18, Wolfe and Nestor drove along back roads looking for a cat sign. They found evidence suggesting a mountain lion in the area may have been targeting pets, just like the mountain lions stalking Nederland cats and dogs.

“This was for sure a mature male,” Wolfe said. “We looked to the left as we were walking up on the tracks, and there was a full-grown 300-pound 4×4 mule deer lying under a tree that this cat had dragged across the road. It was still a little warm, so we knew it was fresh from that morning.”

They followed those monstrous tracks through someone’s yard and up under their front deck.

“We were like, ‘Oh, man. This isn’t good. This cat is way too comfortable being near people. He’s stalking something here, coming up on the porch and looking in windows. He’s looking for pets or people.’”

The Hunt and the Climb

After two hours of calling around trying to get the landowner on the phone, the two hunters finally got permission to track the cat through private property up into the adjacent public land.

“We put the dogs on the tracks, and where is the first place they went? Boom. Right under that porch. That’s where the scent was heaviest,” Wolfe said. “It’s insane. Any time this guy came walking out of his house, this 8 1/2-foot, 200-pound cat could have been lying under there.”

The dogs eventually followed the cat tracks up into the surrounding mountains, and Wolfe and Nestor followed.

“This area is super mountainous, with straight up-and-down cliffs. There was 2 to 3 feet of snow on the ground, and once the dogs were on him, we went straight up to the top and then straight down the other side.”

Wolfe described how rushing up a nearly 4,000-foot elevation change was one of the most physically and mentally challenging things he’s ever had to do.

“It took me forever to get to the top on the first climb because I was just slipping and sliding on these rocks. It’s all rocks, straight up and down, and you can’t post into it because of the snow,” he said. “The rocks just slip out from under you. So I’m crawling up the hill on one side, then basically sliding down on my back the whole way down the other side, and then trying to get up through a ravine.”

Nestor, still following his dogs, had managed to get ahead of Wolfe, so he dropped him a pin on his phone, marking the spot where the hounds had the cat treed.

“I go straight to the pin and just come out on the road. Then I got the message that said, ‘Dude, you’re, like, 1,000 yards below me.’ I could hear the dogs howling their heads off up there.

“By this point, my legs were cramping. My hamstrings, my calves, and my quads are locked up, and I could hardly walk without being in a full-body cramp. I’m gassed and sucking air. The muscles in my rib cage just locked up on me because I was sweating. It was a crazy sweat, too, because it was so cold.

As a retired pro football player, Wolfe is no stranger to hard work and physical exertion, but this hunt beat him up.

“It was the hardest hunt I’ve ever been on,” Wolfe said. “It felt like I just did a full padded practice in 90-degree heat, but it was cold and snowy somehow. It’s all right, though. You’ve got to pay the price to get to them, man. That’s just the way it goes, especially with a bow.”

Wolfe crawled on his hands and knees the rest of the way up the ridge to get to where Nestor’s dogs had the cat snagged in a tree.

“When I got to the spot, I was just laying there looking up, and there’s the mountain lion above me in the tree. And I’m like, ‘Oh, god. Don’t fall on me, please.’”

Wolfe was so exhausted he wondered if he could pull the 80-pound draw on his Hoyt Highline. Somehow, he managed to stand up and reach a good spot about 12 yards from the tree. Then, he lined up the pin on his Spot Hogg sight and sent a Sevr broadhead straight through the big cat’s vitals.

“I made a really good shot, an ethical shot, and that cat dropped right where I had just been laying.”

As every hunter knows, there’s only a small moment of celebration after a successful shot, and then the real work begins.

“After all that, I still had to get the cat out of there,” Wolfe said.

“We gutted it and stuffed it, long ways, in my Kifaru pack. His head was hanging out on my right side, and the tail and hinds were flapping out on my left. I put my bow on my back. Then, I got down on my hands and knees and crawled out of there backward, all the way down.

“I couldn’t stand up and walk because my legs were just locking up on me,” Wolfe said. “At one point, I fell about 10 feet down a rock face.

“Everything was straight up and down, I couldn’t get any traction, and I had to wrestle with 180 pounds of cat the whole way.”

He focused on taking one little backward step at a time, mostly on his hands and knees, until he finally made it back to the truck with his cat.

“CPW came out and checked the animal. I was laying on the side of the road because I was just wrecked,” Wolfe said.

Now, as Wolfe spoke to me over the phone from his home in Denver, the hunt is almost a week behind him, and the cat is in various places. The mountain lion’s meat has been sent to a processor, his skull shipped off for scoring, and the hide sent to the taxidermist.

“I haven’t [eaten] mountain lion before, but I hear it’s really sweet meat, so I’m looking forward to it,” Wolfe said. “I had some breakfast sausage made so we can eat biscuits and gravy.”

While Wolfe admits this was one crazy hunt, he said the craziest part is the hate that’s been spewed at him online after the fact, despite the hunt being 100% legal. Major media outlets have been quick to cover how social media keyboard warriors have attacked everything from Wolfe’s character to his masculinity.

“I’ve had death threats. I would definitely say defamation,” Wolfe said. “It’s these animal rights groups coming after me, trying to say I had no right to do this, that I’m a murderer, or that I’m trying to compensate for something.

“I’m not trying to compensate for anything. I just love doing this. This is a lifestyle for me,” Wolfe explained. “Leave me alone. I did everything right. I did everything legal. I’m not out here poaching animals. I’m doing it the right way, the ethical way, and the way it’s meant to be done.

“It’s important to manage any herd, whether it’s deer, elk, bear, or mountain lions. They all need some kind of management because they will starve themselves out, they’ll get diseases, they’ll overkill, and they’ll harm people. There are lots of reasons.

“Hunters are conservationists. That’s what we are. We love animals, and we want them to be around for generations. 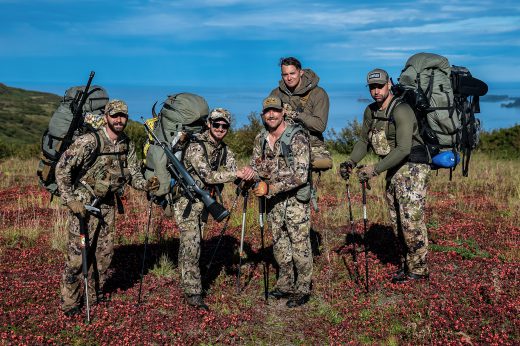