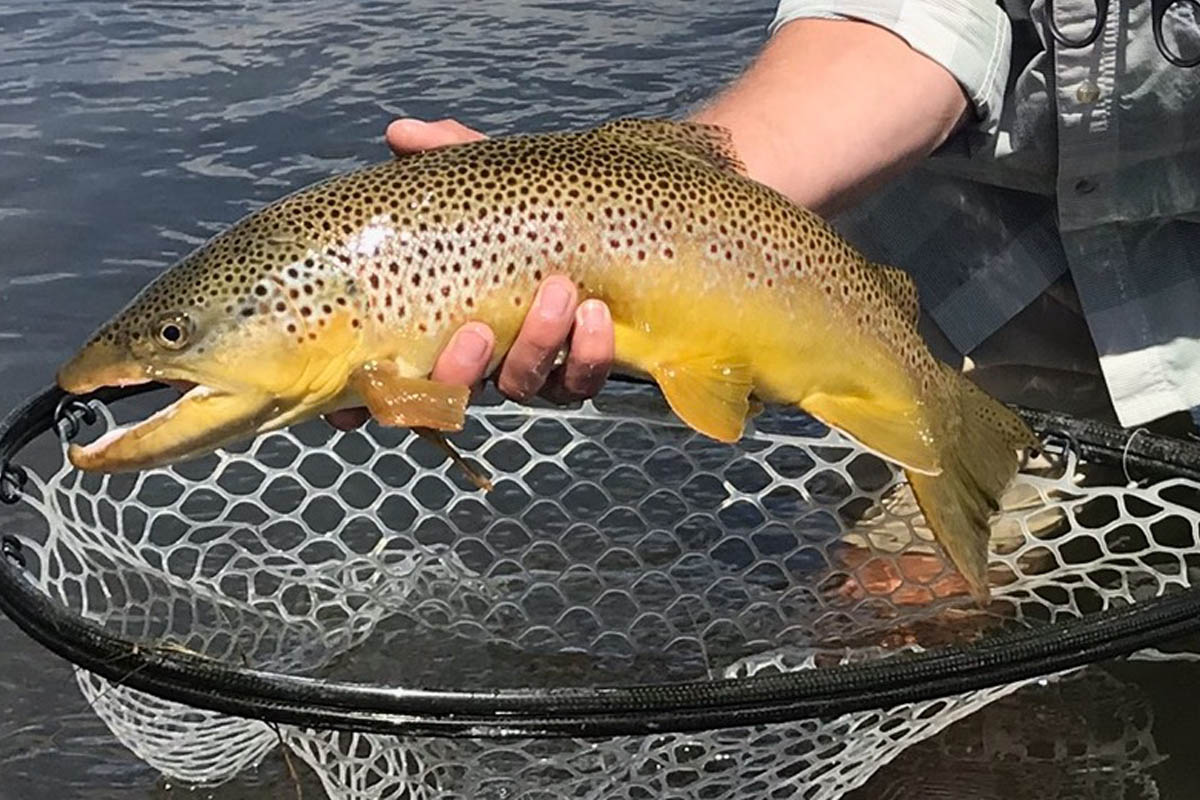 Brown trout numbers are dropping across southwest Montana — and biologists don’t know why. Angling pressure, warming water, and the ongoing drought could all be reasons behind that widespread decrease across many of the region’s rivers, but right now, Montana Fish, Wildlife & Parks (MFWP) biologists still are searching for exact answers and ways to stop the massive decline.

“While we try to figure out what’s really the root cause of this, we should certainly be doing something. I’m not the decision maker, but that’s how I feel based on what’s going on biologically — we should be doing something,” Jim Olsen, MFWP’s fisheries biologist for the Big Hole River, told the Montana Standard.

According to the Montana Standard, MFWP biologists have conducted brown trout surveys for the past 50 years. While there were about 1,800 fish per mile in 2014 in the Big Hole River, which runs from Melrose to Brownes Bridge, now there only are 400 per mile. The Ruby River also has seen a major decline — 1,500 brown trout per mile to only 600 to 700 in the upper tailwaters. The Beaverhead River has seen a 50% reduction in total fish, dropping from 2,000 to 1,000 per mile. And the decline is even worse in the upper Clark Fork’s “most historically fishy section near the confluence with Warm Springs Creek,” which has seen a massive decline since 2013, dropping from 1,800 fish per mile to only 82 in 2019.

While the Jefferson River’s lower survey section didn’t find the same kind of decline in overall brown trout numbers, biologists did discover that “the number of younger, 2-year-old fish is the lowest it’s been in 15 years, at less than 50 fish per mile,” according to the Standard.

“It’s when we have low numbers of adults and low numbers of little fish. That’s where to me the red flag goes up that this is something really to be concerned about,” Olsen said.

Brown trout numbers also are at poor levels and have fallen below the 20-year average in the Madison River, and the upper Yellowstone has experienced a continual decrease in the number of brown trout in its waters.

“We’re absolutely concerned. When we go to manage these fisheries, it’s important we understand what factors are driving the populations — and we had a pretty good handle on that. All of a sudden, something new has come along that we hadn’t historically accounted for because it wasn’t there,” Matt Jaeger, MFWP fisheries biologist for the Beaverhead and Ruby rivers, told the Standard.

While each river is unique — some near agricultural land, others dammed tailwaters — Olsen knows that figuring out how to stop the brown trout decline is critical, even if he isn’t sure yet what is happening.

“The real answer is I don’t know. My guess is, given its ubiquitous nature, it’s got either something to do with climate or disease. If it was just the Big Hole, we could point at something like fertilizer or some sort of practice that may be occurring only in the Big Hole. But given that these trends are observed in almost all of our local rivers around here, that to me points to something more like that. But that is a guess,” Olsen said.

Determining the correct way to track and monitor fish in the Big Hole River, which is 153 miles long, and the other rivers isn’t an easy thing to do. Sure, there have been more anglers in the area, increasing from 30,000 in 2001 to nearly 90,000 in 2019, according to the Standard, but Olsen doesn’t believe that over-harvesting is the real issue here. The problem goes much deeper than an angler keeping an extra fish or two.

Biologists are looking at possible chemical runoff from agricultural lands that share riparian borders with the rivers in question along with low flows and high temperatures.

“I’m not saying that’s what we have, but there’s a lot of rocks to turn over yet,” Ron Spoon, MFWP biologist for the Jefferson River, told the Standard. “Which is why we are going to try to get together next week and compare notes.”

As a solution, MFWP is looking at possible regulation changes, such as switching to catch and release on the Big Hole and seasonal closures to help brown trout spawning in fall and egg incubation in winter, according to the Standard. While there isn’t an action plan in place just yet, short-term regulation changes while MFWP biologists determine further steps also could be put in place, MFWP spokesperson Greg Lemon said.

For now, David Schmetterling, an MFWP fisheries research coordinator, is gathering brown trout data from MFWP colleagues and US Geological Survey personnel to hopefully “identify trends that tell the story of the decline.”

“We are really concerned about it. We’re performing these analyses so we can get an understanding of what’s contributing to these declines,” Schmetterling said. “Local impacts could be more significant.”

Read Next: Fish of the Union: The Top 6 Species Claimed as State Fish