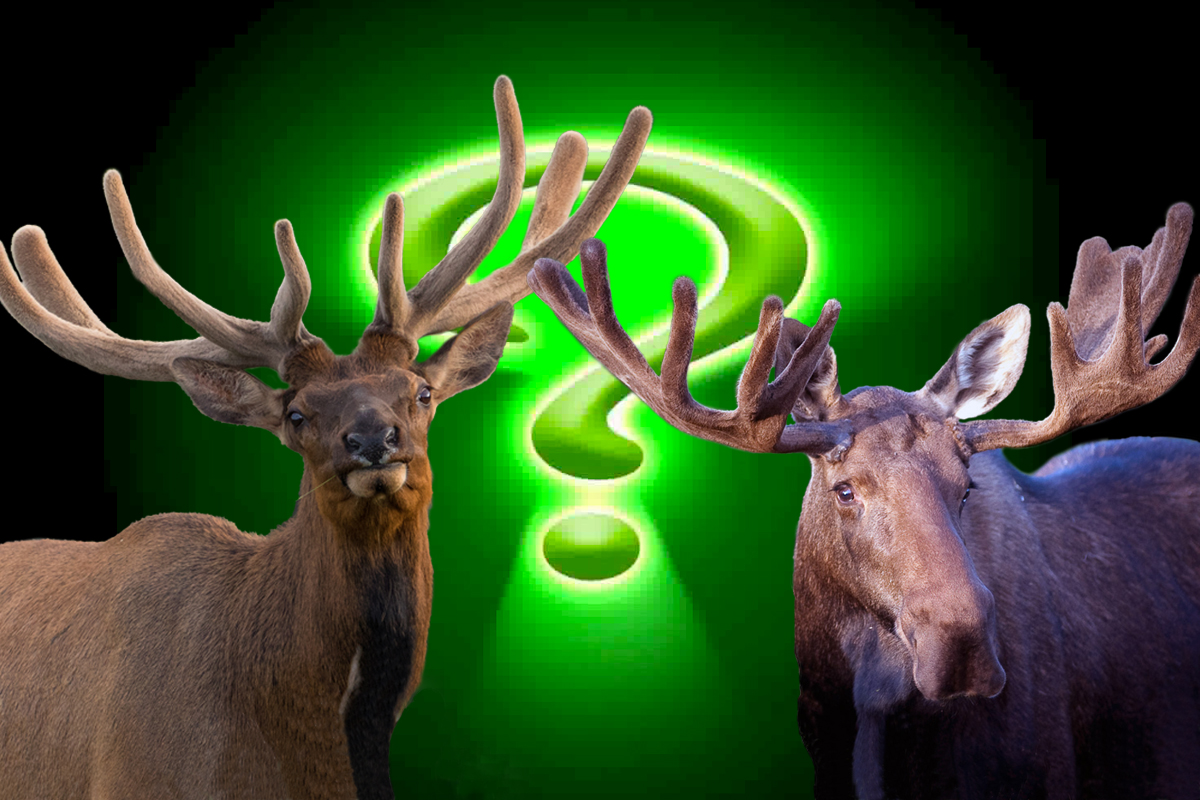 Some hunters have a problem with animal identification. We’re not talking about understanding the subtle taxonomic differences between a yellow pine chipmunk, cliff chipmunk, and uitnta chipmunk. No, hunters are having a hard time identifying elk vs. moose — enough so, alarmingly, that Idaho Fish and Game felt compelled to release a statement urging hunters to understand that moose are not elk.

The department said in its statement that multiple moose were killed illegally in the state’s southwest region in 2020 when hunters mistook them for elk — and it is every hunter’s responsibility to be absolutely sure of their target before touching off a round. Hunters need to “know their bulls” before they take to the field.

Similar warnings have come from Colorado and Wyoming as well.

New hunting and fishing license sales increased in states across the country in 2020 because the COVID pandemic drove people to the naturally socially distanced outdoors. Western states with iconic trout rivers struggled with their fisheries being loved to death because of the explosion of new anglers.

Already hunter-rich Michigan saw a 67% growth in the sale of hunting licenses and a 46% spike in apprentice licenses, which allows new hunters to try it out alongside a mentor. Nevada was up 30% in license sales, and Idaho saw a 28% jump. That’s a lot of new bodies in the woods and on the water.

Related: Elk Hunting Returns to Virginia for First Time Since the Mid-1800s

If you hunt, you remember all too well the mind-scrambling buck or bull (or doe or cow) fever you felt when your first big game target appeared. It was difficult to tell the difference between your ass and your elbow, let alone whether the animal was a shooter or not. Hell, it might’ve even been a coyote, but at that point, it was going in the back of your dad’s truck come hell or high water.

Now imagine a pile of newly safety-course-minted hunters looking for a genuine experience, likely coming from non-outdoor backgrounds, armed with new gear and guns, as well as hours of podcast advice on hunting public lands. There is no way that 100% of these folks have been appropriately mentored, and they have likely not spent nearly enough time in the field to bypass the need for a mentor.

Related: Elk Hunting on Public Land: How to Build a 3-Year Strategy for a New Area

The antlers of young bull elk and bull moose can look similar since moose don’t completely grow into their paddles until they’re 8 to 13 years old, so the structure looks more antler-like. When they’re in velvet, the similarity is even stronger. Female elk and moose don’t have headgear at all, so body characteristics are the only distinguishing factor.

Aside from headgear, there are significant differences between elk and moose. A full-grown bull moose can be 6 to 7 feet tall at the shoulder and weigh over 1,000 pounds. A mature elk will be 4 or 5 feet tall and only weigh (only, that’s funny) around 600 pounds.

Moose generally have a darker body, whereas elk have a brown neck and cream-colored body. Moose have a much larger head than elk and a large, downward-turned nose. They also have a dewlap that hangs from under their throat. Both have big necks, but moose have a large hump above their shoulders, adding to the larger neck mass.

When a hunter sees horns and their brain goes fuzzy with adrenaline, mistakes can and will be made. The same goes for seeing a cow elk or moose. An absolute giant big game animal combined with limited experience and a powerful rifle do things to the mind. Veteran hunters are not beyond reproach here either.

At the end of the day, if a hunter is heading into the woods with an elk tag, they need to make damn sure the massive body in their scope is a Cervus canadensis and not an Alces alces. Ignorance is not an excuse, Fish and Game officers don’t play, and the stakes are high. A misidentification could cost a hunter thousands of dollars and result in a possible felony charge.

“It’s a pretty simple principle,” Southwest District Conservation Officer Marshall Haynes said, “and it’s one of the first things you are taught in hunter education: If there is any doubt at all, you should never take that shot. There is no excuse for shooting the wrong animal.”