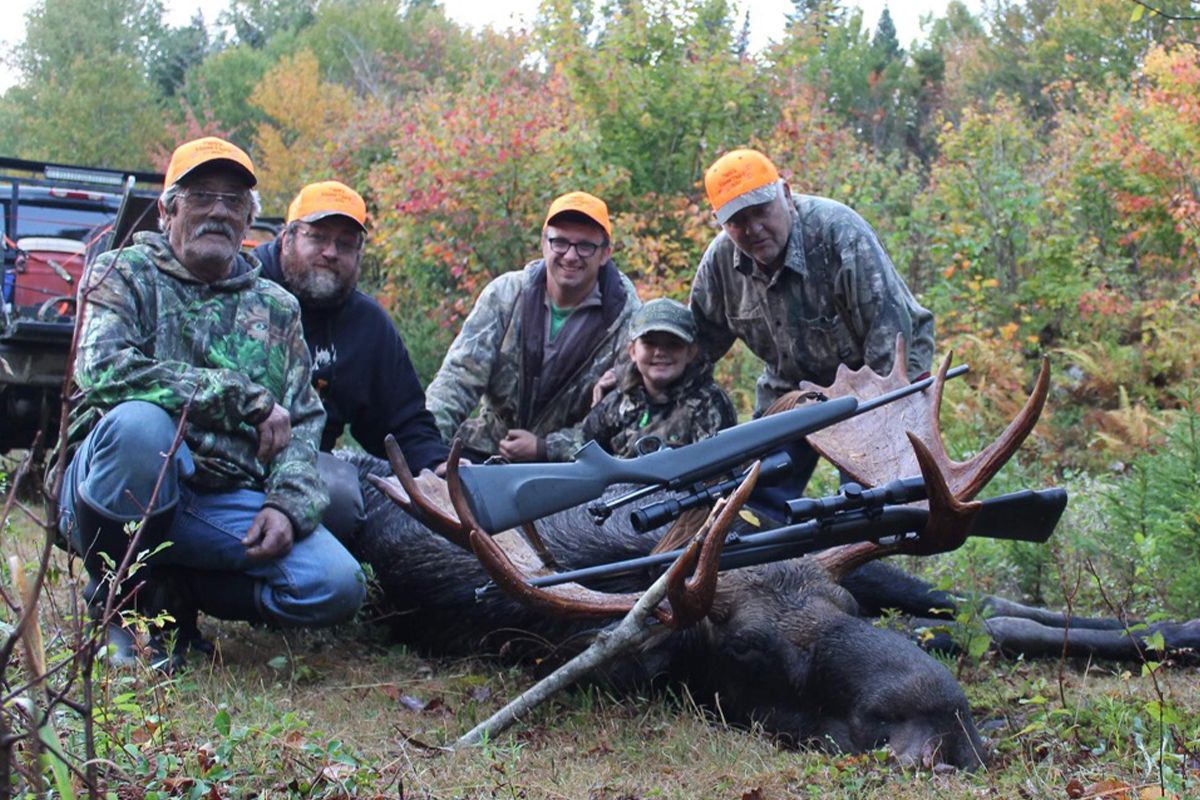 Ronald Argraves Sr. has been waiting patiently the past 40 years for a Maine moose permit. At 73 years old, he knew his odds were not getting any better with each passing season.

But, after all that waiting, the Castle Hill resident finally drew a coveted moose tag for 2021 and wasted no time notching a Maine grand slam: killing a turkey, black bear, moose, and whitetail in a single season. This year was full of special hunting moments for Argraves — he was even accompanied by several members of his family the day he filled his moose tag. It was truly a season of slim odds and big rewards for this dogged Maine hunter, right to the last shot he took.

If nothing else, Argraves became a realist over the past four decades and says he probably drained every last bit of hunting luck he had left this year. A triple-bypass surgery in 2019 probably helped shape his perspective as well.

“Once in a lifetime,” he said. “First moose permit ever, so I won’t get a chance for it again. I guess I could, but I highly doubt it.”

But drawing a tag was just luck — and patience. Argraves still had to actually kill a moose, plus the other animals on the grand-slam list, and he only had from September to early December to do it. Fortunately, he found a fantastic bull to hang his tag on in late September.

To make it all the sweeter, his son, Ronald Jr., oldest grandson, Justin Lewin, oldest granddaughter, Samantha Argraves, and his best friend, Joe Paganucci, were with him when the deal went down.

Ronald Jr. was the guide and put them on bulls immediately, calling one into range for his father.

“We got a nice bull on the first day,” Argraves said. “We probably could have waited for a bigger one, but I wasn’t going to blow my chances ’cause you never know, we might not have seen another one all week.”

The proud grandfather’s bull weighed 860 pounds and his antlers taped out at 50 inches with some impressive paddles.

Even with a successful moose hunt 40 years in the making, Lewin said the animals are not the most important part for his grandfather. It’s always been about time with friends and family.

“Growing up, the house was full of family every night during hunting season telling hunting stories,” he said. “We had a 24-foot 1960s Prowler camper that was modified a bit. We sometimes had 12 people sleeping in there. We would take it way up in the north Maine woods, not too far from the Canadian border. A couple hours from the nearest gas station.”

“He used to chase after deer all day long,” Lewin added. “Other folks would stake out along woods roads waiting for him to jump some across the roads. He had a triple bypass in August 2019, so we had our doubts he would be able to continue his hunting passion. He recovered very well and has been hunting harder ever since.”

This year, Argraves shot a 258-pound sow bear in early September followed by the moose later in the month, and then a 20-pound turkey in October: a successful haul for any hunter. But it was his 11th-hour muzzleloader shot on a whitetail buck earlier this month that made his 2021 season one for the record books.

On Dec. 4, with the grand slam hounding his thoughts after eating tag soup during the regular deer season, Argraves headed to a piece of property owned by his oldest grandson where a one-week bonus muzzleloader season was still open.

“I just needed a buck with one antler that was 3 inches long and I would have been happy with that,” he said. “Really, a spike horn would have been fine to get that grand slam. Not many get it.”

Lewin, who is also a hunter, had some good bucks on his trail cams, including one giant. But his grandfather was once again a realist.

“[Justin] knew it was around but I wasn’t going to hold out for a big one, the first thing with antlers was going to be good enough,” Argraves said.

Hunting in the rain out of a blind he built and Lewin posted on a field edge, Argraves liked his chances for shooting a buck. But as the day wore on, the weather made visibility lousy with only 20 minutes of shooting light left.

Like it was meant to be, a buck appeared in the field and stopped just long enough for Argraves to get his .50-caliber muzzleloader onto a rest and touch off what would be his grand-slam-sealing shot.

“The smoke made it difficult to see where he went exactly, and with the rain, there was no blood to be seen,” he said. “I thought I may have missed. It wouldn’t be the first time.”

With the help of Lewin, they found the buck only a few yards into the woods from where he was shot.

And it wasn’t some spike; Argraves’ down-to-the-wire deer was a 13-point tank that weighed 202 pounds.

For the uninitiated, that’s how trophy bucks are measured and bragged about in most Northeast states — by their hanging weight after they’ve been field-dressed.

For the rest of the country: Argrave’s taxidermist green-scored the beast at 180-inches.

“When I saw it up close, it was bigger than I thought,” Argraves said. “I’ve shot many deer and seen many deer. It has the biggest rack of any deer I’ve shot.”

Related: How to Make Bear Brats

“I had seen the deer several times at night and on trail cameras,” Lewin said. “A few weeks ago I saw him in my garden at first light. Last year, the same deer was eating in the garden on several occasions. I had the opportunity to shoot smaller bucks this year but was holding out [for him]. I am very happy my grandfather shot him.”

The men discovered a number of puncture wounds in the buck’s hide, some of them inches deep. They were most likely war wounds from full-on scraps with other bucks.

Lewin said that his grandfather’s grand slam being capped off with a trophy buck is a fitting testament to his passion for hunting and sharing the sport he loves with others.

“He always brought along neighborhood kids and any nephew that wanted to tag along,” Lewin said. “Until he turned 70, he would never allow someone else to process [his] deer or any other game. Now that he is retired and gets a bit of social security, he’s okay with paying someone to process the game.”

Of course, Lewin now has an even bigger reputation to live up to as a Maine hunter.

“My grandfather set the bar for sure,” he said. “Hopefully, I have another 40-plus years to hunt and tag a grand slam like he did,” he said. “I am fortunate that I’ve been able to spend countless hours in the woods with him.”