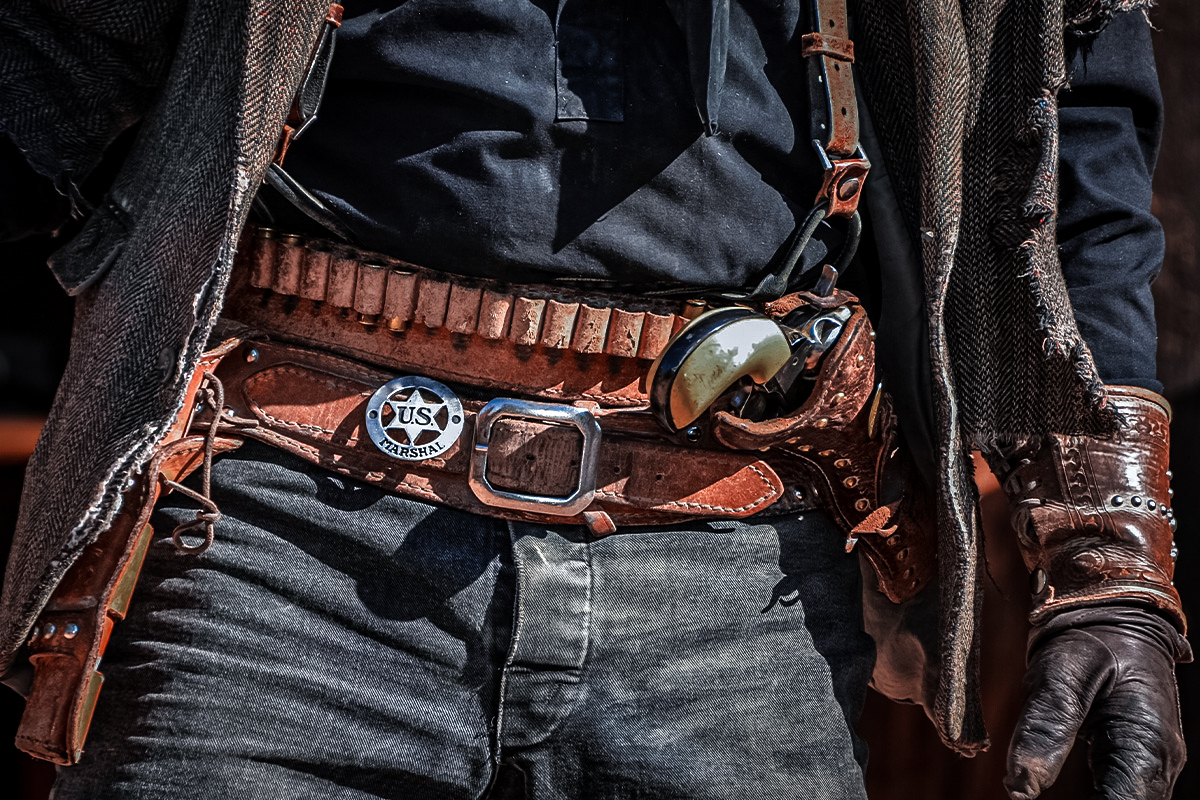 When the West was still wild, a man wouldn’t dream of riding the range without a gun. With all kinds of wild critters roaming about, from rattlesnakes and coyotes to dangerous two-legged varmints, a man always needed a firearm within close and easy reach. Men learned to live, work, and ride with their guns. However, the quick-draw, low-hanging, gunslinger holsters most of the world associates with cowboy guns simply did not exist on the late-1800s frontier.

The American cowboy is part history and part legend, with the scales, tipped slightly to the legendary side. What we know about real-life cowboys is based mainly on hand-me-down tales and Hollywood depictions painted with sweeping strokes of creative license.

The popular image of the cowboy decked out in batwing chaps, a 10-gallon Stetson, and a low-slung belt holster isn’t exactly historically accurate. However, when you toss in a manly swagger, you end up with Hollywood gold.

Old West cowboys were more commonly kitted out in blue jeans and bowler hats. These duds were inexpensive and provided freedom of movement for riding horses, roping calves, and that characteristic masculine cowboy saunter.

It is worth noting that making sweeping cowboy generalizations isn’t possible. Cowboy style and gear varied widely, and an individual’s style was influenced more by what was practical, affordable, and available rather than what was fashionable. However, a firearm was an almost mandatory accessory, and every cowboy needed some way to carry one.

The Earliest Holsters for Cowboy Guns

While it wasn’t uncommon to simply slide a pistol into a pocket or tuck one into “waist overalls,” the elements on the frontier could be rough on a firearm. Plus, the active frontier lifestyle made those carry methods pretty impractical.

The first holsters weren’t products of the Old West but, rather, military inventions. The earliest examples are from the 1830s and are little more than simple leather pouches that held heavy flintlock weapons. They were typically hung from or tied to a saddle pommel.

Carrying a beast like the Colt Walker revolver, which weighed more than 4 1/2 pounds unloaded, wasn’t practical for a belt, and holsters for these big smoke wagons were made for the saddles of the cavalry troops to whom they were first issued.

In the mid-1800s, leather pommel holsters moved across the frontier with American westward expansion. Civilian models mimicked standard military versions and often included a leather flap that covered the gun for extra protection from weather and grime.

How Long Guns Were Carried

Cowboys and frontiersmen didn’t rely only on revolvers. Winchester’s famous flat-sided, lever-action repeaters, and others like them, played a considerable role in taming the West. These carbine-length rifles were perfect for shooting from horseback and were often stored in a saddle scabbard for easy access on the range. Most buffalo hunters and frontier travelers could handle these compact weapons from the saddle with surprising proficiency.

Frontiersmen often paired a rifle with a pair of revolvers, like the Colt Single Action Army, usually chambered for the same ammo as their rifles. Twin sidearms weren’t meant for dual wielding — the idea was to switch to the second revolver once the first ran dry, since reloading most revolvers of the era was not a speedy process.

Frontiersman and author William E. Webb sang the praises of the lever-action/revolver combo in his book Buffalo Land, published in 1870, in which he indicates some folks used leather slings to haul their rifles around, even back then.

“Hung by a strap to the shoulder, this weapon can be dropped across the saddle in front, and held there very firmly by a slight pressure of the body,” he writes. “The rider may then draw his holster revolvers in succession and after using them, have left a carbine reserve for any emergency. Twenty-four shots can thus be exhausted before reloading, and, with a little practice, the magazine of the gun may be refilled without checking the horse.”

Some buffalo hunters would use a loop of leather to hold their rifles to their bodies, so they could drop it quickly to grab a backup pistol when their lever gun ran empty. When not in use, range riders kept their long guns stored in saddle-mounted scabbards to protect them from dust and wet weather.

The History of Cowboy Guns and Hip Holsters

While the military may have invented the gun holster, cowboys and other frontier travelers invented everyday carry, and everyone knows you need a dependable holster for EDC.

Having a gun on your person is better than having one on your horse when you need it. Saddlemakers began crafting leather holsters that allowed wranglers and ranchers to hang their hardware on the hip.

Popular in the 1850s, the California “Slim Jim” was one of the first Old West holster designs. Unlike its roughest pommel predecessors, which were little more than loose leather pouches roughly in the shape of a gun, the Slim Jim had a slender profile and a form-fitting body with a loop stitched into the backside to accommodate a belt. Unlike most pommel holsters, the Slim Jim also had an open top, providing much easier access to the weapon.

Slim Jim holsters were often decorated with tooled floral designs to show the leathermakers’ craftsmanship. More than just a practical tool, these holsters could make a serious fashion statement.

Originating in the 1870s, the Mexican Loop holster, also known as the El Paso Loop holster, was another popular cowboy design. Saddlemakers fashioned these holsters from a single piece of leather, often from salvaged saddle fenders.

The craftsman folded half the leather piece to make a sandwich with a contoured side edge stitched to form a pouch for the pistol to ride in. The other half of the leather swatch was folded behind the pocket to create a skirt. The skirt was slashed through the middle several times to form straps, and the pouch was pushed through the straps to form a more tight-fitting holster.

A lawman, outlaw, or simple cattle hand could slide a belt through the loop at the top of the holster so the pistol rode high on the horseman’s belt rather than hanging below it.

A cowboy’s holster rarely matched his belt. It wasn’t until after the Civil War when cartridge revolvers replaced cap-and-ball pistols, that leather workers began stitching loops into belts for shooters to store extra cartridges. The West was well on its way to being tamed before the iconic gun leather rig we tend to associate with cowboy shootouts finally made its debut on the wild frontier. Although they look pretty dope, cartridge belts weren’t particularly practical. Because a loop rig left cartridges open to the elements and potential damage and corrosion, most frontiersmen chose to carry extra cartridges in a leather belt pouch.

The tops of the earliest Mexican Loop holsters were little more than rustic pockets. The original design covered most of the pistol grip, which made accessing the firearm tricky. Some range riders modified the cut, lowering the top edge to expose the handle and part of the trigger guard.

Wild West pistoleers, like folk hero Wild Bill Hickok, carried their six-shooters with the butts facing forward. The position allowed the shooter to use a cross draw or underhand draw, which was common on the Great Plains during the time period.

Although a modified Mexican Loop holster provided a better grip and promoted a faster draw, they were far from the fast-draw version popularized by 1950s Westerns starring Roy Rogers, Tex Ritter, and the like.

What About Shoulder Holsters?

Although we often associate shoulder rigs with Bren Ten pistols and 1980s Don Johnson, their origin story begins more than a century earlier on the 1870s American frontier. Unlike hip holsters, a shoulder rig made it easy for lawmen and outlaws alike to conceal their firearms under a jacket or suit coat.

Famous Old West gambler Doc Holliday sported two Navy Colt revolvers, which he could draw from a shoulder holster with lightning speed — which any fan of Tombstone knows only too well.

The Influence of Wild West Entertainment

The Western cowboy became a superstar long before the Golden Age of Western films. In the late 1800s, traveling vaudeville acts like Buffalo Bill’s Wild West Show offered a glimpse of frontier life to folks in more “civilized” places back east and across the Atlantic.

Although these wildly entertaining depictions were the only source of information for some, the producers leaned heavily on exaggeration for theatrical purposes. Shows included trick shooting and acrobatic riding that real gunslingers would have never attempted in their everyday lives. Promoters gussied up performers’ attire, including their holsters, which were often embellished with silver-colored conchos to catch the audience’s eye.

When silent movies first hit theaters in the 1920s, the Wild West was a popular theme. Filmmakers borrowed heavily from the cowboy image made famous by traveling Wild West shows, and silver-spotted holster rigs were one significant carryover.

What the Reel Old West Did to Cowboy Guns

Old West cinema peaked from the 1940s through the 1960s. Catering to a post-World War II generation, the John Wayne era of cowboy classics like Stagecoach (1939) and True Grit (1969) birthed the “buscadero” holster. This low-riding rig is still associated with the fast-draw, gunslinging, shoot-’em-up cowboy culture created on the silver screen.

Buscadero holsters hang low on the leg, so the gunslinger didn’t have to bring his hand up to his waist to draw his sidearm, and there was often a band of leather strapped around the cowboy’s thigh to keep the holster from riding up when he pulled his pistol.

Eventually, buscadero holsters evolved into the fast-draw holsters that make regular appearances in cowboy action shooting competitions. These holsters have circular spring-metal straps sewn inside the holster to hold the top open. The straps also spun the revolver wheel inside the holster, allowing the shooter to begin cocking the weapon before clearing the top of the holster.

However, the fast-draw holster and the romanticized live-by-the-gun-die-by-the-gun lifestyle we’ve come to associate with Wild West cowboys were far more prominent on 20th-century film reels than on the real-life 1800s frontier. 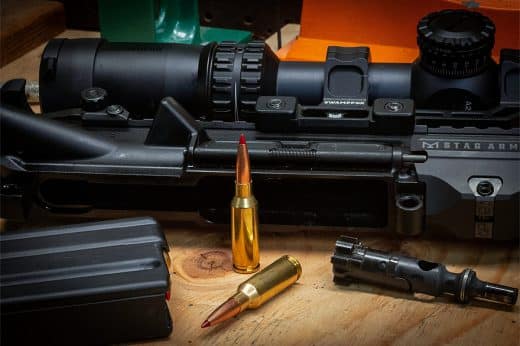 6mm ARC: A Compact Long-Range Round You Should Know About 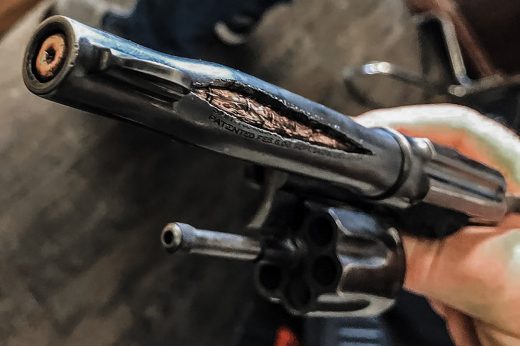 How to Recognize, Handle, and Prevent a Squib Load or Hang Fire