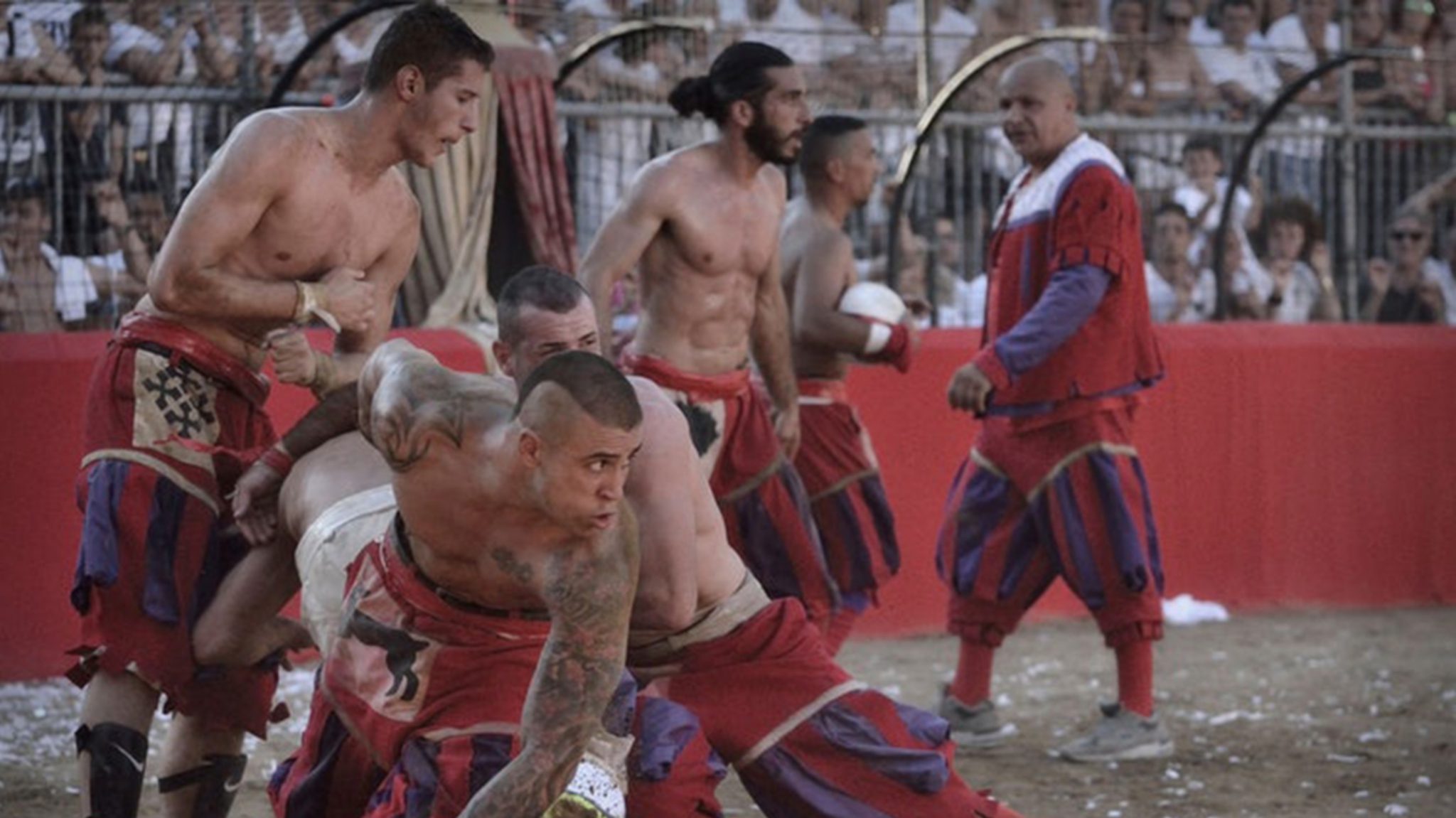 In 1530, the Italian city of Florence was under siege. Having become a republic just three years prior, the most powerful men in the world decided they would capture the city and restore it to its former rulers, the Medici family. For nearly a full year, the Republic of Florence resisted the onslaught. Forming a Renaissance-era supergroup, Pope Clement VII and Holy Roman Emperor Charles V teamed up to lay siege to the city. In defiance of the thousands of imperial troops outside the city walls, the citizens of Florence held their annual sporting event, the Calcio Fiorentino — a game so violent it made the battle at the city walls seem tame in comparison.

Even France’s King Henry III said in 1574 that the sport was “Too small to be a real war and too cruel to be a game.”

Calcio Fiorentino (Florentine football), or Calcio Storico (historical football), depending upon whom you ask, is basically a soccer-rugby hybrid held in the famous Piazza Santa Croce every year. For 50 minutes, 27 players from each of the two teams take to the sandy field to attempt to drive a ball to their opponent’s end of the field. There, the players have to get the ball into a net as wide as the field itself.

The rules are simple, but getting the ball to the other end of the field is not. There’s a reason that only three matches between Florence’s only four teams can take place every year. The players would not survive a full season of the Calcio. The middle of the field is a full-on battle, where almost anything goes.

Calcio’s full season begins with the semifinals. Four teams: Santa Croce Azzurri, Santa Maria Novella Rossi, Santo Spirito Bianchi, and San Giovanni Verdi compete for the chance to play in the championship match. The teams are named for the colors of their uniforms, which are blue, red, white, and green. Calciantes play for the district of the city in which they were born and cannot change teams. Some semifinal players do not make it to the final match because they are in the hospital. The entire season lasts ten days.

Each team has four goalies, three fullbacks, five halfbacks, and 15 forwards. With a few shifts, you can look at it as a soccer team or as a rugby team with multiple goalies—except there is no such thing as a try, a conversion, or a penalty kick. A score is worth a caccia, and a missed scoring attempt is worth a half caccia for the opposing team. That’s it. The team with the highest score wins.

The fullbacks and halfbacks fighting their way to the goal have to traverse a battlefield of forwards who try to decimate the opposing team to the point that they can no longer put up a fight. There are very few rules, the gameplay looks like is many individual MMA matches. Forwards try to knock down members of the opposing team by any means necessary. If a player is taken down, he can’t get up until a goal is scored.

Players of the Calcio, some of whom train all year for the event, call the midfield scrum a bloodbath. “You must be in good shape before getting into that arena,” said Santa Maria Novella center pitch player Riccardo Lo Bue in the Netflix documentary Home Game. “Because if you don’t have 50 minutes of battling inside you, you won’t be able to fulfill your role on the team.”

There are no substitutions in the Calcio since an entire team takes the field when the game begins. Though there are some prohibited moves, including sucker-punching an opposing player, hitting them while they’re down, or kicking someone in the head. The only other rules are those from the ancient code of chivalry, which involves showing respect for opponents.

The hope of lasting the entire 50 minutes is an important key to winning the game. A numerical advantage can mean a clear field with easy access to the opposing goal. The game was used to train Roman Legionnaires, so Calcio is not for the faint of heart. The essence and foundation of the game, after all, is the violence.

This article first appeared in Skillset Magazine on Dec. 2, 2020.

Read Next: ‘There Is Magic in Suffering’ — The Allure of the Ultramarathon