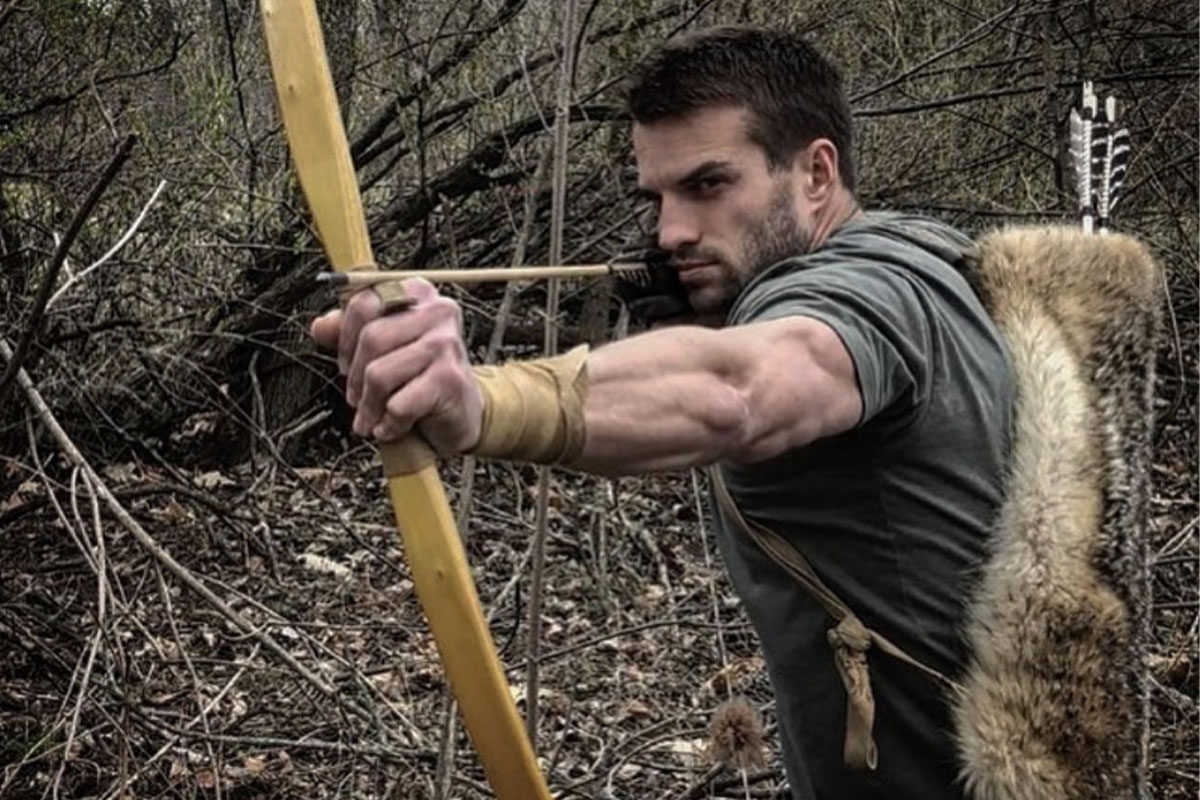 Correy Hawk is more than a renaissance man — he’s a renaissance badass. A Marine veteran, student of the natural world, and teacher of how to live in it, he can spend weeks in quiet solitude deep in the backcountry with the most minimal gear. He can build durable shelter to hold off will-crushing weather, catch fish in a gill net fashioned from deconstructed paracord, build a bow and arrows from the heart of a tree by hand and blade, and then track and kill wild game with a shot from that bow. Badass.

Hawk was attached to the 1st Marine Regiment and served two combat tours with Regimental Combat Team 1 in Afghanistan’s Helmand province as a vehicle recovery operator. After finishing his time in service, he was ready to shift gears. That’s when he rediscovered his passion for archery — specifically the craft and therapeutic nature of bow-making. Thus, Organic Archery was born.

Free Range American caught up with the native Nebraskan and season seven Alone competitor to discuss bow-making, his connection with his chosen medium, and why a bull moose is on his bucket list.

FRA: What drew you to making bows? No pun intended. How’d you land on that craft?

CH: Well, I come from a long line of avid outdoorsmen and archers: my dad, my uncles, and my grandparents. None of them really ever made their own equipment. But archery was always just in my blood. My parents had a bow in my hands by the time I was about 3 years old. Once I got out of the service, I was feeling pretty tired from the deployments. Guess I was kind of just looking for artistic or therapeutic release for stress, you know.

Eventually I purchased a bow and I found out that traditional archery was very therapeutic for me and kind of put me in a deep state of meditation. I started making my own arrows because I was shooting every day after work and was breaking a lot of arrows. So, I decided I’d learn how to make my own arrows to save money. And after about six months of that I decided that it was kind of weird to be shooting these homemade arrows out of my store-bought bow, so I bought a bunch of books and watched a bunch of videos and learned how to make my own bow.

FRA: So, just books and videos? Any sort of mentorship?

CH: Yeah, I never had any mentorship or attended any classes or anything like that. I just read every bow-building book I could get my hands on and watched every YouTube video I could find and dove in headfirst. I started to learn on board bows, which are basically bows made from dimensional lumber that you get at the hardware store. I eventually moved up to staves, which are cut raw from live trees. The bows that are made from the live trees are known as self bows, meaning they’re made from a single piece of wood with no glue or laminates of any kind. I really fell in love with self bows. Once I had the tillering process locked down, the floodgates opened and that’s where I stayed. I’ve been building them for eight or nine years now.

FRA: Making a self bow seems as though it’s a much more pure craft.

CH: They’re definitely unique. I mean, I get the pure feeling from them because you’re taking down a living tree, which I don’t know if you believe in the connectedness of all things, but I definitely do. The spirituality of the forest and nature and everything. You’re cutting down this live tree, and it’s sacrificing its life for you so that it can become your weapon or your companion or an extension of your body. There’s an energy inside of them, and you can definitely feel it when you shoot them. You bond to your bow, and it becomes your faithful woods companion and it provides for you. They’re definitely special. I’ve never built the same bow twice. Every tree is totally different. They’ve all got unique character and challenges. Each bow that comes out of the shop, there was never one like it before nor will there be after.

FRA: Let’s take a quick step back. What is tillering?

CH: The tillering process is basically the careful, systematic removal of wood from a strong area of the bow limb and avoiding the removal of wood from the weak areas of the limb until you’ve created a beautiful, even arc. Before tillering, you choose a desired weight and draw-length for your bow and keep your dimensions and design and finished product in mind.

You rough out a blank, which is basically a bow-shaped stave that serves no functional purpose but is ready for tillering. Then you put it up on a device called a tillering tree — a block attached to a wall with a pulley, handle, and rope that allows you to step back and examine the bend of the limbs. Do I have strong areas? Do I have weak areas? Use a pencil to mark weak areas, and then remove wood from the strong areas. You just keep doing this slowly and carefully, trying to get a perfectly even arc that’s evenly distributing the stress on the limbs.

FRA: Speaking of wood, is there a species of tree that is better than others?

CH: There are definitely trees that are considered better than others. The three things that determine good bow wood are the density of the tree — or the specific gravity — the tension properties, and the compression properties. Two examples would be Osage orange and the Pacific yew, which is a species of juniper. Both have extremely good elasticity, compression, and tension properties and tend to make faster bows, very resistant to scratches and dings, and almost invincible to weather conditions because it’s a very oily wood. But they’re very expensive since they’re found in very limited areas.

I’m trying to shift my focus and open up people’s minds to what’s called the white-wood bow. White-wood trees, which would be like your oaks, your maples, your hickories, hackberry, things like that, they grow abundantly in every environment. So, I’m trying to get people excited about using white-woods that grow locally in their areas. Typically, a white-wood tree grows very straight, very clean, so they’re trouble-free. And they’re so strong in tension that they give a very high success rate for beginning bowyers.

FRA: When did you decide that you wanted to start doing workshops?

CH: Organic Archery has been around since 2018. And for the first two years and some change, I was really focused on custom orders. Demand was getting high, and the waitlist was getting really long. All throughout 2019 and 2020, I was looking at like three months’ lead time. I put a lot of pressure on myself to get these bows out, but I was really getting kind of tired, kind of burnt out.

There were a lot of people that were very interested in classes, so I decided that the only way that I’d be able to facilitate classes is to discontinue custom orders entirely. I want to open up this craft to other people, I really want them to experience the joys of bow-building and have that knowledge for their own self-reliance journey. There’s no experience like crafting a bow with your own hands and then seeing it fire that first arrow with authority just smack home on the target.

FRA: Any celebrities shooting your bows?

CH: There have been a handful of people from the outdoor industry. Donny Dust from the History Channel is one guy who took a liking to my work very early on. When I first got on social media, he asked if he could get a bow and commissioned me for a project. I built him the hackberry bow that he ended up taking on Alone, season six. He’s been beating it to death for over three years now at this point. Rick Spicer, who was also part of the History Channel’s Alone: The Beast show, he actually took a giant bull elk this past September with a self bow that I made for him. I’m also building one for Laura Zerra right now, who I’m sure people will recognize from Naked and Afraid. I don’t want to misquote, you might have to look it up, but I’m pretty sure she’s spent more time in the woods naked than any other survivalist on the program’s history.

FRA: Do you enjoy any other outdoor pursuits?

CH: I’m really big into backcountry exploration, minimalist camping, minimalist survival-type stuff. I like to do a couple trips per year where I go out for 10 days to two weeks deep into the backcountry, whether that’s in the Ozarks or the Rockies, and try to just hang out with as little gear as possible. I’m really into fitness, too. I like lifting weights and trail running and things like that.

FRA: If you could go on an archery hunt anywhere, let’s say anywhere in North America, where would you go and for what?

CH: The one thing that I was hoping to get while on Alone was a shot on a moose. I never did. So, I think my bucket list would be a moose. Whether that’s in Alaska or Canada makes no difference to me. But I would really love to get a large bull moose with my self bow more than anything. My second choice would be an elk. But I keep striking out year after year on elk tags.