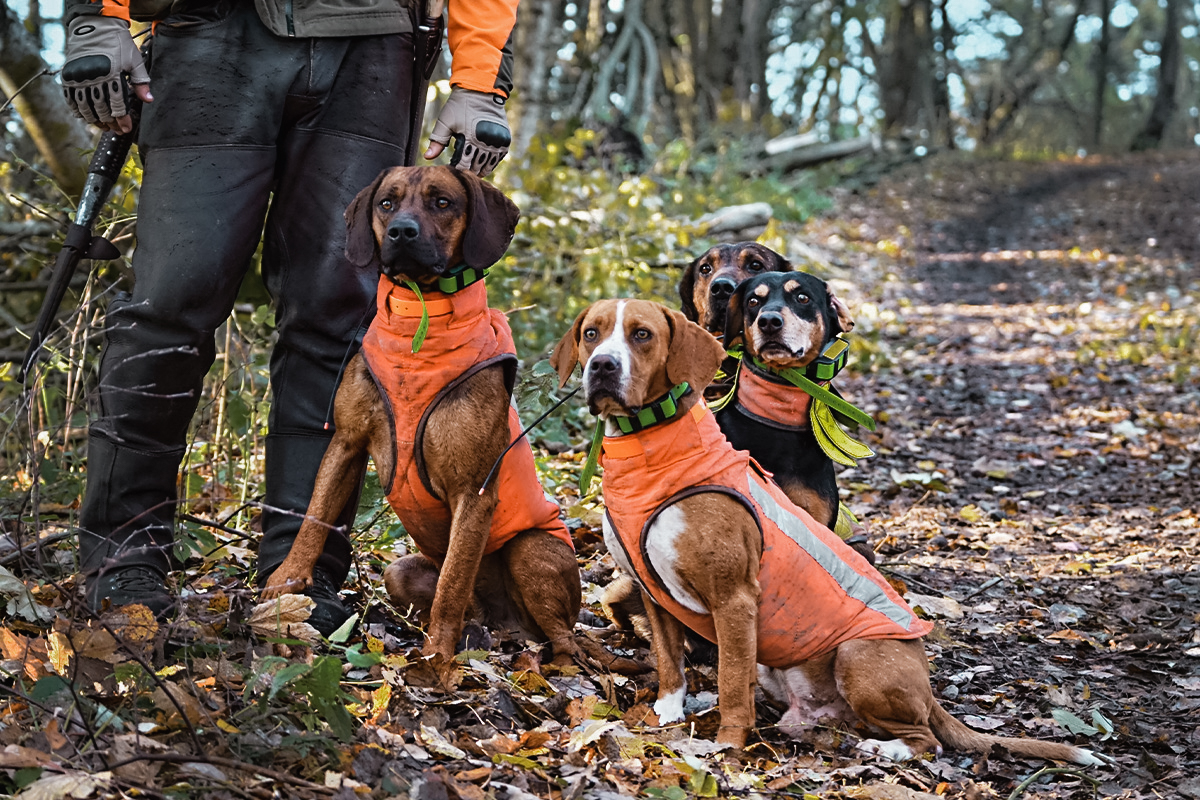 People have used canine hunting companions since the first wolf nervously took a slice of meat from an ancient human hand. Deer hunting with dogs is a natural extension of that aboriginal relationship.

Still, modern hunters have mixed feelings about the practice. Some are ardent supporters of the method. Others consider it unfair and outdated. Let’s take a look at the history of deer hunting with dogs and why hunters are often so divided on the issue today.

Ancient cave paintings show images of dogs and humans hunting together, and when European settlers reached North America in the early 17th century, they brought their hunting dogs with them. Historians believe the first pack of hunting dogs in the American colonies was owned and hunted by Robert Brooke of Maryland as early as 1650.

In Europe, hunting was a pursuit exclusive to the wealthy ruling class. However, once colonists crossed the pond, hunting became a common man’s pastime that was essential for putting food on the family dinner table.

How Hunting Deer With Dogs Works

Although a solo hunter can tramp through the woods with a dog and shoot whitetails on the jump, most dog hunting (a term that doesn’t at all infer shooting dogs, but rather refers to the practice of using hounds to jump and chase whitetail deer) happens in groups.

A group of hunters (or “standers”) surrounds a piece of property before the dog handlers (usually called “dog drivers”) release hounds onto the parcel. The drivers and their dogs work toward the standers until they either jump a deer or pick up a fresh scent.

A good jump dog will squall when he’s on a track, and the rest of the pack will chime in like a chorus. There are few things more adrenaline-thumping than the braying of hot hounds echoing through thick woods, especially when that sound is hastily heading your way.

Experience usually influences the exact positions of the standers. Many hunt clubs use the same blocks of land, sometimes for generations, for so long that hunters know the deer’s preferred escape routes. Those spots will be either numbered or named, and hunters draw for a stand or grab them on a first-come-first-serve basis to cut off the deer as they try to evade the dogs.

RELATED – A Big Buck Expert on Deer Hunting in the Rain

Is It Fair Chase or Not?

One reason hunting deer with dogs is so controversial is because some think the practice unfairly swings the odds in the hunters’ favor.

It’s true to an extent. Dogs will flush deer off their noonday beds and bust them out of swampland so thick that most humans wouldn’t dare venture into it, even with snake boots and brush chaps. When deer turn nocturnal in the late season, dogs often provide hunters the only chance of glimpsing big bucks bent on tucking in until nightfall.

However, both the Boone and Crockett and Pope and Young record books, which have detailed rules of fair chase, recognize bucks taken in front of dogs in states where the practice is not prohibited.

Anyone who thinks deer hunting with dogs is “cheating” seriously underestimates whitetail deer’s intelligence and wily survival instincts. Every hunter with deer dog experience has a story of a whitetail that “gave the dogs the slip.”

Deer in areas with active hunting clubs and trained dogs seem to pick up “dog smarts” early on. Whitetails chased by piles of canines learn how to trick the hounds as a matter of survival. They probably picked up the skills from Mom.

I once watched a big mammy doe and her button-head fawn hoodwink some hounds during the Virginia bucks-only season. I saw them trot across a dirt road well ahead of a braying tussle of dogs. A full minute later, both deer sailed back across the path straight in the direction of the approaching pack. Not so much as a whiff of a hoof touching the lane. Not 30 seconds later, the dogs came through hot, wailing and yapping their way across the path in the same spot the two deer had initially crossed. Unlike the deer that had circled back, the dogs kept going. Eventually, their yowls grew slower, less sure, and spaced apart. They’d lost both deer.

It’s what Terry Jones calls “the old double-back trick.” Jones was a dog driver for decades before he was elected huntmaster for Bacon’s Castle Hunt Club, one of the oldest clubs in Virginia that encourages deer hunting with dogs.

“I’ve seen that one more times than I can count,” Jones told Free Range American. “It’s harder than anybody thinks it is to kill a deer in front of a dog. The deer learn the tricks because if they don’t learn, they don’t make it to the next hunting season.”

Successfully shooting a deer running for his life is no easy feat. Shot opportunities in front of dogs rarely last more than seconds and almost always involve a fast-moving target. Wounded deer are an unfortunate part of the process.

The Southern Tradition of Deer Hunting With Dogs

While deer hunting with dogs was once a fairly common practice across the U.S., the practice is dwindling. Most states have laws that either severely restrict or outright ban the use of dogs to hunt deer.

The Deep South, known for holding tight to tradition, is the last haven for dog hunters. Florida, Mississippi, Louisiana, Alabama, Arkansas, Georgia, South Carolina, North Carolina, and Virginia are the only states where hunters can use dogs during deer hunting season.

Whether you agree or disagree with the use of deer dogs largely depends on where you call home.

Dog hunting in the South intertwines with southern identity, woven into the fabric of Southern culture, and a porch-sitting deerhound is as much a Southern icon as tobacco fields and southern drawls. For many Southerners, asking them to give up their deer dogs is like asking them to quit grits cold turkey. It just ain’t happening.

Some folks consider hunting whitetails over bait unethical. However, there are plenty of areas where the practice is perfectly legal, and a good number of deer hunters fill their tags over a pile of corn without feeling an ounce of guilt.

Hunting with dogs is the same way.

Hunting culture is an awful lot like culture in general — the practices we grew up with are generally considered acceptable. I was raised in the South, which explains my affinity for sweet tea, my overuse of the words “y’all” and “yonder,” and why I have no beef with dog hunters.

Deer seldom pay attention to property lines, and neither do dogs. While responsible hunters will respect them, dogs don’t understand arbitrary boundaries and will blow right past a posted sign when they’re hot on a trail.

According to the Virginia Department of Game and Inland Fisheries, hound hunts for deer historically took place on “farms with contiguous areas in excess of 20,000 acres.” Modern hunt clubs in the Old Dominion typically have access to smaller fragmented parcels.

As large swaths of rural farmland are carved into smaller plots, managing and containing a group of scent-drunk hounds inside invisible borders is practically impossible.

Most modern hunters keep track of their deer dogs with pricey GPS collars. However, many property owners frown upon crossing onto private property to retrieve their hounds.

“Today, dog hunting is so high-tech. With tracking collars and GPS, every dog driver is watching his dogs go through the woods on a screen on his dashboard,” Jones said. “We used to lose dogs or spend days looking for them, but with the new technology, the guys can see the dogs heading towards the roads or pieces of private property and then cut them off before they get there.”

What Breeds Are Used to Hunt Deer

You’re most likely to find hound breeds with hot noses and a strong prey drive, thrumming with electric anticipation in a truckbed dog box on any given weekend of whitetail deer season in the South. Most are treeing walkers, foxhounds, blueticks, beagles, or some mongrelized combination of all four.

Hunting with dogs is an intimate affair, and dog drivers sometimes understand their hounds better than their wives. A good handler can pick out each individual voice in a bawl-and-chop chorus, and he can tell by the pitch and rhythm of the song whether that dog is running hot or following a cold trail.

Old-timers tell tales of their best-running hounds long after those companions lie cold in a grave, the dogs who “could run a two-day trail” or “would run a deer three counties over without falling off.” They tell the stories with affection and a sense of deep respect that borders on awe.

Those relationships, with both the hounds and the hunters, are why seasoned sportsmen like Jones stick with dog hunting.

“I stay at Bacon’s Castle for one reason: dog hunting,” Jones said. “Because I love it; I love hearing the dogs run, and I love the camaraderie, plain and simple.”

Young hunters often have a hard time sitting still and quiet long enough to see the game, but dog hunting can be an exciting introduction to the sport.

The fast pace of the hunt and the dogs’ excitement work well for the short attention spans of some young hunters. And hooking youngsters on the sport is crucial as deer populations rise and hunter numbers decline.

Although hunting deer with dogs is a long-standing tradition, it certainly doesn’t appeal to everyone, which is apparent in the historic chipping away of the practice spanning almost 300 years.

The Virginia House of Burgesses passed the first deer dog restrictions in 1738, requiring owners to confine their canines except when hunting deer.

As dog hunting makes its last stand in the Deep South, not all Southerners are keen on the practice. A 2015 survey of North Carolina hunters indicated that 46% of more than 5,000 deer hunters questioned believed dog hunting should be illegal.

Interestingly, most hunters opposed to the practice had never hunted with dogs.

Perhaps because once you’ve heard a choir of deer dogs singing their way up a river bottom, you’ll be hooked for life. 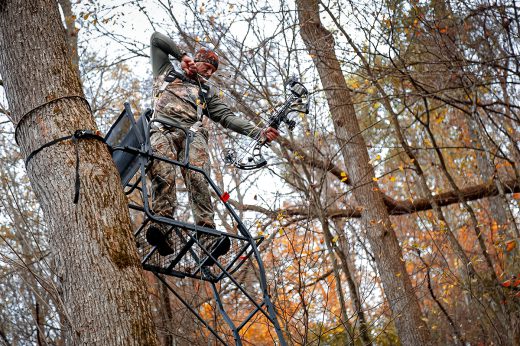