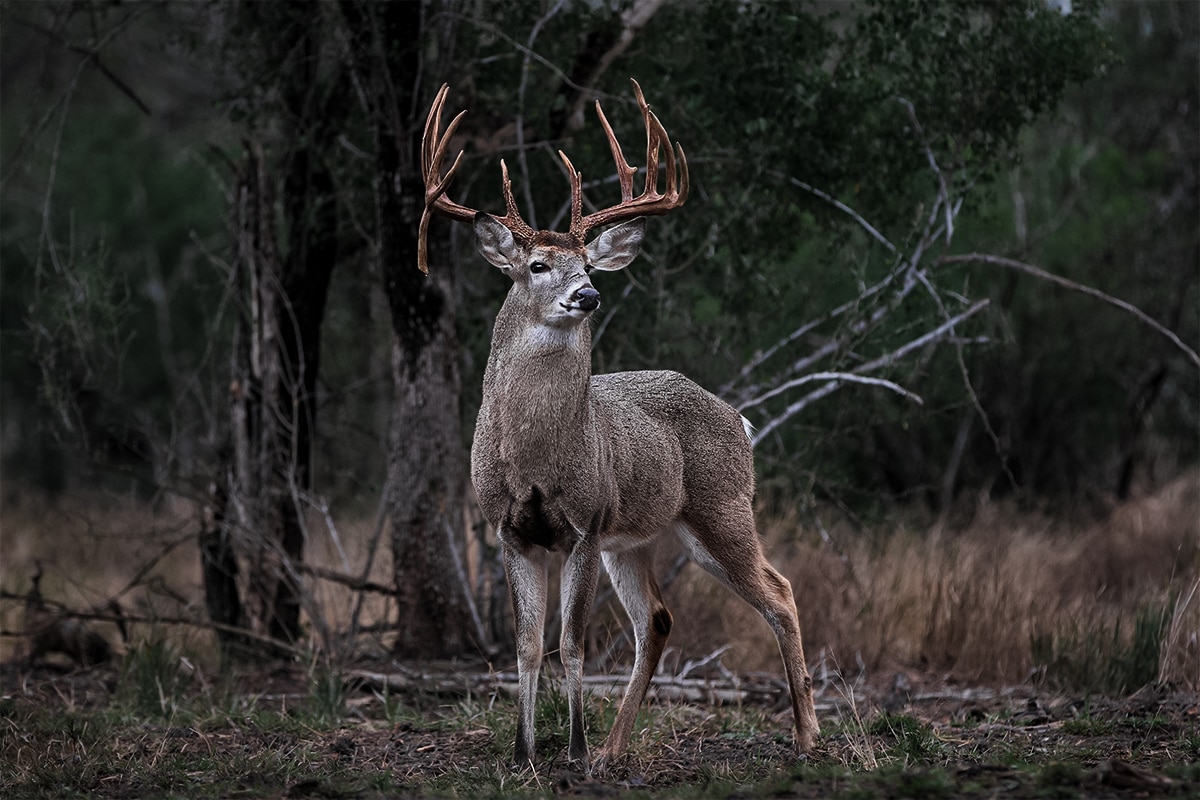 If you spend enough early-morning hours sitting still and quiet in a treestand, you start to ponder deep and vital questions: “What will I do when I run out of snacks? How long can I sit in this stand without using the bathroom? How long do whitetail deer live?”

The whitetail lifespan might seem like a topic only wildlife biologists discuss at dinner parties. But hunters, especially those after record-book bucks, should be just as interested in the subject. These days, hunting buddies are almost as likely to ask after a buck’s age as they are his Pope & Young score. The interest in age is more than just random curiosity; buck hunters want to ensure that wall hanger lived long enough to reach his full monster-rack-growing potential.

How Do We Age Deer?

We have our fellow hunters to thank for a considerable portion of what the world knows about whitetail deer, including how to age them by observing tooth wear and tear.

Whitetail dentistry is a bit of a homegrown science, built over years of observation by hunters familiar with the deer roaming the land they hunt. Tracking individual, identifiable yearlings as they aged through several hunting seasons, hunters noted levels of molar wear on those deer once they were tagged and bagged.

Over years of comparing known deer age with measured molar erosion, citizen scientists (also known as regular Joe hunters) and some data-collecting wildlife managers determined that a deer’s teeth typically wear down an average of one millimeter each year.

It takes a whitetail about 10 1/2 years to wear its teeth down to the gum line. When a deer lives past the one-decade mark and has to start gumming his acorns, pinpointing his age becomes a lot trickier.

We can also thank Dr. Leonard Lee Rue III, author, whitetail expert, and the most published wildlife photographer in the U.S., for much of what we know about the whitetail lifespan. Still kickin’ it at 96, Rue knows a thing or two about longevity.

Rue documented the ages of farm-raised and wild deer dating back to the 1930s and found that it wasn’t uncommon for captive deer to live more than 20 years.

Even his oldest recorded wild whitetail lived to the ripe old age of 19 1/2, a fact that might make you pause that itchy trigger finger the next time you have a 5 1/2-year-old shooter buck lined up in your crosshairs. That mature buck just might have a few more years of antler growth left in him.

So How Long Do Whitetail Deer Live, on Average?

While a super-lucky (or super-smart) wild whitetail might make it to 15 years of age, it isn’t particularly common. The average lifespan of a whitetail roaming the wild is a mere 4 1/2 years.

One of the most significant factors affecting how long a whitetail will live in the wild is its location. Harsh winters and severe weather can take a serious toll on deer populations. Wild deer understandably live longer in areas with strict, quality deer management and a mild climate, like Texas and Georgia.

Living on public land can also shorten a deer’s lifespan. Research conducted by the National Deer Association found that only 37% of 1 1/2-year-old bucks residing on public land make it through deer season. In contrast, yearling bucks that call private land home have a 75% chance that they won’t end up in someone’s freezer.

It’s a well-established fact that human men live shorter lives than their wives, mothers, and daughters. The same is true of whitetails, but the average lifespan of deer has nothing to do with work stress, careless use of ladders, or “toxic masculinity.”

“Females of almost all species of mammals, including humans, just live longer,” Rue says in his influential book The Deer of North America. “The males of most species are usually 20% larger than the females. Perhaps males are worn out sooner by this extra weight and the extra food that has to be eaten and processed to achieve and maintain this weight.”

It’s possible that, because male deer are toting a lot more weight than the average doe, their lives are shorter by about two years on average.

With square meals, fences to keep out predators, and sometimes vaccinations to quell disease, captive deer have a much easier time staying alive than their free-roaming brothers and sisters. Living in the wild can be much more challenging to survive.

Diseases are a significant concern for many wild whitetail populations. Outbreaks of epizootic hemorrhagic disease (EHD) and chronic wasting disease (CWD) are a looming threat in some areas of the country. Both diseases can quickly wreak havoc on local deer populations.

Outbreaks of EHD, a disease transmitted by biting midges and other small insects, are somewhat sporadic but have devastating consequences. Although some deer recover and develop lasting immunity, most infected whitetails succumb to the disease within 36 hours.

CWD is a fatal, highly contagious neurologic illness that affects cervids, including elk, mule deer, blacktail deer, sika deer, and whitetails. Cases of the disease have been confirmed in 30 states, four Canadian provinces, and several European countries, including Norway, Finland, and Sweden. Because the disease affects the brain and central nervous system, it can be difficult to diagnose based on observational symptoms alone.

Accidental anomalies like a deer getting hung on a fence or two bucks getting their antlers tangled in a tussle also contribute to the wild whitetail death toll.

Life Is a Highway

Some of those accidents are caused by drivers swerving to miss deer, leaving the offending whitetail completely unscathed. However, many whitetails die from the impact. The good news is that most states will let you keep your roadkill, although salvaging edible meat may not be easy.

If a deer does survive the initial collision, it may wander off to die slowly from injuries or become easy pickings for local predators.

Making It Past the First Year

Humans aren’t the only animals that enjoy the taste of venison. Young fawns make easy prey for predators like coyotes, black bears, bobcats, and mountain lions. Even with an attentive and protective mother, a young whitetail has a good chance of becoming the main course on a predator’s menu.

As coyotes continue to extend their home range, they pose a significant threat to some whitetail populations. Multiyear research conducted by the South Carolina Department of Natural Resources reported a 70% total fawn mortality rate. Researchers confidently attributed approximately 80% of those fawn deaths to coyotes.

GOOD GEAR – For All of You Night Riders Out There, Enjoy the BRCC Murdered Out Coffee Roast

What Kills Most Whitetail Deer? Hunters Do

With 5.5 million deer ending up as venison steaks, burgers, and jerky each year, hunters are the single most significant cause of whitetail deaths. However, without whitetail hunting seasons, local deer populations could quickly exceed what the land can sustain.

North American hunters regularly tag does that are 5 1/2 to 8 1/2 years old each hunting season. At only 4 1/2, the average age of hunter-killed bucks is much lower, so if you tag one that’s reached the half-decade mark, you’ve bagged yourself a real trophy. 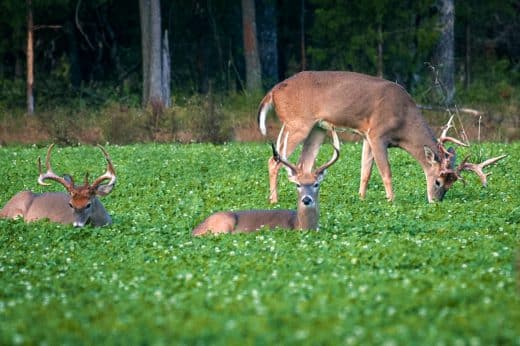 Whitetail Institute: The Staying Power of the Food Plot King 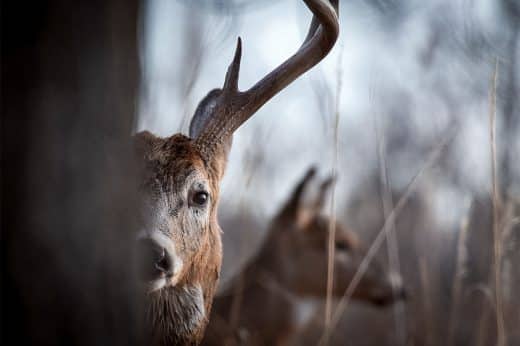 Learn About the Gestation Period for Whitetail Deer to Kill Bucks