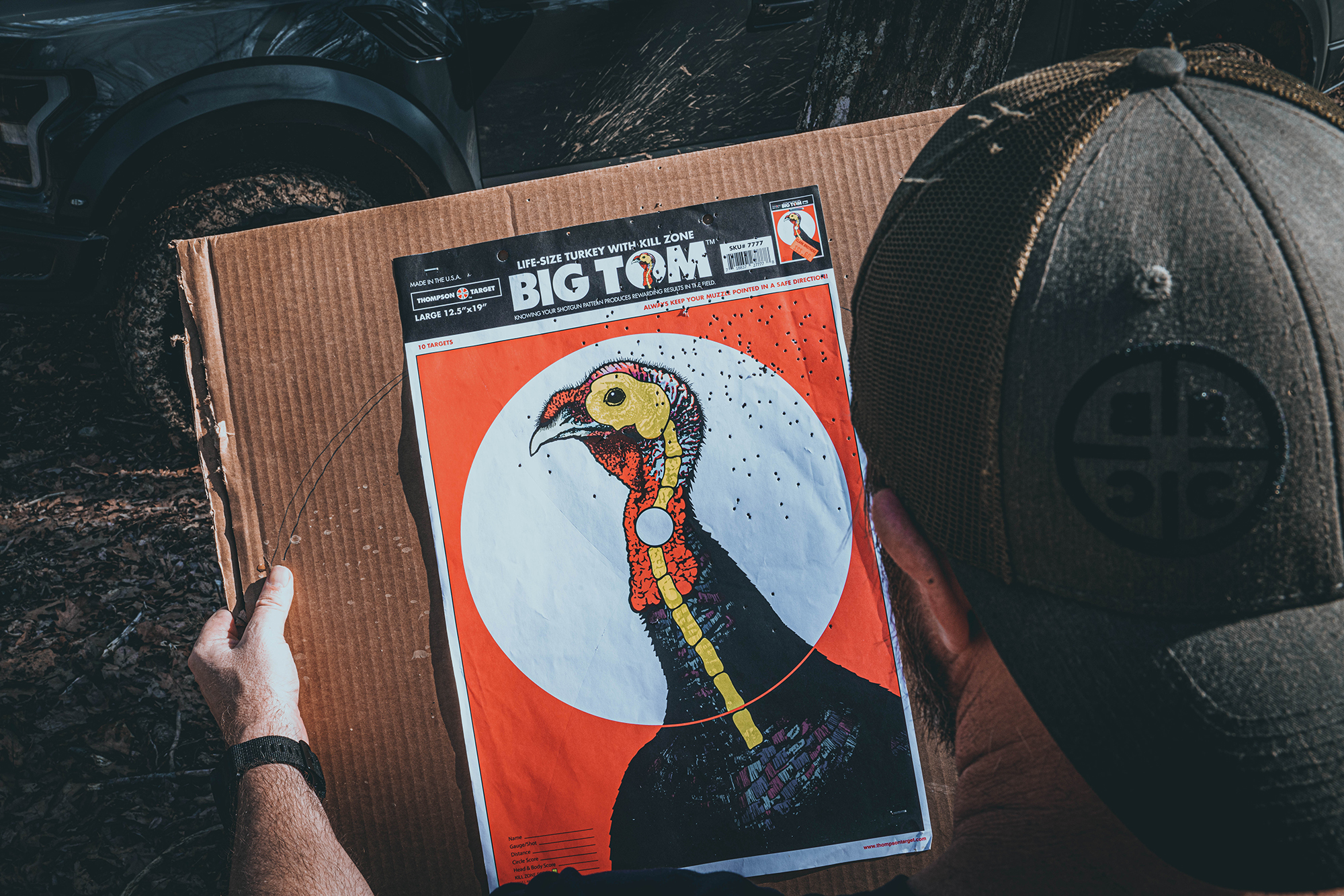 Many hunters go their entire lives taking the just let ‘er eat approach to shotgunning. And they never truly know where their shot is flying. These are the hunters who routinely whiff on gobblers that go scuttling off to roost another night. Then they wonder, “Why can’t I shoot for shit?” It’s possible their shooting skills are fine, and they just need to pattern their dang gun. Why do hunters pattern their shotguns? Because it’s vital.

Shotgun patterning for turkey hunting is a simple process during which you test the effectiveness of your shotgun, choke, and ammo combination. For the uninitiated, this is why you must pattern your turkey gun before a hunt.

Why Do Hunters Pattern Their Shotguns?

Would you head to your tree stand without tuning your bow to your broadheads? How about setting up for a shot with a scoped rifle that’s not zeroed? Well, heck no. Your shotgun is no different.

You need to know the effective range of your choke and shell combination with a particular gun, and you need to know if that combination is throwing a solid pattern: an even distribution of pellets with a high-enough concentration to be lethal. And because turkey hunters are looking to send a tight pattern as far as possible, the margin of error is smaller than with other shotgunning tasks.

A turkey hunter must also consider point of aim versus point of impact. If a new hunter buys a “turkey shotgun” with a bead and assumes that bead will match up with the center of their pattern, they most likely will be very disappointed.

For example, I hunt everything from waterfowl to squirrels with a 20-gauge Benelli M2. Benelli shotguns traditionally pattern high so the shooter can “float” their target, meaning they can still see the target while they aim instead of covering the target with the barrel. But you can’t even count on that.

Your specific gun might not pattern as the make and model typically does. It might be even higher; it might be dead on. Patterns can also displace right or left, depending on the load, choke, and barrel length. You simply don’t know until you test it with the ammo and choke you’re going to use in the field.

Setting Up a Shotgun for Patterning

Set up a shotgun for patterning the same way you would set up a rifle to zero an optic. Set the shotgun on some solid shooting bags, a solid rest, or a sled. You can get away with using a table or truck tailgate, but as usual, a shooting bench is best. Be sure to get a solid cheek weld for each shot to remain as consistent as possible from shot to shot.

If you’re starting from scratch with a new gun, you want to shoot at a pretty big target. Snag a large piece of cardboard or a big roll of butcher paper and some wooden uprights. Staple the cardboard or paper to the uprights so you have a 3 x 3 foot target — large enough to contain a 30-inch circle.

Draw 10-inch diameter and 30-inch diameter circles around the densest part of the pattern on the large paper target. Observe the distribution of your pellets within the circles and count how many hits you have in each.

In general, a good pattern is evenly distributed with a high percentage of the pellets concentrated in the kill zone. Keep in mind that there is no such thing as a totally even pattern. All patterns are denser in the center and sparser at the edges. That said, a good pattern for waterfowl is different than a good pattern for turkeys.

Ducks, geese, and upland birds are usually shot on the wing and while the shooter is swinging the barrel. That means it’s necessary to see pellet distribution over a wide kill zone.

Since turkeys are shot with a dead hold, and often at farther distances, you want a tight pattern within a 10-inch circle (about the size of the turkey’s head and neck). There are many experienced turkey hunters that say you need to see at least 100 pellets hit inside that circle for a reliable kill, but I’ve heard others say that it’s okay to have as few as 80 pellets; but if your pellet count is closer to 80 than 100, that distance is probably a bit too far for a reliable kill.

If you are getting wildly inconsistent or unsatisfactory patterns from shot to shot, assuming the gun is functioning correctly, you might want to change up your ammo choice or your choke. Same answer if you aren’t getting enough pellets in the kill zone. Switching from an XX-Full choke to an Extra Full might be all it takes.

Sighting In a Turkey Gun

Once you know you’re gun is printing consistent and lethal patterns, it’s time to dial in your shotgun so you can actually hit what you’re shooting at.

Sighting in a turkey gun is a lot like sighting in a rifle. You can get away with using just a bead, but your accuracy and range will be limited. If you want to stick with irons, and lots of hunters still do, you want to go with front and rear adjustable rifle-style sights. Your other options are a red-dot sight or a low-powered magnified scope. These days, a lot of turkey hunters prefer red dots.

Whatever sighting system you’re using, the goal is to get the point of aim to match the point of impact at the center of the densest part of the pattern. Throughout the process, be sure your shooting form is solid and consistent, including a good cheek weld.

Now, you’re sighted in and can see how your choke, ammo, and shotgun combination will pattern at different distances to determine your maximum effective range.

The standard advice is to pattern your choke and ammo combo at 40 yards, but that doesn’t give you enough information.

Turkey choke constrictions are tighter than other chokes to increase lethality at longer ranges. But turkeys are wily critters. You might have to take a shot at 50 yards, or a tom might pop up in front of your blind at 10 yards.

If you don’t know how tight your pattern is at close range, or you don’t know where to hold your aim for such a close shot, you’ll likely throw a baseball past his head, and then listen to him putt as he scurries off.

I pattern my turkey gun at 15 yards and at 40 yards. I choose these distances because they offer a bracket – I’ve shot my last three turkeys inside of 20 yards, and 40 yards is my max range. Also, if my point of aim, point of impact, and pattern look good at 15 and at 40, I can deduce that it will look good at all the ranges in between.

Could I also shoot at 25 or 30 yards? Sure. Would I learn enough to justify burning the ammo or beating up my shoulder? Probably not.

Turkey targets come in handy here. Reactive or otherwise, they provide an easy way to tell exactly how many pellets you’ll get on target, which will let you dial-in your gun better and give you more confidence in the field.

If you think you might take a shot on a bird at 50 yards or more, try it on targets first. At this stage, don’t take your shots from a bench, take them from shooting positions you will use in the field. This will let you better know your limitations and the limitations of your turkey gun.

RELATED – Turkey Hunting Gear: New Stuff You Just Have to Have for the Spring

Understanding a little about the properties of the metals used to make shot pellets could save you a lot of frustration — and save you from ruining a choke or barrel. And a little shot-size knowledge limits head-scratching when you change loads.

Lead and bismuth are nearly equal in terms of hardness and density, so they throw similar patterns. Tungsten and Tungsten Super Shot (TSS) are denser and harder than steel, lead, and bismuth, meaning they will pattern tighter than the rest at greater distances. Only shoot tungsten and TSS through TSS chokes — otherwise, it could tear up your choke tube.

Don’t just let your shotgun eat. Pattern your choke and ammo combinations at different distances. Count the pellets. Adjust until you’re lethal. Yes, with ammo prices the way they are today (high-quality turkey shells can cost well over $10 per round), this can be an expensive process — but when you fill your spring tags and have a true turkey slayer of a shotgun, it will be worth it.

If any of those three variables — shotgun, choke, ammo — changes for any reason, (a lot of hunters have to make due with whatever ammo they can find) you simply must to hit the range before you hit the turkey blind.

READ NEXT – Modern Turkey Loads: Worth the Money, Maybe 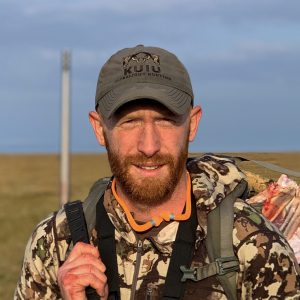 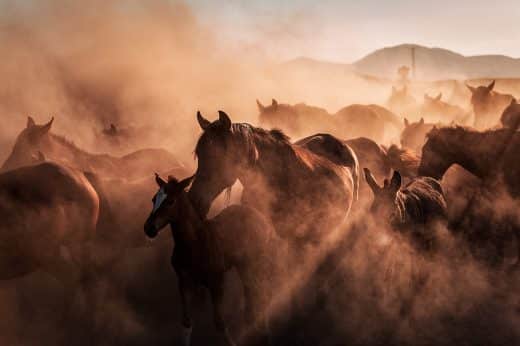 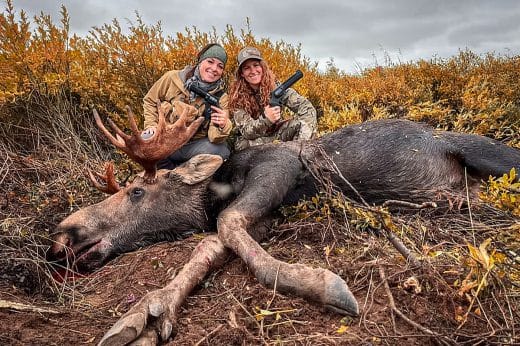